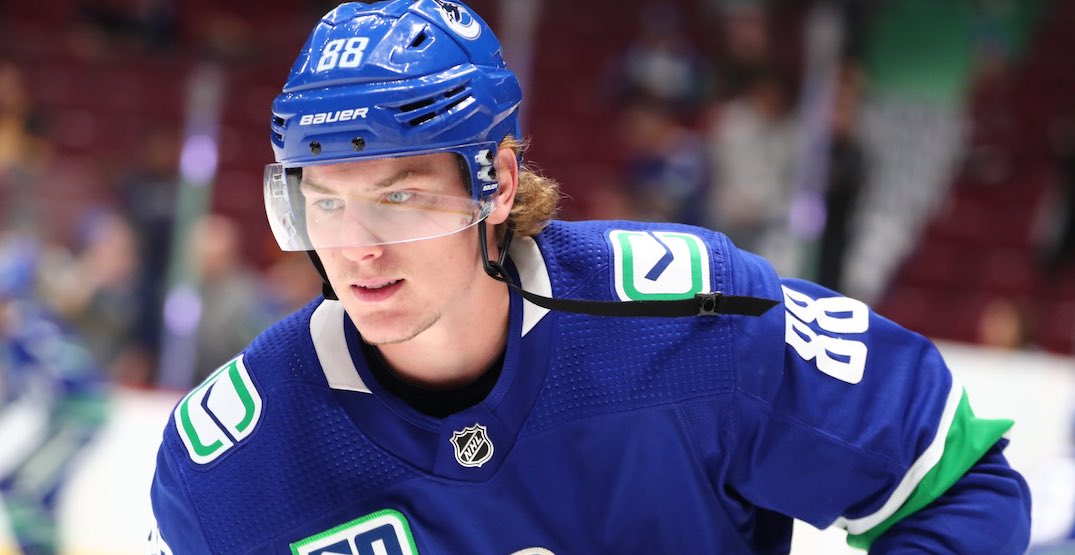 Adam Gaudette is feeling a lot better heading into this season, on and off the ice.

The 24-year-old revealed today that he has been dealing with a stomach problem ever since high school, which prevented him from eating full meals.

“I would get sick in the mornings randomly,” Gaudette said during a virtual media conference today. “This has been going on for years and it’s always been a struggle for me to put on weight.”

Gaudette said he had an overgrowth of Candida in his stomach, causing him to feel nauseous.

“It’s like a yeast infection in my stomach,” he said.

It wasn’t until this offseason that Gaudette realized he had something wrong with him. In response, he’s changed his diet and he says he’s feeling much better.

“My nutritionist caught it, we’re attacking it, we’re working with the doctors here in [Vancouver],” he said. “I’ve got a great team around me, supporting me right now.

“It’s going to take a pretty long time to get back on track, and get to where I want to be, but we caught this thing now and I’m thrilled about that because I just feel much better and I can eat more. I’m hungrier more throughout the day and it’s helping my energy on the ice and it’s helped with my sleep schedule, my lifestyle. I couldn’t be more thrilled about figuring this out now and I just feel so much better and it’s just such a heavy weight off my shoulders.”

Gaudette, who is officially listed on NHL.com as 6-foot-1 and 170 pounds, says he’s actually lighter than last year, when he was tied with Quinn Hughes as the lightest player on the team. Putting weight on will take time, he said, though he added that he’s actually stronger and quicker now.

“I just thought I was always a kid who never really liked to eat… turns out I had something wrong with me. It’s just such a relief that we figured it out and my whole world’s changed for the better.”

While Gaudette is a lock to make the Canucks’ opening night roster this season for the first time in his career, he still has a lot to prove. He showed he could score at the NHL level last season, notching 33 points (12-21-33) in 59 games, but there are areas for improvement.

Gaudette has been working on faceoffs, trying to improve on his 41.2% success rate in the circle last year. He’s also hopeful to get time on the penalty kill, saying that he’s reviewing tape this offseason.

If Gaudette is going to fulfill his potential as a two-way centre, he’ll likely need to put on weight to combat bigger players in his own end. That would be a major development for the Canucks, as Sutter is better suited as a fourth-liner at this stage of his career.

Last year, Gaudette gave the third line a much-needed pop of offence. But if he and the team want to get to the next level, his defensive play will need to shine through also.