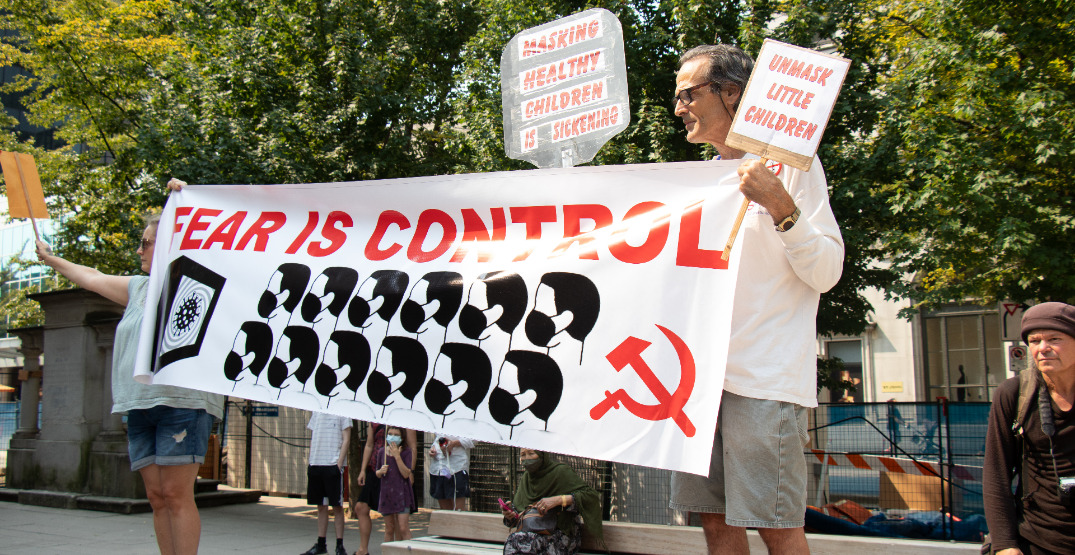 An anti-mask protester at a Vancouver rally. (Margarita Young/Shutterstock)

Two separate protests have been planned for Downtown Vancouver on Wednesday afternoon, including a climate change demonstration and an anti-vaccine passport protest.

The climate change protest, called the “On Fire Day of Action in Vancouver,” is taking place outside the CBC building at 700 Hamilton Street at 11:30 am.

“Canada is STILL on fire,” reads a press release from organizers behind the climate rally.

A short march is scheduled, and speeches will be directed towards political leaders in the upcoming federal election.

Organizers point to the summer’s extreme heat and wildfires across the province as primary motivators behind this call to action.

The second protest is a follow-up to the protests that took place in Vancouver last week.

The group behind it, “We Are All Essential,” targets city halls across the province and country. Attendees plan to meet at Vancouver City Hall at 1 pm.

A message from the event poster reads, “Vaxx or unvaxx, mask or no mask, stand together. Reject the tyranny of vaccine passports.”

They suggest the protest is to empower businesses, employees, and shoppers.

This planned protest comes exactly one week after hundreds of protesters shut down traffic near Vancouver City Hall. It also comes a day after the BC government announced the full details of how the BC Vaccine Card will work.