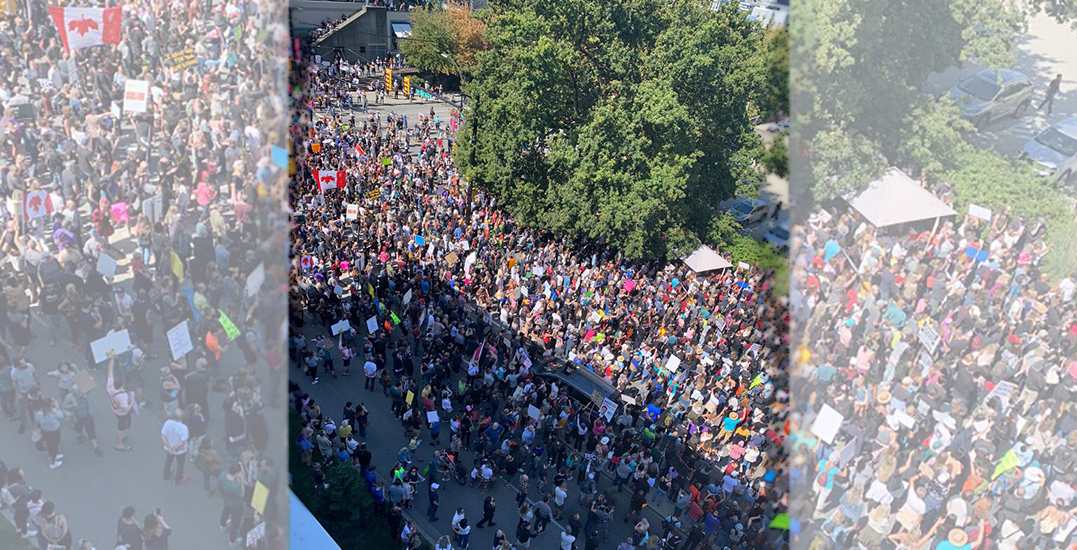 Hundreds of protesters have shut down traffic around Vancouver City Hall and the Vancouver General Hospital.

The rally, “My Body My Choice,” began at approximately 1 pm at VGH. The event is meant to protest the mandatory vaccine policies being implemented across Canada.

Photos and videos shared across social media show large groups of protesters, many of whom aren’t wearing face masks or practicing physical distancing.

Antivaxx protesters @VGH. They’re free to voice out their opinion but they are rude & inconsiderate. Screaming, revving up their engine, cluncking whatever, blocking traffic when there are fragile patients around.@CTV @GlobalBC @dailyhive @CBCVancouver #selffish #disrespectful pic.twitter.com/AWb5IPJScZ

Bunch of people on 12th, by VGH. Can’t tell how many. A few thousand, for sure. pic.twitter.com/GGhIys98PB

And you idiots at City Hall. pic.twitter.com/sz4slJamJd

Just drove by the anti-science group protesting near VGH and spotted an 8-year-old with a sign proclaiming “My Body My Choice.”
Wonder how true that is…

Another sweep of the protestors outside of Cambie and 12th at Vancouver city hall. Protesting governments COVID-19 measures. Couple of cars stuck in the crowd. Speaker talking about communism. #vancouver #COVID19 @CKNW @MikeSmythNews @GlobalBC pic.twitter.com/q9xrpmoAKl

Ambulance with flashing lights makes it was through anti-vaxx protestors at Vancouver City Hall. 12th and Cambie is an essential route for emergeny vehicles. @CKNW @GlobalBC pic.twitter.com/bZmQsx8eqm

Speaker Laura Lynn (not sure how to spell – not a follower) addressing the crowd of protestors against governments COVID 19 measures and vaccines. Takes aim at @JustinTrudeau and Dr. Bonnie Henry. Chanted “lock her up” after. @CKNW @GlobalBC @MikeSmythNews @JasJohalBC pic.twitter.com/j3RbtIISZO

The Vancouver Police Department has asked drivers to avoid the area of 12th and Cambie. At this point in time, it’s unclear how long protesters will remain in the area.

#VanTraffic: Drivers are asked to avoid the area of 12th and Cambie, as a large group of protestors make their way from VGH to City Hall.