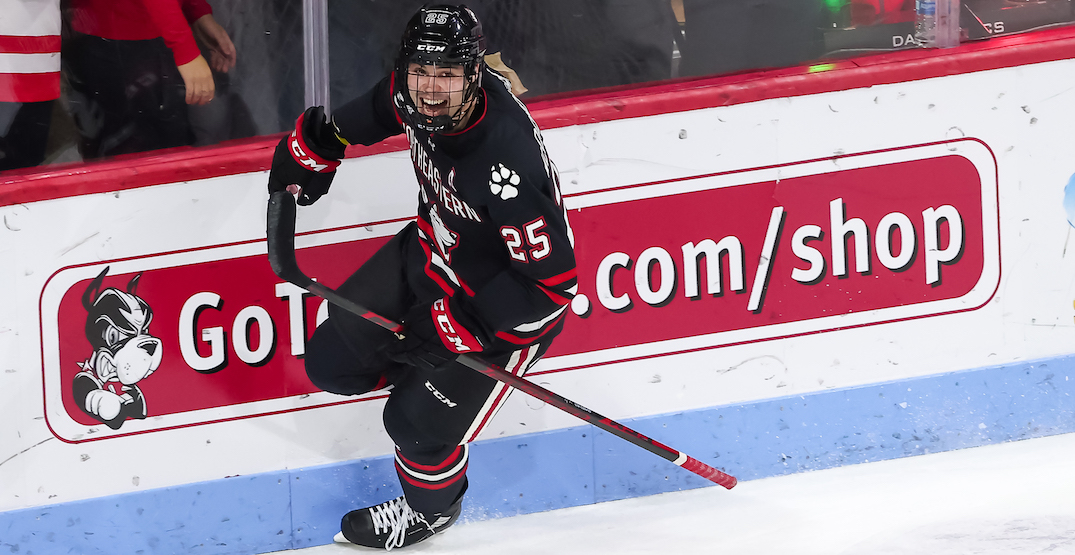 Aidan McDonough’s third season of NCAA hockey is over, and now he has options.

The Vancouver Canucks prospect scored the game-tying goal for Northeastern University with 3:20 left in the third period, before his team lost to Western Michigan in overtime. That ended Northeastern’s quest to get to the Frozen Four in the first round of the D1 men’s ice hockey championship.

What! A! Goal! Aidan McDonough (#Canucks) dekes past the Western Michigan defender, drives the net, and buries the puck to tie this game at 1-1 for @GoNUmhockey.

The 22-year-old will now have the option of turning pro or returning for a fourth season at Northeastern.

If he decides to stay in school, that will set off alarm bells with the Canucks, as it would make him eligible to bolt as an unrestricted free agent in the summer of 2023.

The Canucks would surely love to sign the 6-foot-2, 201-pound forward to an entry-level contract now, ensuring they hold onto his rights. It’s exactly what the Canucks did with Adam Gaudette four years ago.

.@DhaliwalSports just now on the show "Some feel Aidan may return for his senior year, no official decision made yet."https://t.co/h4e2SKLzpb https://t.co/erUZg61y7D

A seventh-round draft pick out of the USHL, McDonough’s value has gone up considerably since the Canucks picked him in the 2019 NHL Draft in Vancouver.

McDonough led his team in scoring this season, at better than a point-per-game clip, with 38 points (24-14-38) in 37 games. In three NCAA seasons, the Massachusetts native has 85 points in 89 games.

The NHL season is running late this year due to the planned Olympic break. If they sign him now, it would allow the Canucks to get McDonough into at least four weeks of pro games, whether that be in Vancouver or Abbotsford. Vancouver’s season wraps up on April 29, while Abbotsford’s last regular season game is April 30.