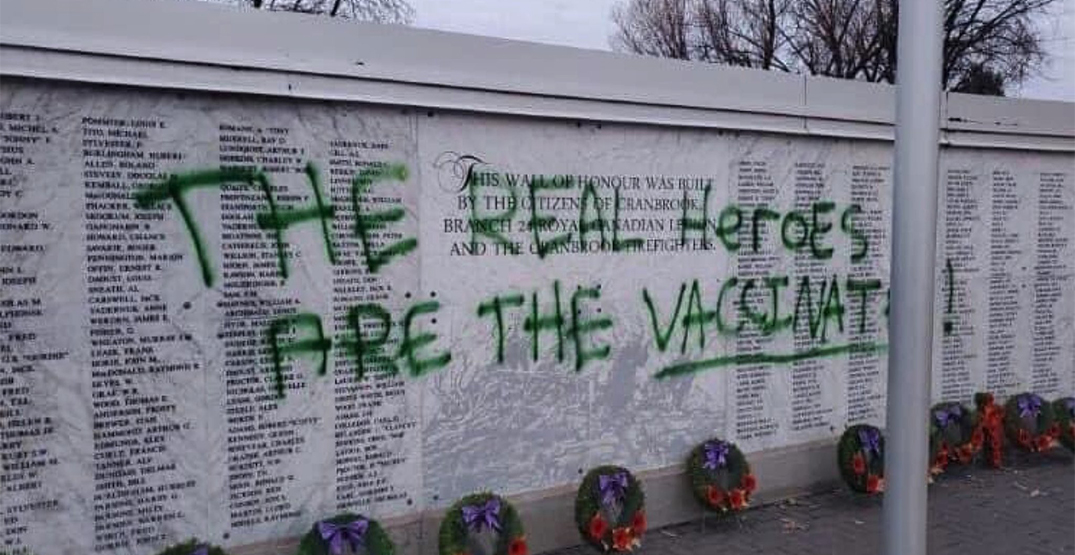 People opposed to COVID-19 vaccines are typically the ones making headlines for their obnoxious behaviour, but one small BC city saw its Remembrance Day monument defaced with graffiti supporting vaccination on Thursday.

Someone used green paint to write “the real heroes are the vaccinated” on a cenotaph displaying names of fallen soldiers in Cranbrook, BC ahead of Remembrance Day ceremonies.

A local witness alerted the City of Cranbrook to the vandalism, and police and firefighters washed the graffiti away before the ceremonies took place.

“As a community, we are beyond disappointed by the disrespectful actions of those responsible for defacing such an important monument on such and important day for all Canadians,” the City said in a Facebook post.

“This act does not speak to the character and values of our citizens and our community.”

After removing the graffiti, The City of Cranbrook said Remembrance Day ceremony attendees were able to focus on honouring veterans.

Daily Hive has reached out to Cranbrook RCMP to ask whether a suspect has been identified, but police have not yet responded.

Over in Kelowna, a group of people protesting against the COVID-19 vaccine mandates disrupted a Remembrance Day ceremony, with one demonstrator taking over the microphone before ceremony organizers regained control.