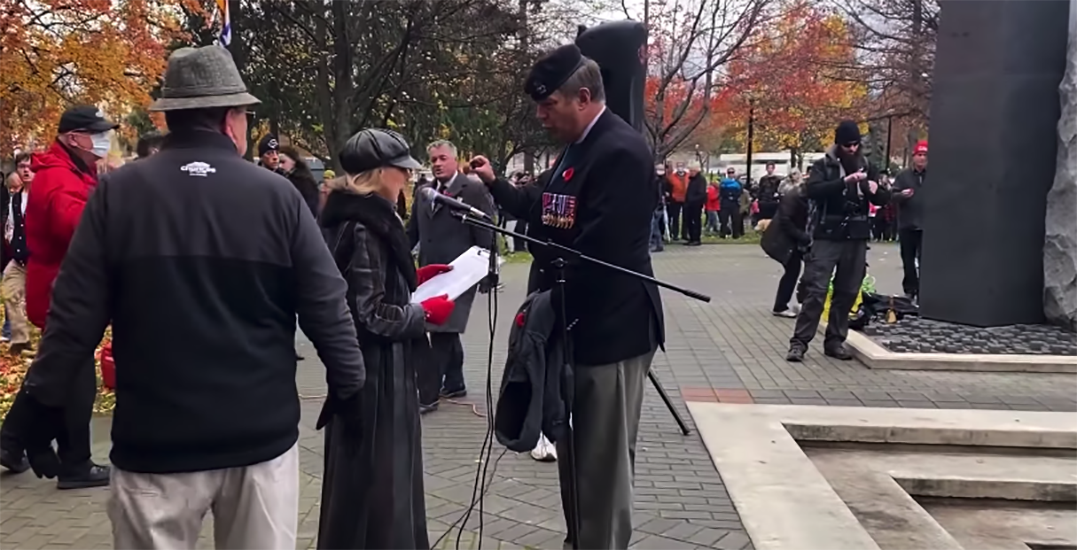 A Remembrance Day ceremony in British Columbia was interrupted by a group who appeared to be protesting against the COVID-19 vaccine.

The unofficial gathering took place on Thursday at City Park in Kelowna, BC; a video of the disruption was captured and shared by Kelowna Now.

Protesters appear to begin speaking after The Last Post is played. The video also shows dozens, if not hundreds, of residents in attendance.

“I am fighting for the freedom that our soldiers died for,” a protester speaking into a microphone says. “Have you forgotten? You have forgotten.”

Members of the crowd can be heard booing and yelling at her to get off the Cenotaph, while some yell “how dare you” and “not today woman.”

Another man walks up to the woman and says “It is not about you. It is about our veterans.”

Meanwhile, a small physical exchange appears to break out between protesters and a man who attempts to disconnect the speaker system that is attached to the speaker’s microphone.

The video also includes a short interview with Legionnaire Ken Hoegson, who expressed his disappointment in what transpired.

“I felt that every one of us that came here was violated today,” he said. “We’re here to remember the people that gave them that freedom. Gave them the freedom that they’re using but they’re abusing it.”

Daily Hive has reached out to RCMP and will update the story when more information becomes available.