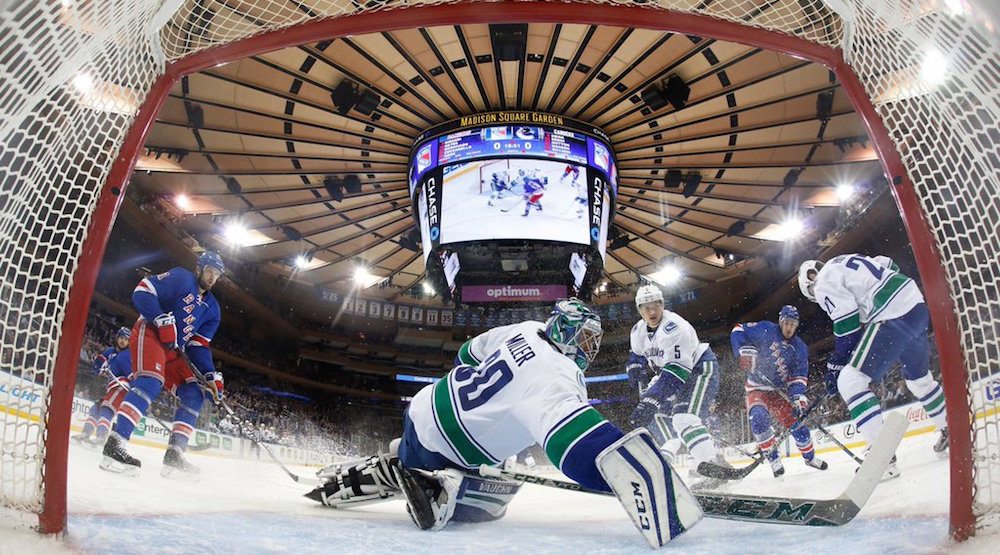 The Vancouver Canucks finally got a lead on Monday night against the Islanders – a rarity this season – but suffered yet another loss on their six-game road trip.

Tonight they take on Alain Vigneault’s red-hot Rangers trying to avoid a franchise-worst 10th straight defeat. They’ve got their work cut out for them.

The Canucks will be making a pair of lineup changes, as Troy Stecher draws in for Philip Larsen, and Jacob Markstrom gets the start in goal.

Chris Tanev remains sidelined for the Canucks defence, and Jannik Hansen will miss his second game since being put on injured reserve with a shoulder injury.

Jake Virtanen, once again, will sit out as a healthy scratch.

Last night’s loss moved the Canucks losing streak up to nine straight games, a number they’ve reached only six other times in their history. It’s only happened one other time in this century, which was last season from March 14 to 29.

Should the Canucks lose tonight, it will match the team’s franchise losing streak of 10 straight games set back in 1997, back when this guy was their captain:

Needless to say, the Canucks are desperate for a win.

The odds aren’t exactly in their favour. This is the fifth road game in seven days for the Canucks, and they’re matching up against one of the hottest teams in the NHL right now.

2. Rangers firing at will

#Canucks lost badly to a struggling Isles team and face the top scoring Rangers tomorrow. This is fine. pic.twitter.com/PddU7aUwtv

It’s beyond unfavourable – tonight’s game against the Rangers is a nightmare matchup on paper. The Rangers have scored an NHL-best 55 goals this season, including 26 on their current five-game win streak. Meanwhile, the Canucks have just 22 goals this entire season.

Individual stats are just as lopsided, where the Rangers have a whopping 13 players with more points than Vancouver’s leading scorer.

The Rangers currently have a goal differential (+23) that is higher than the amount of goals the Devils, Canucks & Colorado scored all year

For as good as New York has been offensively, they’ve been one of the best shutdown teams as well. They average just 2.23 goals against per game, good for fourth best in the league, and the Rangers have also been among the best shot suppression teams.

The only thing working in the Canucks’ favour: they won’t see Henrik Lundqvist tonight, as back-up Antti Raanta is expected to get the start in goal.

3. Is Horvat getting enough ice?

Willie Desjardins has had no shortage of critics when it comes to his player usage, and last night’s game certainly won’t help in that regard. Bo Horvat is tied for the team lead with four goals, but his ice time against the Islanders was not far off of what you’d give a fourth liner.

Here’s a look at some of the even-strength ice time numbers from last night:

Though he also plays on the power play and penalty kill, it’s clear that Horvat has probably been the biggest offensive threat for the Canucks not named Sedin.

Horvat got 1:30 of power play time last night, and he made the most of it, assisting on the Granlund goal for his first assist and fifth point of the campaign.

Third goal of the season for Granlund. Excellent pass from Horvat; Hutton with the other apple. pic.twitter.com/jN9By1QlMF

The Canucks are struggling to score goals, shouldn’t they be giving more minutes to players who can actually put the puck in the back of the net?

There are a ton of reasons why Vancouver should lose this game, but being the perplexing team they are, I can’t help but feel like the Canucks will actually come away with the win tonight.

A monster performance from Markstrom and a couple of goals from unlikely sources will have the Canucks pulling off the upset at Madison Square Garden, 3-1 over the Rangers.