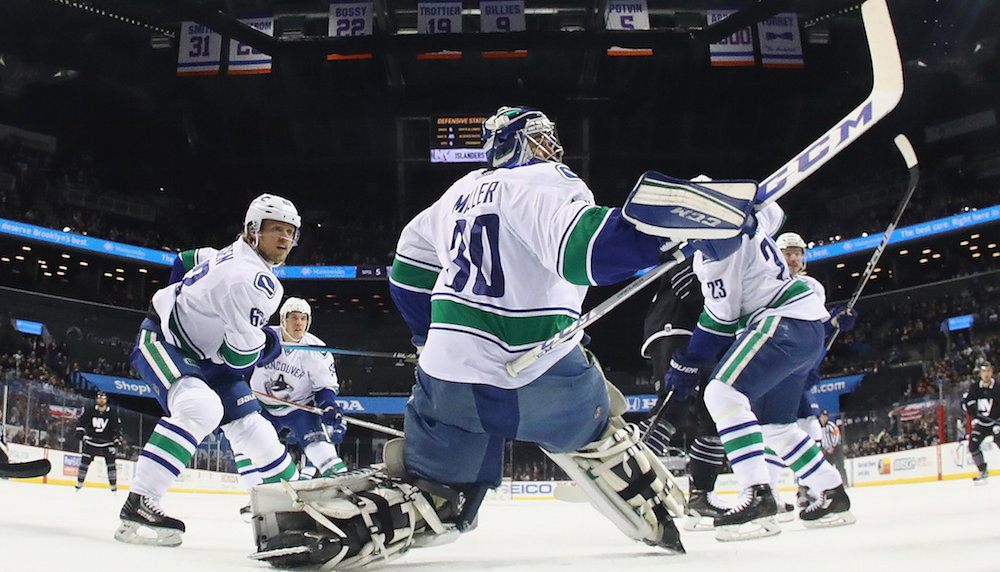 Vancouver was supposed to be galvanized after Saturday’s brawl against Toronto. Jannik Hansen stuck up for Daniel Sedin. Ryan Miller took on a giant to protect Troy Stecher. The team had heart and now they were going to take on the world.

They scored four minutes into the game, actually had a lead in a game, and they weren’t going to look back.

Member the start of Vancouver’s season?

Member when the #Canucks were 4-0? Awwww I member… pic.twitter.com/gbYVywzARf

That 4-0 feeling is a distant memory. That’s what happens when a team loses nine straight games.

Member when media members were saying everything has to go right for the Canucks to compete for a playoff spot this year?

Thirteen games into the season, everything is not going right.

Hansen is injured. Anton Rodin hasn’t played a game yet. Chris Tanev is out. Jake Virtanen is a healthy scratch and needs a wake up call.

This is what Willie’s working with.

Vancouver gave a decent effort against the Islanders but rolling out Chaput-Gaunce-Skille as a forward line, it’s hard to say they had much chance to win.

The Canucks lost 4-2 in a game where they held a slight edge in even strength shot attempts: 54-52.

Those corsi numbers don’t tell the story, though. As is Vancouver’s way, they pressed once they were down in the third, propping up the totals. New York also blocked 23 of their shots, which speaks more about the Vancouver’s low-quality shots than New York’s great blockers.

Stuff did happen, though, so don’t stop reading yet.

If nothing else, this Canucks team is supposed to play well defensively.

They are supposed to have good structure and play sound positional hockey.

But they weren’t on New York’s first goal.

Larsen and Edler are the two men back here. I’d say they were the “two men on defence” but they clearly weren’t playing defence.

What were they doing? Talking about the coolest places to go in New York? Making a bet on Tuesday’s U.S. election? Exchanging banana bread recipes? Who knows.

Thought that was bad? Check out Gudbranson and Tryamkin on this one. They’re the two sliding on the ice while the puck carrier skates around – Guddy first, then Tryamkin, who takes out Sutter for good measure.

Notice that Gaunce didn’t do much helping out as he came back to help out.

Now, to counter the depressing tone this SixPack is taking on, I present this egregious penalty by Thomas Hickey knocking over Jack Skille.

Wait, can we get a close up?

Skille was given a penalty for unsportsmanlike conduct (AKA diving) but as far as dives go, this would get zeros across the board.

Let’s give him the benefit of the doubt and say he lost his balance on the crappy ice in Brooklyn.

On this starved-for-offence Canucks team, the one constant all season, the lone bright spot has been Bo Horvat’s dynamic play.

Horvat made the play that led to Granlund’s goal in the second period (he takes the initial shot here):

Not only did this goal pull Vancouver even at 2-2, it was scored on the power play – something that’s been nearly impossible for the team this season.

Later in the second period, Horvat nearly scored a goal of his own after creating a turnover and racing in with the puck.

The reward for being Vancouver’s best forward to start the season?

Horvat played 3:44 in the first period – the lowest ice time of any player on either team, tied with his teammate Chaput – a guy you’ve never heard of.

Then, with the game on the line in the third, this:

With the Canucks needing a win, and with Willie on the hot seat, Horvat played 14 minutes in the game. Brandon Sutter – the one who would’ve pushed Vancouver into the playoffs last year had he been healthy, according to Willie – played 19 minutes.

I have no words. A thinking face emoji would be perfect right about now.

With Loui Eriksson reunited with the twins, Daniel stole a puck at the blueline and scored for the second game in a row.

What you don’t see in this gif is moments before Daniel’s steal, Eriksson fumbled a Sedin pass.

I’m sure fans will be happy it led to the goal, but the fact is it was just another misplay by Eriksson with the twins.

Near the end of the second period, Eriksson nearly finally scored that elusive goal.

Guess it wasn’t meant to be.

Eriksson and the Sedins were Vancouver’s best forward line in terms of shots attempts, but I’d say that was mostly because of the Sedins and because they get the most offensive zone starts on the team.

With Hansen out, the one player who would’ve made sense with them was Alex Burrows. Elevated to a second line role because of injuries, he didn’t look at all out of place.

I’ve said it before – they need someone to forecheck, create turnovers and go to the net. Eriksson pretty much does only the third part.

This weekend, I wrote an article about how the Canucks are not doing a great job on their rebuild.

To me, developing a young core under the Sedins is possible, but the current management group hasn’t done a great job of it.

In his article, Spector did a great job of addressing those who constantly say Vancouver wouldn’t support a rebuilding team.

Vancouver, they say, is a unique market. A place where folks have so many other things to do than buck up for a non-contending hockey team. They ski, they hike, they run the seawall at Stanley Park.

Personally? I think it’s a load of crap.

The Vancouver fan base I have come to know over these many years is every bit as passionate as any across the country — and in some ways more so, rallying around their geographic displacement from the “Centre of the Universe” in Toronto, or the NHL’s traditional hockey headquarters in New York, Toronto and Montreal.

But give them this Canucks lineup, and tell them their Canucks are a playoff team, and they won’t be fooled. They’re not dumb. They can see that the Sedins, at age 36, are still their best forwards, 17 years after they were drafted.

5. Were the Canucks better then?

One sentiment we’ve heard a lot from the current regime is they inherited a “mess” from Mike Gillis and his management team.

Now, 11 games into their third season, with the Canucks on a nine-game losing streak, they’re making those ridiculous 65-point season predictions look optimistic.

@omarcanuck i’d take the “mess” over this any day honestly

Yes. Kesler, Juice, Garrison… these guys all had value (albeit not as high as during prime years). Benning has replaced them with duds. https://t.co/6X0PT7cQsB

Don’t forget what they promised for this season.

Maybe he uses the same adjectives to describe filling out his tax return?

6. What to do with the Sedins?

With the Canucks going 4-8-1 to start the year, this team isn’t looking any closer to becoming a contender than they were three years ago.

That’s debatable, because you can’t deny they do have some high-end young prospects in the system such as Brock Boeser, Olli Juolevi, and Thatcher Demko.

What’s less debatable is that Vancouver will likely not become a contender in the remaining two seasons of the Sedins’ contracts (including this one).

So I asked Twitter the question that will only get louder as this debacle of a season continues.

If the Sedins can’t win a Cup with the #Canucks, would you want to see them traded to a contender so they can?

The question came up because of what Henrik said to ESPN’s Pierre LeBrun in an article posted on Monday.

“But, moving forward, it’s not only up to us, if teams want to do something, they can force you out. But we’re going to do our best to stay competitive and that’s our only thought process.”

Given how they’ve seen teammates forced out in the past couple of years – Jason Garrison, Chris Higgins, Brandon Prust – you can understand why they’d worry.

It’s important to note that in the article they both reiterate that Vancouver’s where they want to be.

When they talked to Swedish reporter Jonatan Lindquist two summers ago, they used stronger words.

Lindquist said if it’s the Sedins’ choice, they prefer to stay in Van til end of cont, but if #Canucks want to move them, they’d be willing

Now, for the final word:

@omarcanuck on the one hand, yes, absolutely. on the other hand, i don’t trust benning with that deal.

Anyway, enough of this heavy stuff. Let’s end on a happy thought:

Just for fun can AV coach the Canucks tomorrow night?

And, to sign off, a wave that’s worse than the one seen nightly at Rogers Arena…

Note: Thanks to Ryan Biech for his help with some of the gifs in this post.