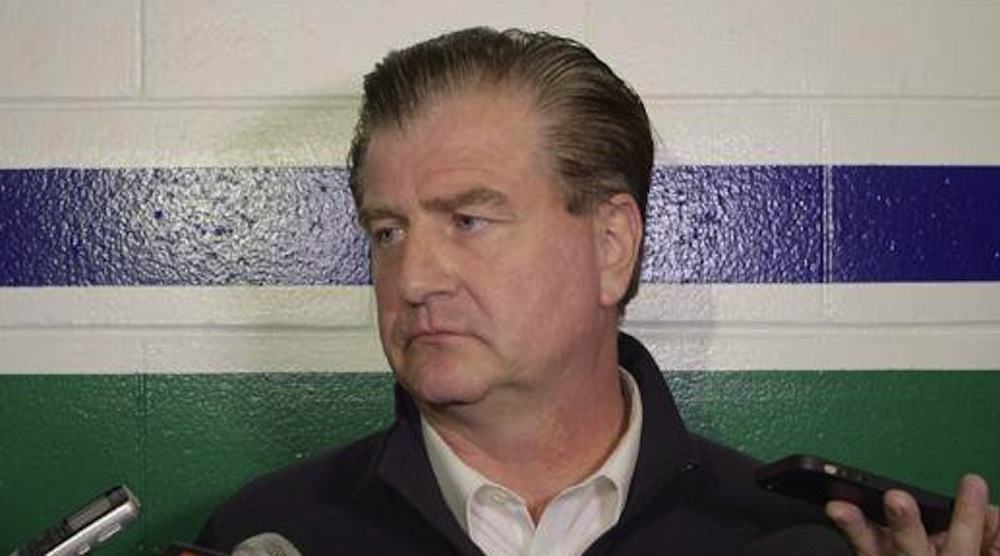 This is according to Sportsnet’s Dimitri Filipovic, one of the stats experts produced by the Canucks Army Blog. The team’s goals, scoring chances, and shots have them battling with the worst offensive teams in the past eight seasons.

Of course, if you’ve watched their games this season, this news is as obvious as saying US politics are a gong show. Vancouver’s been shut out in four of their past six games. Their list of dynamic forwards who create quality scoring chances is this long: Bo Horvat, Jannik Hansen.

If you’re an optimistic fan, you may be telling yourself this type of losing is normal for a rebuilding team.

No argument there – it is.

“What I’m trying to do is transition young players to be the next core group of the team,” Jim Benning told TSN 1040 on Friday.

While you can’t argue with his end goal, the issue is the long and meandering route he and Trevor Linden are taking the team on to get there.

The path back to being good team or even half-decent is not rocket science. When he was hired two years ago, Benning set out to draft and develop a young crop of players, while maintaining a “winning environment”.

The forwards would develop and grow behind the Sedins, and eventually replace them.

The defencemen would be mentored by Alex Edler, Chris Tanev and Dan Hamhuis, while he was here.

Done right, the process to restock the cupboard with promising prospects should take two to three years.

And though Trevor Linden and Benning are loathe to use the word “rebuild,” at every town hall and major press conference along the way, they’ve told fans the goal is to develop a younger core – one that fans can get excited about and attach to as they did in the early 2000s with Markus Naslund and Todd Bertuzzi emerging.

The key being it had to be done right.

One critical piece to rebuilding swiftly is to draft as many players as possible – to not only retain your own team’s picks, but to make trades to stockpile even more. Play the probabilities – because not every pick makes it to the dance.

The Maple Leafs – who beat Vancouver 6-3 on Saturday – have done a masterful job of it. In the past two years, they signed players such as Shawn Matthias, Nick Spaling, and Daniel Winnik to short term contracts, and when they knew they weren’t making the playoffs, they were proactive in trading them for draft picks.

The Leafs are already ahead of Vancouver in the present, and their future looks brighter too. In the past two seasons, Toronto has made 20 draft selections. Each team is only given seven picks per season.

Despite those no-trade clauses, the Canucks could have been proactive in asking Vrbata and Hamhuis about waiving them months in advance of last year’s trade deadline. Instead, as they did with Shawn Matthias a year earlier, they let the contracts expire, receiving no assets in return for quality players.

Worse, the Linden-Benning regime has traded seven draft picks to other teams without receiving picks in return for them.

“You get a big, strong guy, it’s hard to develop skill. Guys that do have skill, you can develop them physically. They can get stronger. That’s how I look at it.”

Vancouver’s recent draft selections are evidence they have a vastly different approach.

This season, in order to make his team more competitive, Vancouver would like to add another scorer. Benning spoke with TSN 1040 about making a trade on Friday

“If anything makes sense, we’re going to look into trying to do it,” he said.

“We’re not going to sacrifice any of our young players to make the team better now … I’m not going to be moving the Boesers or the Demkos or the Juolevis.”

That statement will make fans feel better, but here’s a quick reminder: last season, the Canucks had two promising young players getting ready to fill that Sedin scoring gap in a few years – winger Hunter Shinkaruk and centre Jared McCann.

Speaking on the radio less than a year ago – on January 18, 2016 – Benning talked about what teams wanted in return for a top-four defenceman.

“We’re just not at that point yet where we can afford to move one of our good young players so we’re not going to look at anything like that.”

A few months later, Vancouver looked at something exactly like that, trading Shinkaruk – their most promising forward in the AHL – for Markus Granlund, a bottom six, two-way centre.

And during the summer, they traded McCann – a potential number one centre – for Erik Gudbranson, a solid, stay-at-home defenceman.

Another major move Vancouver made was their signing of Loui Eriksson to a six-year $6-million contract. This was done to replace the departing Radim Vrbata.

Vrbata, who scored 31 goals in his first year in Vancouver, scored only 13 goals in year two. His shots went in at a 6.5 percent rate last season, while his career average is just under 10 percent in his prior years. The lowered shooting percentage would suggest a season of bad bounces, meaning he’d likely get back to his regular shooting prowess.

This summer, the Coyotes (another savvy rebuilding team) signed him to a one-year $1-million contract – a low-risk, educated gamble. Vrbata’s already scored four times this season.

Meanwhile, with Eriksson coming off a 30-goal season, he was looking for a home-run contract that could carry him to retirement.

Vancouver gave it to him, and no one thinks it’ll look good a couple years down the road.

There are some bright spots. The defence – Canucks rookies Troy Stecher and Nikita Tryamkin, and prospect Olli Juolevi in Junior – have potential.

With that depth coming, they could look to trade an older but proven defenceman such as Chris Tanev of Alex Edler, either for a high-end draft pick or a true offensive prospect.

That would be a savvy move to push the Canucks to supplement the young core that, aside from Brock Boeser, lacks scoring ability.

All this in mind, given the current regime’s track record, do you trust them to make this happen?