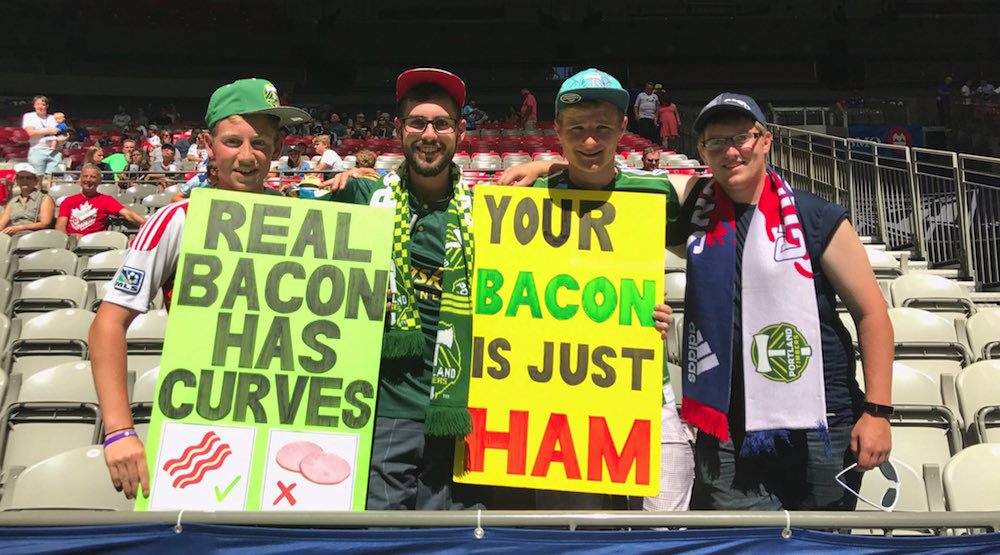 The singing, the chanting, the drums, the flags, the signs. It really adds to the overall enjoyment for everyone in attendance, hardcore and casual fans alike.

Timbers Army, the supporters group of the Vancouver Whitecaps’ rival in Portland, are one of the best.

They always arrive in Vancouver in big numbers to cheer on their team. They’re great fans.

…except during the national anthem.

Year after year, they look like buffoons, yelling during the singing of O Canada.

As Vancouver’s Marie Hui sang the anthem in front of a sold out crowd on Sunday at BC Place before the Whitecaps-Timbers match, the Portlanders were up to their old tricks.

During every break in the song, the hoppy beer hipsters shout “eh”.

Here’s the video evidence (it’s a bit difficult to hear, although you wouldn’t be saying that if you were sitting in their section):

It’s also not the first time they’ve done it.

They seem obsessed with the fact that Canadians say “eh.” Like many Americans, they haven’t got a clue when or how to use it.

Here’s a video of those Voodoo Donut dummies yelling “eh” a bunch of times at a Timbers home game in 2013:

Soccer fans are not choir boys, as evidenced by Whitecaps supporters yelling “you fat bastard!” at opposing keepers during every goal kick.

But during the anthem? Knock it off, you’re embarrassing yourselves.

As unimaginative as the Timbers Army’s dig at Canadians is, it’s still an attempt to poke fun at Canada during our anthem.

Want to make fun of Canada at any other time before, during, or after the match? Go ahead. Make fun of our bacon? Super lame, but sure, that’s fair game.

Poking fun at Canada during the singing of O Canada shows a lack of class. Do whatever you want during your own anthem, but show some respect for ours.

Can you imagine the reaction if a bunch of Canadians started yelling during the Star Spangled Banner?

Don’t think that would go over so well.

We DO respect tremendously & we sing both anthems. We do shout "eh" in the breaks. Consider it our version of "You Fat Bastard" or something

Some people have defended Timbers Army online by saying that they sing along to O Canada. Like that matters? Go ahead and sing, but you don’t get to add your own lyrics.

Come to the match, make as much noise as you’d like, but shut your American pie holes during Canada’s national anthem.