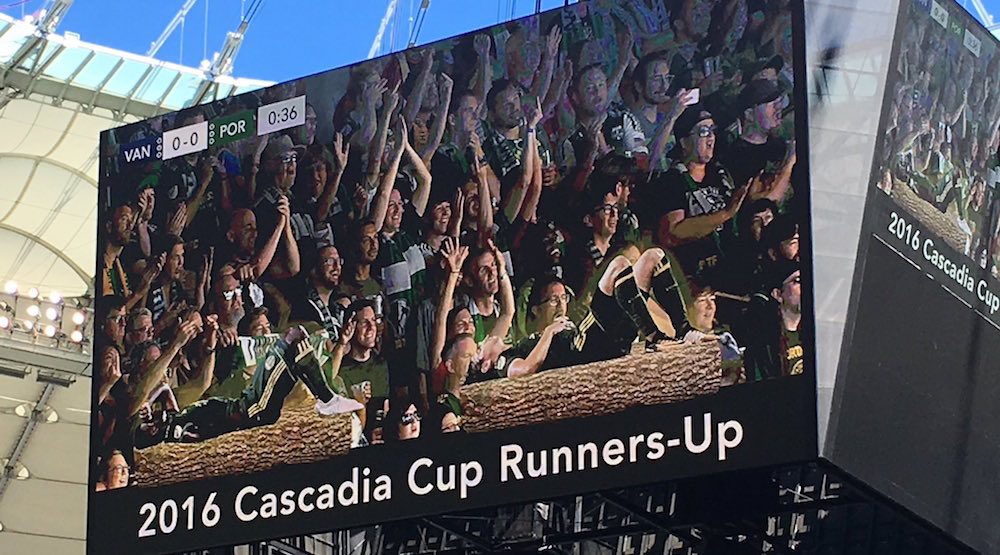 Coming into Sunday’s match, Whitecaps supporters had a lot to feel good about.

Winners of two in a row, Vancouver had climbed up the Western Conference standings, with games in hand. The Whitecaps were ready to feast on their rivals from Portland, and lay a whooping on an undermanned Timbers side.

Here’s how they welcomed Timbers Army, the traveling supporters group from Portland:

It was good natured trolling, to be sure. But perhaps it upset the soccer gods.

Not long after, in the 14th minute, Portland’s Jeremy Ebobisse scored the opening goal. Portland was the better team throughout most of the match, winning 2-1.

Timbers Army got the last laugh, as they’re looking pretty good for the 2017 Cascadia Cup:

Parker gets a goal stolen from him again

You have to feel for Vancouver Whitecaps defender Tim Parker. He’s been so solid in the back over the course of his Major League Soccer career yet has struggled mightily to find the back of the net.

Thankfully, it’s not like defenders have to score. It’s just nice when they do. It’s also tragic when they have what look to be sure goals snapped from their grasp.

With the Whitecaps trailing 1-0 late in the first half, the home team struggled to find any consistent attacking rhythm. Then a set piece just before halftime gave Vancouver hope.

Parker does so well to get a head to that ball. If he had scored there, not a single person would fault him. Unfortunately for him, midfielder-turned-defender Andrew Jacobson just happens to be in the area and makes absolutely certain the ball is going to cross the line.

To be clear, it’s not a bad goal. When you’re down by one at home, you make every effort to secure a goal, especially right before halftime. It’s also a legit goal, unlike the one Fredy Montero was credited with earlier in the year.

“I’m still fighting to get on that field every day in training,” Nerwinski said. “Sheanon [Williams] is a great player and he’s a good person to look up to too. He’s been helping me out. It’s still a fight every day to get on the field. So I’m not comfortable in my spot at all and that’s what Robbo wants. He wants me to fight and to bring out the best in each other.”

…but nobody else is

Nerwinski and Parker aside, that was abysmal from the ‘Caps. You’re never going to get an easier setup for a match than to face a rival at home in front of a boisterous packed house when said rival was forced to call up lower-league reinforcements just to make an incomplete game-day roster.

As seen in the Echo page.

Look at all those missing players! No, seriously, look and observe where some Portland positions are now missing key depth or, in the case of strikers, their starter in Fanendo Adi.

Now, ask yourself: is the correct gameplan A) to sleepwalk through 90 minutes and expect a result, or; B) to grab the weakened prey by the neck and shake them like ragdolls?

The answer, of course is B. Somebody should’ve told the Whitecaps. Instead, we got something along the lines of this little recreation in GIF form:

“Look! Tifo! And the Cascadia Cup! This is going to great.”

Thank you, thank you. I’ll be running a one-man show in my nightmares as I scream into my scarf in embarrassed rage.

Well, at least there was some passion after the game.

The exchange between Robinson and Caleb Porter after the game was intense. Robinson not talking about in post game. #VWFC

Would’ve been nice to see that kind of fire from an actual dressed player instead.