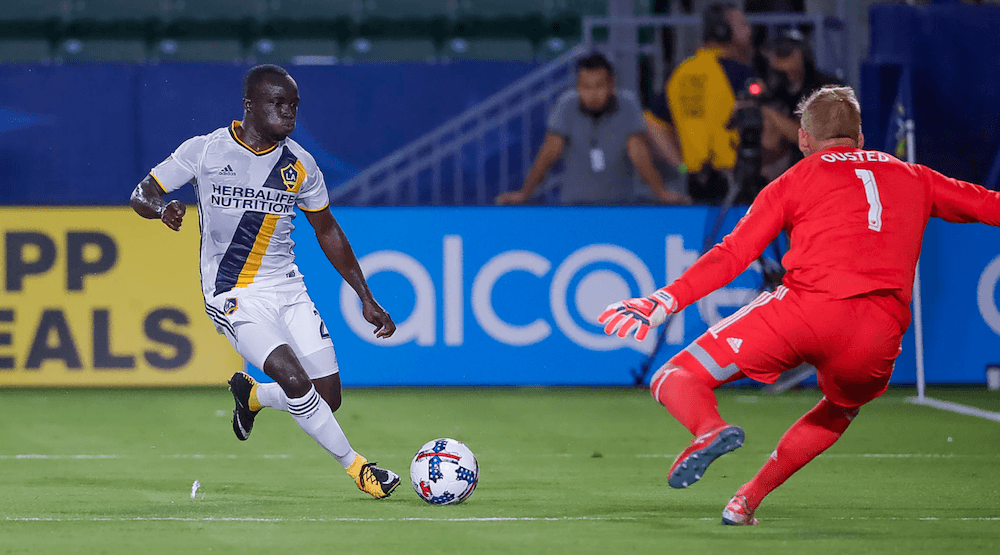 Vancouver Whitecaps goalkeeper David Ousted has a knack for spectacular, timely saves. Wednesday night on the road in Los Angeles was no different, as the Great Dane added another entry to his already bulging personal highlight reel.

With the score 0-0 in the 51st minute, a cross came to the far post and the LA Galaxy’s David Romney stepped up a ladder to connect on a venomous header destined to find the bottom corner of Ousted’s goal.

However, the Danish keeper used every inch of his 6-foot-4 frame to dive low and paw the ball out the basement.

The save was not only spectacular, it was absolutely key to keeping his team level.

That set the stage for midfielder Tony Tchani, who opened the scoring for the Whitecaps, heading in a set piece from Christian Bolaños at the 64th minute.

Carl Robinson’s pupils remained tactically disciplined through the rest of the match, making it impossible for LA to find a crack in their defensive armour and earning the ‘Caps a valuable 1-0 away win.

In the absence of Kendall Waston, who was recalled to reinforce the Costa Rican national team in the knockout stage of the Gold Cup, Carl Robinson was forced to pick a different player to wear the captain’s armband.

One would think that established veterans like David Ousted or Jordan Harvey were the obvious, logical choices. However, the Welsh Tactician rewarded 24-year-old Hicksville, New York native Tim Parker to lead his team.

Just as I predicted before the season started, the Whitecaps see Parker as a player who can be the anchor of their defence for years to come. With leadership as a valuable tool in his belt, this is likely the first of many times for Parker to don the captain’s armband for the Whitecaps.

Those balls to the box, tho…

The ‘Caps had a positive first half. Sure, they did not dominate possession but, when they had the ball they were able to transition into counterattacks with speed, exhibiting the Galaxy’s defensive liabilities.

Yet time and time again, the Whitecaps attacking corps relied on sending balls over the top from wide areas into the heart of the box. And, just as many times, the Galaxy’s central defenders easily cleared away any attempts before Fredy Montero was able to put a shot on target.

I guess that’s what happens when you have two towers defending in the middle of the box.

The Whitecaps looked most dangerous when they kept the ball on the ground and the wide players cut inside with the ball at their feet instead of servicing the box in the air.

Yes, I know that the Whitecaps opened the scoreboard with a header by Tony Tchani from a set piece. The point still stands, though.

Take them and run

The Blue and White played an efficient game in California and will return to Vancouver with a bag full of points from a stadium that has been historically unkind to them.

One could argue that the LA Galaxy are uncharacteristically rubbish right now and that in their last home outing they were hammered 6-2 by Real Salt Lake while the Whitecaps were only able to come away with a 1-0 victory.

To those people I say, a win is a win, they all count the same. Just enjoy it for a change.

Extremely happy with the three points tonight. Great win for the team now we focus on Sunday and the Timbers #VWFC #greatwin

The Whitecaps will return to BC Place this Sunday as they host Cascadia rivals, Portland Timbers in a crucial Western Conference fixture.