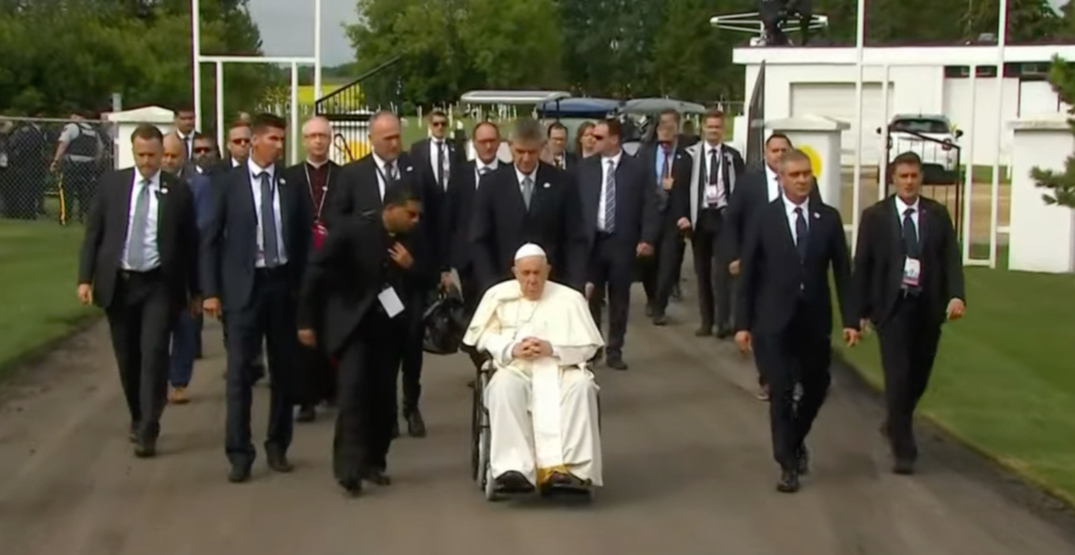 Pope Francis issued an apology to Indigenous peoples regarding the church’s role in residential schools as the pontiff travelled to Maskwacis, Alberta, Monday morning.

The historic apology comes after the Pope visited the site of the former Ermineskin Residential School south of Edmonton and met with survivors and community members.

Speaking in Spanish, Pope Francis addressed the crowd saying, “I have come to your native lands to tell you in person of my sorrow, to implore god’s forgiveness, healing, and reconciliation. To express my closeness and to pray with you, and for you.”

Pope Francis also mentioned he was given two pairs of moccasins during a delegation visit to Rome earlier this year as a sign of the suffering children endured in residential schools and was asked to return the moccasins upon his visit to Alberta, which he vowed to do.

“These are lands that speak to us. They enable us to remember brothers and sisters, you have lived on these lands for thousands of years. You have treated it as a gift of the creator, in this way you learned to foster a sense of family and community,” said Pope Francis.

He also said remembering the traumas of residential schools is necessary, and that they were devastating to Indigenous peoples.

“Through the system of residential schools your languages and cultures were suppressed, children suffered verbal and physical abuse and how they were taken away from your homes at a young age,” Pope Francis said.

“I am deeply sorry. I am sorry, I ask forgiveness in particular in ways in which many members of the church cooperated in projects of cultural destruction and forced assimilation promoted by the governments of that time which culminated in the system of residential schools.”

The crowd erupted in a loud clap when the apology was read.

“The overall policies linked to residential schools were catastrophic. It was a disastrous error.”

Last year, hundreds of unmarked graves were discovered on the grounds of former residential schools in British Columbia, Saskatchewan, and Alberta.

Canada’s Truth and Reconciliation Commission has reported that more than 4,000 Indigenous children died either from neglect or abuse in residential schools, many of which were run by the Catholic Church.

Pope Francis’ trip marks the fourth papal visit to Canada in almost 40 years and comes after an April apology he delivered before Indigenous delegates for the Catholic Church’s role in the harm caused by residential schools.

During his six-day visit, the Pope will also visit Quebec and Nunavut.