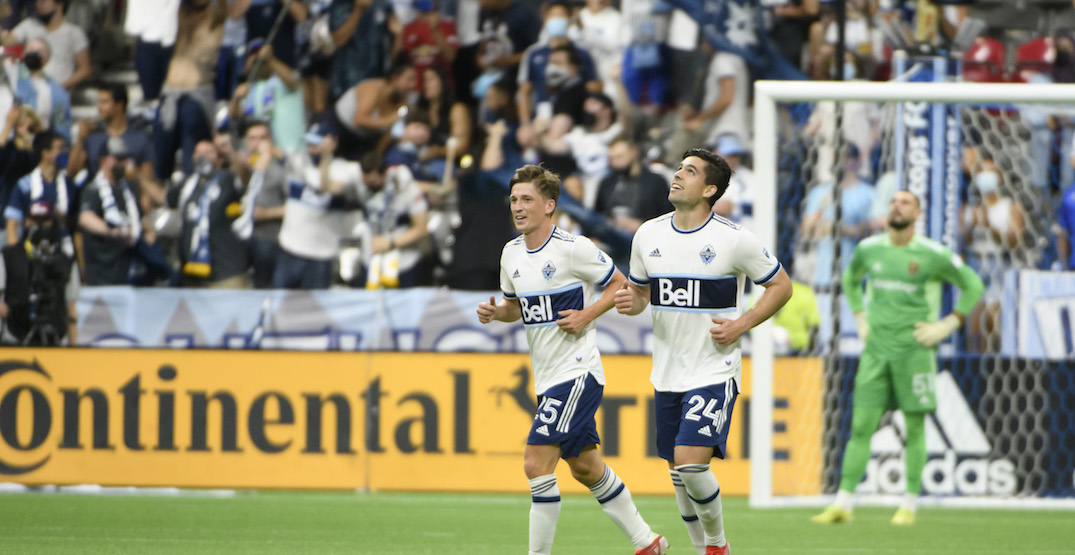 For a brief moment on Sunday night, the Vancouver Whitecaps sat above the MLS Western Conference playoff bar.

A win by the Portland Timbers less than an hour later dropped Vancouver to eighth place, but the fact that the Whitecaps are even in the playoff mix is a story in itself.

It wasn’t long ago that this Whitecaps season appeared to be a lost cause. Certainly, that’s the way it looked after a 4-0 loss to Real Salt Lake on July 7 — technically a “home” match for the Whitecaps, despite the fact that it took place at RSL’s home stadium in Utah.

Vancouver had just two wins and three draws in 12 matches to that point. They were still without a home, being forced to play all their games in the United States due to the closed border.

But now? Suddenly the playoffs are a realistic possibility. 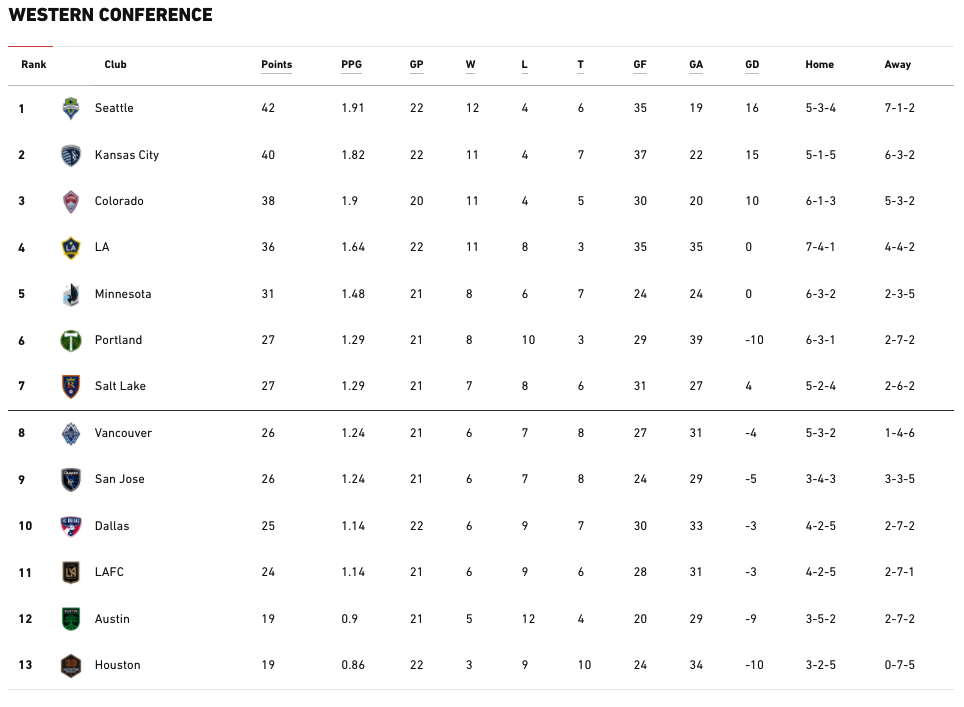 After stomping on Real Salt Lake on Sunday night, the Whitecaps won both of their first two matches back home at BC Place. Winners of their last three matches, the Whitecaps are also on a club-record unbeaten streak with four wins and five draws in their last nine matches.

They’re just one point behind Portland and Real Salt Lake in the playoff race, with 13 matches to go — and expansion Austin FC set to visit BC Place on Saturday.

“Our number one goal right now is to get above that line and qualify for playoffs at the end of the year,” said Whitecaps striker Brian White, who has goals in three straight MLS matches. “We know there’s a lot of games left to play and we’re focused on the next game.”

It hasn’t always been pretty. Vancouver’s unbeaten streak contained a one-month span without registering a victory, and an embarrassing loss to Pacific FC in the Canadian championships. That loss ultimately cost Marc Dos Santos his job, which is another bizarre part of this streak.

“The team has improved a lot. I want to say again that it’s improved a lot and also thank you to the former coaching staff that improved the team in a way that now is ready to play this battle,” said Whitecaps acting coach Vanni Startini after Sunday’s win.

“Of course, there was also huge investment with the new DP by the club. And the third thing that makes me excited for the club is that we play at home. Even tonight we’re feeling the fans chanting. Having the support of the city, it really makes a difference. You don’t have to forget that we played away for more than one year so playing here, it really makes a difference.”

While seeing the support of their home crowd has been genuinely heartwarming, the Whitecaps also need to find a way to attract more fans to BC Place. An announced crowd of just 7,503 fans witnessed Sunday’s match — well below the 13,000 capacity. Much of that may have to do with rising COVID-19 case counts in the province, but it has to be concerning nonetheless.

If there’s someone that can attract fans back to BC Place, it may be new designated player Ryan Gauld, because he’s been worth the price of admission so far.

The build-up from the lads 👌
The cross from Javain 👌
The header from Gauld 👌#VWFC #VANvRSL pic.twitter.com/TMNASbRgPu

Standing at just 5-foot-7 and weighing only 150 pounds, Gauld is putting the club on his back. The Scottish attacking midfielder has been a revelation since arriving in Vancouver, scoring again on Sunday, with two more goals following corner kicks off his foot.

Gauld now has two goals and two assists in his last three MLS matches, plus two more goals in the loss to Pacific FC, despite playing limited minutes as he gets up to speed since his arrival to North America.

It’s been four long years since the Whitecaps have made the playoffs and the club’s reputation has taken a beating since then. If Gauld can keep this up and lead the Whitecaps back to the playoffs, that will change the narrative surrounding this team — if it hasn’t changed already.

These are the moments we live for: celebrating huge dubs with you guys. 💙🌊#VWFC #VANvRSL | @bell pic.twitter.com/9dK59zJ4yK