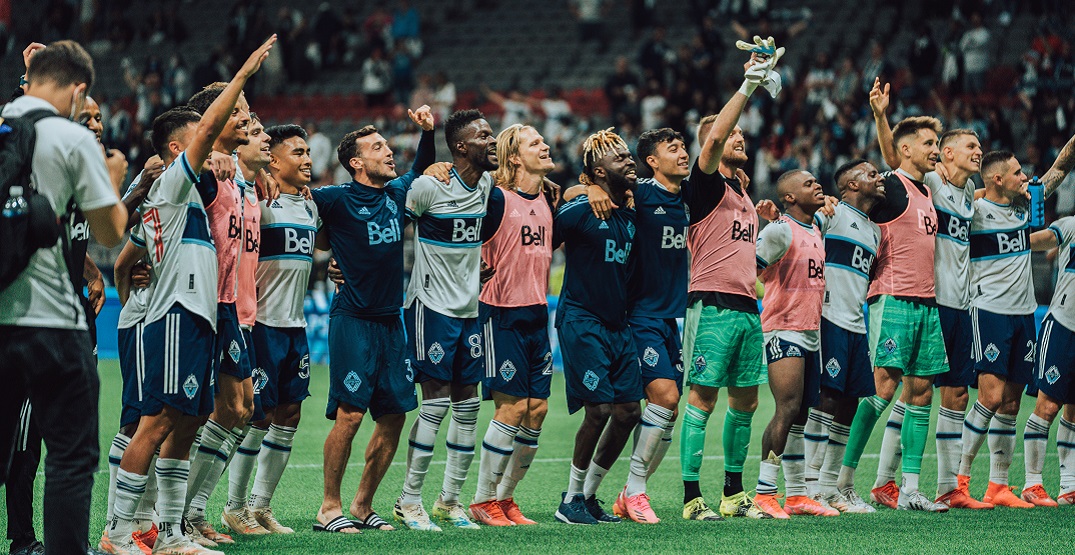 The Vancouver Whitecaps returned home on Saturday evening, with a 2-1 victory over fellow Western Conference opponent LAFC at BC Place in front of 11,114 supporters.

Falling behind 1-0 just before halftime, Vancouver stormed back with second half markers from Brian White and Ryan Gauld, who scored the winner in the 89th minute.

Ryan Gauld gets a late one to give Vancouver the lead!! pic.twitter.com/jQt2TpbTc9

Gauld’s goal was his first in a Whitecaps uniform after signing as one of the team’s designated players in July on a three-and-a-half year deal.

It was the team’s first win in front of fans at BC Place since September 14, 2019: a 2-1 victory over the Houston Dynamo. Vancouver also won a pair of matches at home last season against Montreal, but there was no crowd due to COVID-19 restrictions.

But the most memorable part of the evening might actually have been the team’s postgame celebration in front of their supporters on the stadium’s south side, as Whitecaps players and supporters alike joined in for a rendition of the Ben E. King classic “Stand By Me.”

Heartwarming stuff as Whitecaps players celebrate their first win in front of their supporters in 707 days by singing “Stand by me” together pic.twitter.com/FdDvCfMs8D

“What a feeling,” Gauld tweeted postgame. “The scenes at the end were unreal.”

The song choice was that of veteran Canadian forward Tosaint Ricketts.

“I think it’s great at the end of the match when everyone’s buzzing after a win,” midfielder Ryan Raposo said in the post-match press conference. “We get involved with the fans who’ve supported us through the 90 minutes and on. So, it’s definitely nice to sing along with them, for sure. Good vibes.”

“The fans, we need to win them back and this is what we want to do,” Dos Santos said. “The end of the game, what a connection between players, staff, and fans incredible. And great choice of song. Excellent choice of song.”