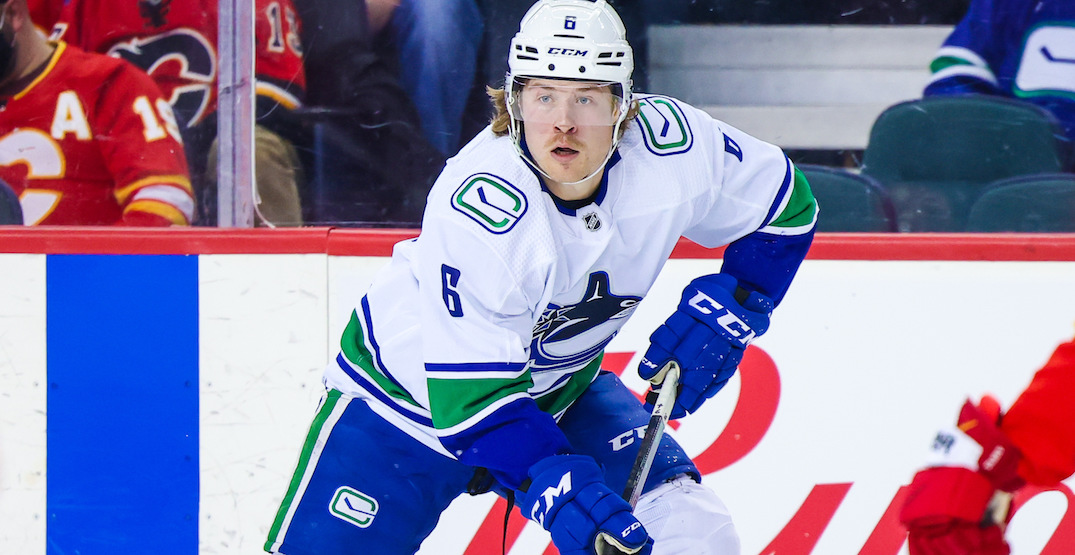 With a new management group in charge of the Vancouver Canucks, one thing is certain.

Much of what the Canucks do before the deadline will depend on how the team performs in the coming weeks.

That being said, there’s nothing to suggest that this management group sees the Canucks as a Stanley Cup contender, and rightly so.

Heck, even the playoffs are a long shot.

The Canucks have begun taking calls on their players, including some high-profile ones, according to Sportsnet’s Elliotte Friedman. Creating cap space appears to be a top priority for the team, and it appears everyone not named Elias Pettersson, Quinn Hughes, Thatcher Demko, or Bo Horvat could be in play.

If the Canucks are going to start swapping assets with an eye to the future, here are eight players with value that could be dealt before the March 21 trade deadline.

Recently, we laid out the argument for and against trading Miller.

If the Canucks do go down that road, they’ll be doing so because the 28-year-old should command a king’s ransom.

The Burnsville, Minnesota native has drastically underperformed at even-strength this season. However, his 2.05 points-per-60 over his first four NHL seasons signifies that this is a first-line player.

Don’t forget also that Boeser was arguably the Canucks’ best forward during a disappointing 2020-21 campaign.

The winger’s $7.5 million qualifying offer as an RFA isn’t ideal for the cap-strapped Canucks. That could push the Canucks to test the market for the young sniper.

Over the weekend, Friedman reported that the Canucks have been taking calls on Conor Garland.

According to @FriedgeHNIC, the #Canucks are getting calls from a number of teams about players. Mention Conor Garland might be on the market, while Elias Pettersson and Bo Horvat are not. pic.twitter.com/LNsDb4eQBK

Garland has been productive in the Canucks’ top six. That, coupled with the fact that he’s cost-controlled until 2026, could make Garland an attractive trade target for other teams.

Most Canuck players who are overvalued based on their contracts were left off this list. That included Jason Dickinson, Tyler Myers, Oliver Ekman-Larsson, Tucker Poolman, and Travis Hamonic.

While Tanner Pearson could slide into that category also, his productive season could put him back on the trade radar.

The 29-year-old is on pace for 36 points over a full 82 games. That’s decent production for the middle six winger.

Any trade involving Pearson could involve taking salary back, but perhaps the Canucks could find a player with less term than Pearson, who has two years left on his contract after this season at $3.25 million.

Although Nils Höglander’s production has dipped, he still provides surplus value on an entry-level contract.

However, that might entice another club to try and acquire him.

The 20-year-old Swede is a talented player, but currently he’s a non-factor on both the power play and the penalty kill. He also doesn’t seem to be a favourite of Bruce Boudreau.

Perhaps that could incentivize the Canucks to flip him for another young asset on the blue line.

There’s a case to be made that Tyler Motte was the Canucks most valuable forward in the month of January.

Not only was he driving a highly-effective checking line with Matthew Highmore and Juho Lammikko, but he was third among all Canucks with six points in 11 games.

Motte is a UFA who will command a raise during the offseason. If the Canucks aren’t willing to give him that raise, they need to extract something of value for him at the upcoming deadline.

As mentioned, most of the Canucks defencemen are being paid more than their worth, including Myers, Ekman-Larsson, Poolman and Hamonic.

One defender who doesn’t fall in that category is Luke Schenn.

Signed to be a depth pairing defenceman, Schenn has punched above his weight class all season long. His 2.17 expected goals against is lowest among all Canuck blueliners. He’s also tied for third among the team’s defencemen with eight points with Ekman-Larsson despite playing 13 fewer games.

Based on his looming $1.5 million bonus, there’s an incentive to trade Jaroslav Halak.

The veteran netminder will earn $1.25 million in bonuses once he plays two more games. He’s also on pace for a $250,000 bonus if he maintains a save percentage above .905.

Halak has a no-move clause, but the Canucks would be wise to see if they can offload his contract before those bonuses kick in.