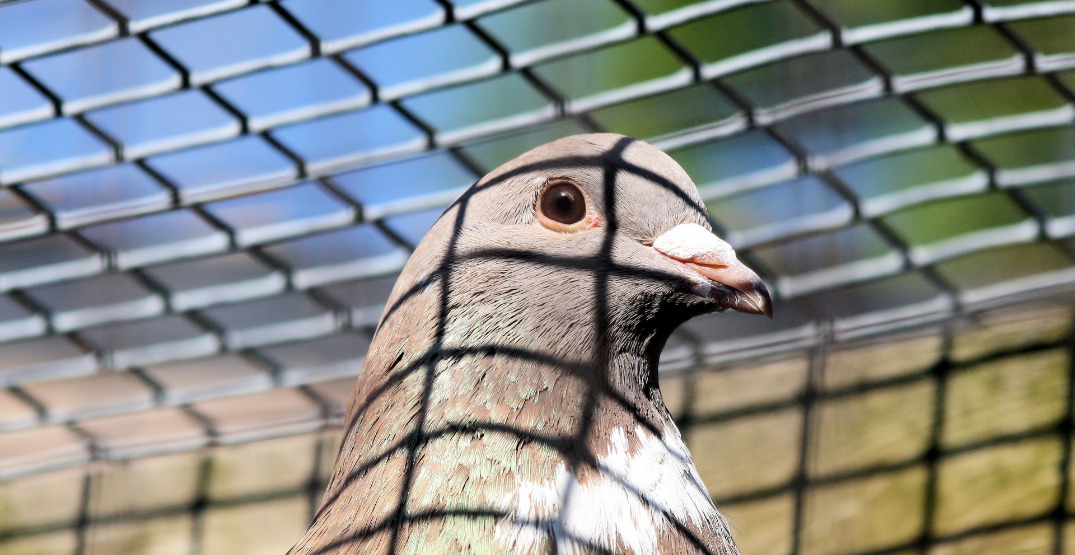 A pigeon in a cage (Renamarie/Shutterstock)

Pigeon traps that have been implemented at Metro Vancouver SkyTrain stations have outraged some members of the public.

If you ride the SkyTrain in Metro Vancouver, you’ve likely seen a pigeon, or three, flying around, and it has become a problem for TransLink in numerous ways.

TransLink recently engaged in an initiative to lower the number of pigeons at stations by feeding them birth control. TransLink was very forthcoming and open about the initiative. There doesn’t seem to be any news or press release about the pigeon traps, which some suggest are inhumane.

As of Tuesday, over 1,700 people have signed a petition, which was created several months ago, calling on TransLink to do something about it.

“This world belongs to humans and animals, but we human beings have become so selfish, we want to vanish every living thing, which we think should not exist,” reads the petition creator.

“My heart aches after seeing something extremely disturbing and disgusting.”

A comment on the petition page adds, “this breaks my heart to hear how people are treating pigeons or any other animal inhumanely.”

Food and water before death

The BC SPCA told Daily Hive Urbanized that the traps TransLink uses are “live cage traps” that have food and water for the pigeons.

“The BC SPCA is aware of the legal pigeon trapping program but does not condone it and previously proposed a contraception option for long-term management.”

She went on to say that the contraception pilot program didn’t reduce pigeon numbers fast enough, adding that it could take over two years “for natural attrition of sterilized pigeons.”

TransLink returned to trapping after the pilot.

In a statement to Daily Hive Urbanized, TransLink said that “pigeon droppings in and around our system are a huge safety concern.”

Things like bacterial infections or diseases can spread from droppings.

“Additionally, wildlife like pigeons often trigger our track intrusion alarms, which result in emergency braking on the SkyTrain that can cause customer injuries and service delays.”

According to TransLink, 544 track intrusion alarms were triggered over the past year, resulting in approximately 18 hours of service lost.

“Pigeon trapping is a common industry practice and just one form of bird control used across the SkyTrain system. We work closely with a contractor to ensure this method is consistent with accepted legal procedures. The traps are monitored weekly, and birds inside the cages have access to food and clean water while inside the cages. The SPCA is aware of this practice and receives weekly updates from our contractor.”

TransLink uses other “pigeon mitigation methods,” including spiking and netting.

The SkyTrain operator will bring the OvoControl birth control program back this summer and replace traps at some stations.