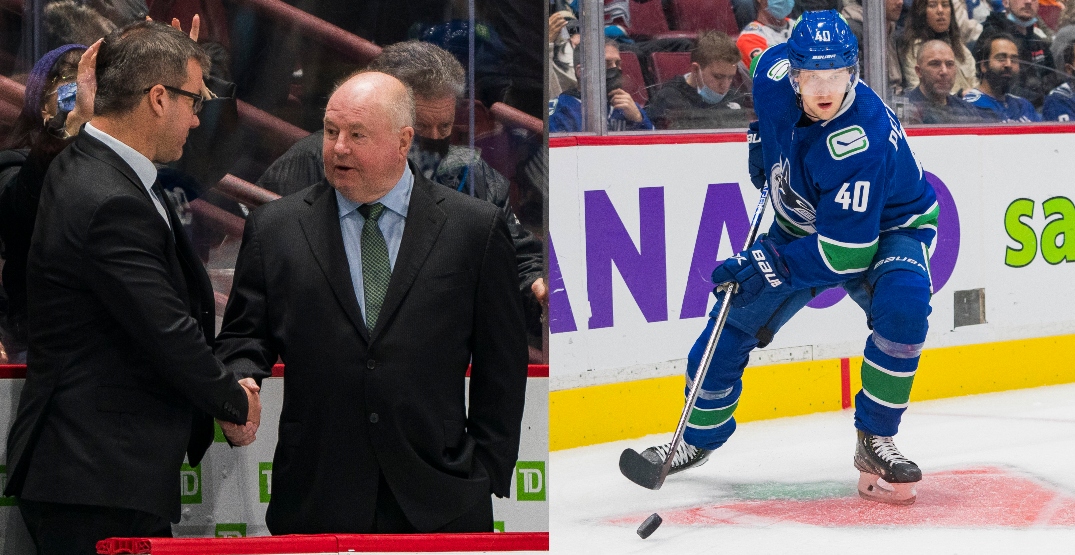 This is Bruce Boudreau’s world, and we’re just living in it.

The first day in charge couldn’t have gone any better for the new Vancouver Canucks head coach. Boudreau had his players smiling again at the morning skate, then showed off his charming personality with the media before the game.

That night, the Canucks beat the LA Kings 4-0, in the team’s first shutout of the season.

“Bruce there it is,” chants in Rogers Arena were loud enough to be heard on the television broadcast, and suddenly it felt like all the Canucks’ troubles were behind them.

Boudreau’s keeping things in perspective though.

“It’s pretty funny. Like if you lose the next game it could be ‘Bruce, there he goes.’ I pay as little attention to that as possible,” Boudreau said after Tuesday’s practice.

Indeed, Boudreau’s first game behind the Canucks bench won’t mean much if the team slips back into their old habits.

Vancouver’s PK isn’t just bad, it’s been inefficient on a historical level. When Travis Green was fired, the Canucks had a 64.6% penalty kill percentage, which was the worst in NHL history through 25 games of a season.

Boudreau seems quite willing to experiment with the team’s penalty kill, both in terms of strategy and deployment of players.

The veteran bench boss revealed that Elias Pettersson and Quinn Hughes each requested to play on the penalty kill — something they rarely got a chance to do under Green.

“They both asked me about penalty killing and I said, ‘Yeah, we’re gonna try you.’ We’re gonna try [Brock Boeser] at one point too. Let’s face it. It wasn’t working before, so I mean trying new guys is not going to hurt you.”

Pettersson was used on the PK Monday, receiving 39 seconds of shorthanded ice time. That’s not a lot, but still qualifies as the sixth-most shorthanded time on ice he’s had in 191 career games.

“I told him we are going to use him on the penalty kill. He played six seconds, which is nothing. The one penalty he was going to kill, Hamonic was the one that got the penalty. We wanted to keep the groups together, and that’s the only reason he didn’t get a chance.”

Given how poor their PK was before, Boudreau’s right, the only way to go is up. Bottom six forwards like Jason Dickinson and Juho Lammikko can’t claim to be penalty killing specialists if they’re a part of the worst penalty kill in NHL history. So why not try something different?

Pettersson is a smart player with good quickness and anticipation skills. There’s reason to believe he’ll be an effective penalty killer. While killing penalties will reduce his opportunity to produce offensively at even strength, it will also keep him involved in the game. The biggest drawback is the risk of injury, and certainly if he breaks a bone blocking a shot, Boudreau will be heavily criticized — just as John Tortorella once was when he played the Sedins when down a man.

But it’s not as if Pettersson will play heavy shorthanded minutes. Boudreau plans to cycle four forward pairs on the PK, with the goal for each to kill 30 seconds of each two-minute penalty.

If the Canucks are going to turn things around, they’ll need their penalty kill to be significantly better than it was under Nolan Baumgartner this season. Walker, who is in charge of the penalty kill under Boudreau, has players pressuring the puck more than Green’s more passive approach.

For one game, the Boudreau/Walker approach worked, as the Canucks killed off both Kings power plays. We’ll see if that continues in the days and weeks ahead.