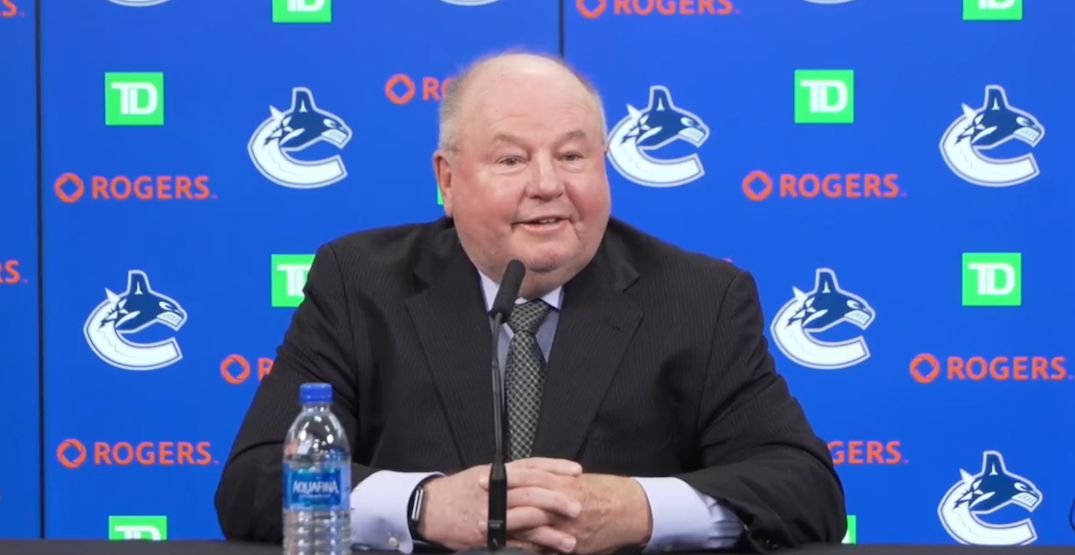 Bruce Boudreau’s first day at his new job couldn’t have gone much better.

The new Vancouver Canucks head coach started the day with his first morning skate at Rogers Arena and seemed to be a breath of fresh air for players.

“Bruce has a lot of positive energy,” Bo Horvat said after practice. “He wants to get the best out of his players. He has a few new ideas and ways that he thinks we can improve as a team. I’m excited to get that going here tonight.”

Boudreau spoke to a number of players one-on-one, including Brock Boeser, who he encouraged to shoot more. Boeser listened to him, snapping a 13-game goalless streak later that night.

The Canucks secured their first shutout of the season, winning 4-0. Two days after getting booed off the ice by fans calling for Jim Benning to be fired, Canucks fans gave the team a standing ovation and serenaded Boudreau with a clever “Bruce! There it is” chant in the third period.

In between his first Canucks practice and game, Boudreau spoke to the local media.

The veteran bench boss spoke about being excited to coach in Canada and articulated how he wanted the team to play a more aggressive style.

Boudreau being great for the media was never in doubt. He’s well known to be one of hockey’s great characters.

But of course, he’s also well known for dropping the occasional F-bomb. He once dropped 15 of them in one minute.

While Boudreau spoke eloquently throughout his media conference, cameras caught a subtle F-bomb at the end. After the last question had been answered and Boudreau got up from his chair, the 66-year-old let out an “oh, fuck.”

Hahaha oh my god, Bruce dropped an F bomb right as he got out of seat at the end of the presser. I LOVE THIS MAN. #Canucks pic.twitter.com/7rVONtyV9y

The live stream was still rolling, so fans heard it — and they loved it.

Canucks fans can’t get enough of Boudreau right now, and yes, that includes dropping some F-bombs.

Here’s what fans had to say:

If I needed any proof that I have the body of a 40 year old it was Brucr Boudreau getting out of a chair with a subtle f bomb, he just like me fr

The Stanley Cup is back on the table!

Well if I learned something today is that Bruce Boudreau and I share the same need to drop an F bomb everytime we get out of a chair.

Bruce Boudreau and JT Miller have instantly connected on one thing they believe in. #Canucks pic.twitter.com/rCfQCPaM3O