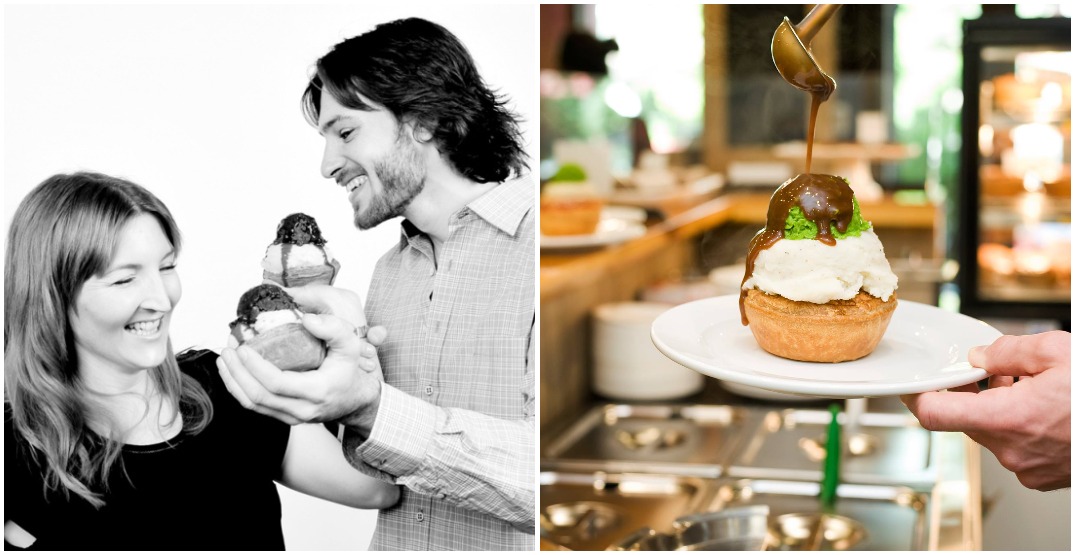 Anyone who spends any time in Whistler quickly notices all the Australian accents. Kerri Jones is one of the many Aussies who visited Whistler and then never left.

Jones told Daily Hive that she decided to move to Whistler in 2009 to experience “a Canadian winter in the mountains.” It was there that she met Alex Relf, a snowboarder who hailed from Victoria.

Although Jones had expected to miss her family and friends, she was surprised to discover how much she also missed the Aussie meat pie, which is considered a true staple food in her homeland. So Relf, “who loved creating in the kitchen,” baked one for her. According to Jones, “It was love at first bite.”

Vancity has been supporting people in our communities since 1946, like local restaurateurs. As part of our Made in Vancouver series spotlighting local businesses, we talked to Vancity member Kerri Jones about the delicious meat pies that she and her partner create and the struggles of running restaurants during the ongoing global pandemic.

In Whistler in 2013, Jones and Relf opened the first Peaked Pies location, to give Aussie expats “a taste of home.” Jones explained, “Peaked Pies was created as a place for those who love Aussie meat pies and warm comfort food to be able to come and dine, to reminisce about their childhood or their trip to Australia, or just to be introduced to a new concept.”

The eatery became so popular that the couple opened a second location, in Vancouver’s West End in 2016. That was followed by a third spot, in Burnaby Heights in June 2020.

So what, exactly, is this enticing comfort food, beloved by Aussies and New Zealanders alike? It’s a small pie that’s typically filled with diced or minced meat and gravy and usually eaten as a single-serving takeaway dish.

Jones told us that the most popular item on their menu is the Traditional Aussie: “Ground beef, onions and gravy in an all-butter crust. It’s what us Australians grew up on, so it brings back a lot of wonderful memories to everyone who has one.”

Other favourites include Steak and Mushroom, Chicken, Mushroom and Leek, Steak, and Bacon and Cheese. Popular with vegans is the Vegetable Medley, with its yams, leeks, corn, cauliflower and celery in a coconut milk sauce. The best way to order any one of these pies is topped with the “signature Peaked option of creamy mashed potato, mushy green peas and gravy.”

Although the pies are grab-and-go, there’s nothing rushed about the preparation that goes into each one. Jones described the process: “Our pies take two days to make. We make the dough using grass-fed butter, and our pie fillings are like giant stews which are made and left to marinate overnight. The following day, our team hand-press each individual pie shell, fill them and top them with a puff pastry lid, constantly baking throughout the day.” The pies are handmade using only the best ingredients: “AA Alberta steak, free-run chicken from the Fraser Valley and fresh vegetables.”

Each meat pie can be eaten in the restaurant, or ordered to go—hot and ready to eat—or purchased frozen for reheating later. When dining in, be sure to accompany your meat pie with an Australian-style espresso or one of the local craft beers on tap.

In addition to meat pies, sweet treats are also on the menu. Jones said, “Have a sweet tooth? We can hook you up with one of our handmade desserts, such as the Apple Crumble pie or an Australian Lamington: a square of vanilla sponge cake, dipped in chocolate then rolled in coconut.”

As is the case with so many restaurants, the COVID-19 pandemic has been a huge challenge. Jones described it as “the constant disruption to how you would normally operate a business.” She said, “It first started with the drop in revenue by up to 80%, instantly, with everyone told to stay home. The bills such as rent, utilities and loan repayments all had to be paid in full.”

She continued, “Then came the two-week isolation for any employees showing COVID symptoms. In the beginning, when testing was not happening, our staff would call that morning with a runny nose or sore throat, and they would have to stay home for two weeks. We had to close our Whistler store simply due to staff in isolation.”

And the pandemic-related struggles didn’t end there. Jones said, “Then came the restaurant restrictions, which seemed to be changing every few weeks in the beginning, and finally we were told zero dine-in during this most recent lockdown. It’s been such a rollercoaster of emotions, since you can’t really make a plan.”

Jones explained that restaurants run on such tight margins that most can’t survive on takeaway meals only, and Peaked Pies is no exception: “In order for us to be successful, we need full access to our dining rooms and people to be out and about, wanting to socialize.” She added, “The toll on all of our mental health has been overwhelming.”

Despite all of these ongoing challenges, Jones and Relf are soldiering on, determined to continue sharing their tasty creations with Australians yearning for a taste of home, British Columbians eager to try something new, and anyone else who could use a dose of comfort food right about now.

Peaked Pies is active on social media, so use @peakedpies and #peakedpies to tag them in posts. Jones and Relf love hearing from fellow fans of the Aussie meat pie and gathering suggestions for new flavours.

When asked why anyone should consider trying Peaked Pies, Jones responded enthusiastically: “There really is nothing like Peaked Pies in BC, even Canada. We are a pie-lover’s heaven! Once people try our pies for the first time, they get hooked.”

She added, “The whole premise behind Peaked Pies is because we love eating them, and hope you love them just as much as we do. Eating a Peaked Pie is like receiving a big warm hug!”

And who couldn’t use a big warm hug right now?