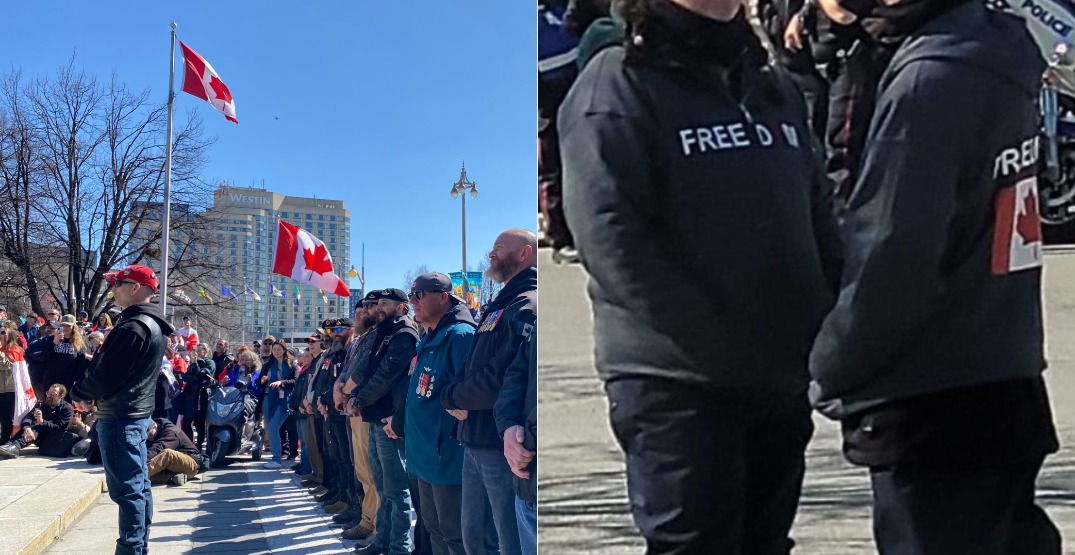 Police in Ottawa continue to manage demonstrations in the downtown core as protesters gathered across the city on Friday and Saturday for “Rolling Thunder Ottawa,” a motorcycle convoy protesting COVID-19 restrictions.

On April 30, police said they were seeing freedom supporters wearing protective gear, and reminded “everyone to remain lawful, respectful and follow police direction.” Their Hate Crime Unit was also in place to handle any arising issues.

We are seeing freedom supporters wearing protective gear. We are reminding everyone to remain lawful, respectful and follow police direction. #ottnews pic.twitter.com/671ig5iTDD

Several vehicles made their way around the city as well, including participants in the “Rolling Thunder” convoy.

A motorcycle rally is moving through Ottawa in a controlled route. Police are on scene to ensure public safety. Follow the directions of police. #otttraffic #ottawa #rollingthunderottawa

Around 9 am, police tweeted that “A motorcycle rally [was] moving through Ottawa in a controlled route.” Rolling Thunder demonstrators came through even though protest vehicles were already banned in the city’s downtown core.

Crowds impacted traffic, and drivers and pedestrians are urged to stay tuned to Ottawa Police’s twitter for updates.

With the events taking place downtown this weekend, there will be traffic and other impacts around the City: https://t.co/LNG3dg7byu
For the latest updates on traffic, follow @Ottawa_Traffic or visit our interactive traffic map: https://t.co/yQy1eYQxCC pic.twitter.com/gUXtOPBWHc

According to a police statement, the demonstration preparation began on Thursday night when officers began executing the Downtown Core Control Plan with resources from Ottawa Police, RCMP, OPP, York and Windsor Police.

They warned people on the morning of April 30, “If you attended the illegal protest in February 2022, were charged, and have conditions not to be in Ottawa, be advised that you must respect those conditions. If you breach your conditions, you will be arrested and charged.”

Later that day, they tweeted that people were arrested for breaching those conditions. There were also other arrests made, with details pending.

On Friday, seven people were arrested for various charges, including assaulting police. Police described the crowd that day as “aggressive and combative,” saying they sent Public Order Units in tactical gear to the Rideau/Sussex area to disperse people.

There were also some counter-protestors spotted on Saturday.

I love how ottawa stands up pic.twitter.com/bNlQ9DdPsh

A banner reading, “Ottawa says no to convoy hate,” was put up on the Laurier Bridge, according to a social media post.

More banners popping up downtown this time on the Laurier Bridge sending a clear message to “Rolling Thunder” participants that they are not welcome in #Ottawa.

We must and always will continue to build towards a more inclusive city, free of hate. pic.twitter.com/8TxDofrsc0

And strangely, someone on Twitter saw a group of people in mascot costumes hanging out in the streets.

Ottawa Police said while dealing with these demonstrations that “calls for service were responded to across the city.”

“Our plan remains focused on public safety, maintaining the right to participate in events and enforcing all applicable laws. We continue to monitor online and open-source commentary related to all events,” they said.

They posted about arrests they were making throughout the day on Twitter.

Suspect vehicle spotted on flatbed tow truck at the intersection of Laurier and Metcalfe today at 3:49 PM #Ottawa #ottnews pic.twitter.com/RwjPcvu9L4

Around 2:30 pm on April 30, Ottawa Bylaw and Regulatory Services tweeted an update saying they had issued 560 parking tickets, towed 39 vehicles, and issued 8 tickets for noise, smoking, and encumbering a highway since 7 am that day.

Enforcement action since 7 AM Friday in regard to the demonstrations in #OttCity:

Officers will continue taking a zero tolerance approach to violations of our municipal by-laws. pic.twitter.com/SIlJuEUI3B

“Officers will continue taking a zero tolerance approach to violations of our municipal by-laws,” the tweet said.

This isn’t the first convoy Ottawa’s seen this year, either.

In February, a “Freedom Convoy” occupied the nation’s capital for about three weeks.