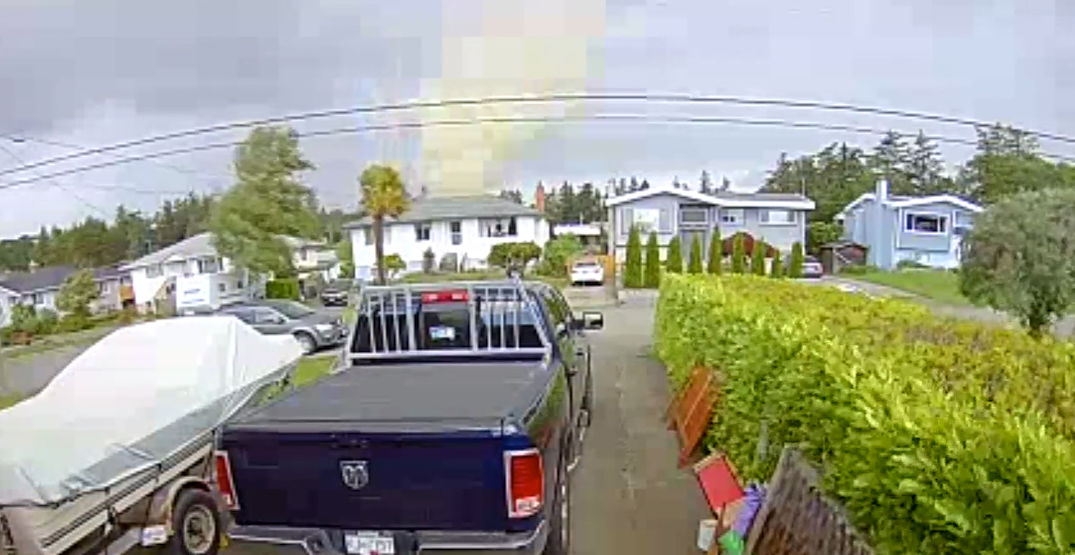 Tornado touching down in North Saanich on May 21, 2020. (Environment Canada)

A weak tornado touched down briefly on Thursday in southern Vancouver Island, in a neighbourhood in North Saanich in Greater Victoria.

The twister touched down shortly after 12 pm. There were no reports of injuries or damages to structures, although a video shared by Environment Canada appears to show a trampoline flying into the air.

Video shared by Environment Canada of a short-lived tornado in North Saanich in Greater Victoria. Someone will need to replace their trampoline. pic.twitter.com/iGgxqxIt2c

According to the federal meteorological agency, this was a EF0 tornado, which has winds ranging between 105 to 137 km/hr.

“The unsettled conditions under which this tornado and cells of heavy showers occurred will diminish late this afternoon,” reads a tweet by Environment Canada on Thursday.

We have received footage from North Saanich of what appears to be a weak, short-lived EF0 tornado at 12:18pm PDT. The unsettled conditions under which this tornado & cells of heavy showers occurred will diminish late this afternoon.
Please use #BCStorm to send reports.

Daily Hive reported a waterspout sighting near the airport in 2015, and an EF0 tornado may have touched down in the Fraser Valley in 2018.