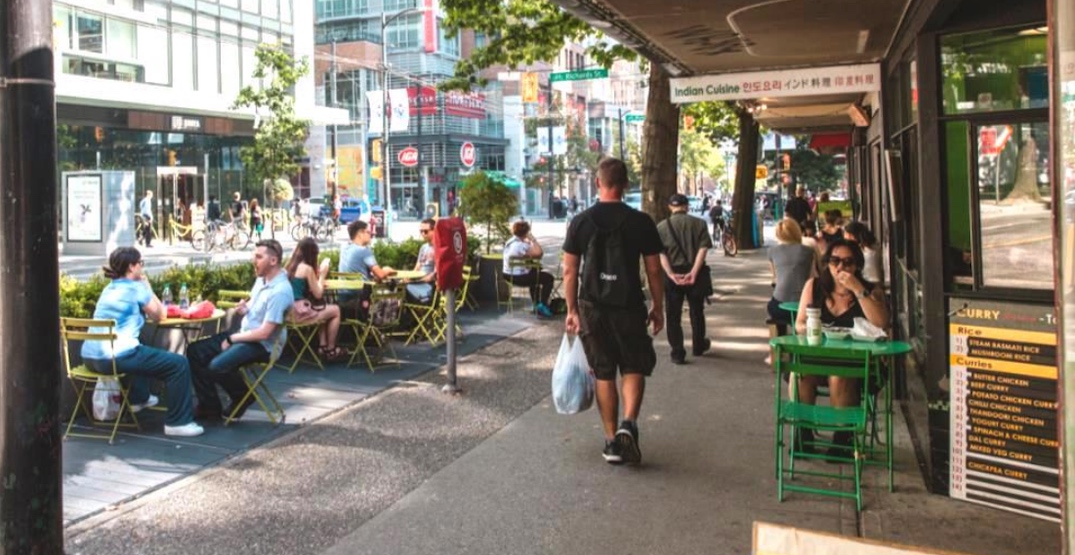 With the provincial government’s relaxation on some dine-in restrictions and the approach of summer, restaurants in Vancouver will see a new and expedited flexible process for establishing their own outdoor patios.

On Wednesday evening, in a unanimous vote, city council approved a motion by councillor Sarah Kirby-Yung that called for the city to urgently develop a new framework for patios that expand the seating capacity of restaurants.

When restaurants reopen, interior seating capacities will significantly decrease due to physical distancing, but there will be an opportunity for dining areas to spill outdoors onto sidewalks and streets.

But the framework for this is at least weeks away, and there will still be an application process.

During the meeting, city manager Sadhu Johnston explained some permitting is still needed to ensure fire safety and sidewalks remain accessible to the general public, particularly for wheelchair users.

“Obviously when you privatize public space, it’s really important that we make sure people can still get by,” said Johnston.

“Generally speaking, staff are very enthusiastic about expanding the opportunities for patios and recognize this could play a critical role in getting restaurants going.”

He said a streamlined application process would be created, with city staff turning around straightforward applications based on a simplified checklist within a day or two. For more complex patio proposals, city staff will work with the applicant to figure out how to make it acceptable.

But there were calls from Charles Gauthier, the president and CEO of the Downtown Vancouver Business Improvement Association, for the city to move faster.

“This is extremely important… we need to do everything possible to save our food and beverage sector,” said Gauthier, who suggested replacing any application with basic guidelines for restaurants to follow.

“We all understand that we have very short patio season, and I’m concerned we’re going to run up against time.”

But all of this is still heading towards the right direction, according to John Doty, the franchise owner of the Browns Socialhouse restaurant at the northeast corner of the intersection of West 10th Avenue and Alma Street on the border of West Point Grey.

He told council that “everyone unanimously amongst restaurant owners I speak to thinks this will go a long way to helping us get through this period.”

“It’s not a silver bullet, but it’d be a huge win to be able to have this kind of outdoor seating, patios, and parklets expedited.”

He emphasized even the incremental increase in revenue generated by outdoor seating in small and pocket areas will add up to sustainable levels over time.

“It’s already razor thin on the edge here, and it’s hard to foresee making it through a long period of physical distancing measures without the kind of effort that is being proposed today,” said Doty.

Kirby-Yung deemed these forthcoming patio measures as tangible actions the municipal government can perform, asserting that the flexibility and relatively faster process — compared to the existing permitting procedures — will make a difference to many small businesses.

“People don’t go into hospitality to make a lot of money, they go into it because it’s a passion,” she said. “It’s not an easy existence even in the best of times, and now with COVID-19 we have restaurants desperately trying to survive on take-out. And if they can’t do that, they’ve had to close.”

Councillor Lisa Dominato also noted that the restaurant sector has been one of the hardest hit industries by COVID-19, which employs many young individuals.

While these measures will help address some of the needs of restaurants, several councillors also expressed a desire to have city staff explore possible opportunities for common eating areas created by the municipal government with chairs, benches, and tables on public plazas or other public spaces. Such areas for the general public would be beyond the privately-created and operated restaurant patios, but they could also support different takeout or quick service restaurants and cafes.