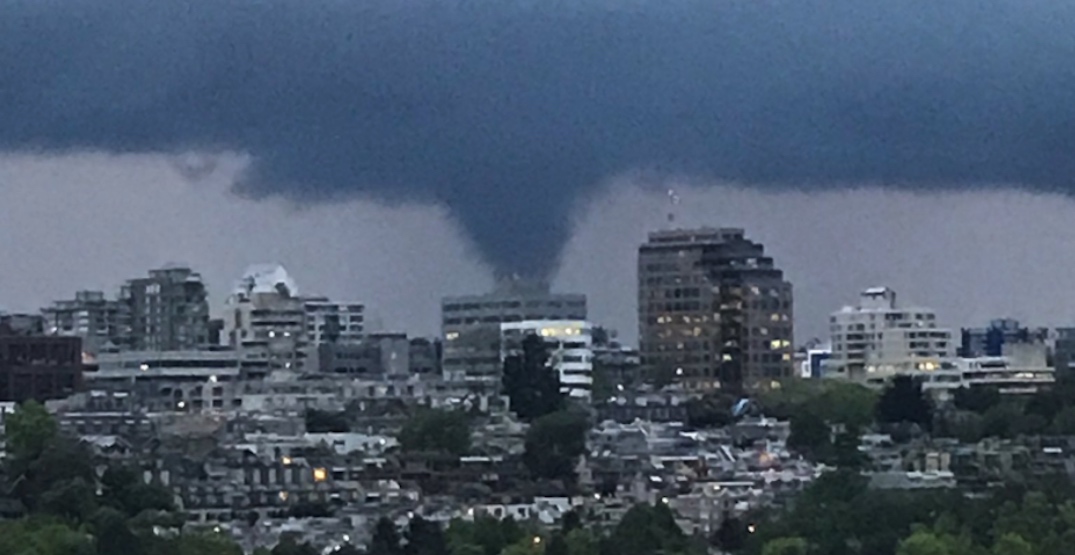 Funnel cloud spotted over Vancouver on May 12, 2020. (@leonard_tang/Twitter)

Tuesday evening’s stormy skies over Metro Vancouver may have produced a funnel cloud.

Photos and a video posted onto social media show a funnel cloud hovering over the Fraser River delta near Vancouver International Airport. The distinctive weather formation was also seen from a distance in the southern horizon from downtown Vancouver.

A thunderstorm cell was reported in the area, but according to The Weather Network meteorologist Tyler Hamilton it is a tossup over whether this was a supercell, which is commonly associated with producing potent tornadoes.

If you need another, here’s one from Marpole. pic.twitter.com/NaYJv0oeju

I was so stunned I took a brief video to prove it was actually over the Fraser. pic.twitter.com/TppdfKmIXt

But he says there is also a possibility this was a non-supercell funnel that formed from the movement of cold air in unstable conditions. Such funnels form higher in the atmosphere and have a weaker rotation and updraft than a typical tornado formed by a cumulonimbus cloud or supercell.

Daily Hive reported a waterspout sighting near the airport in 2015, and an EF0 tornado may have touched down in the Fraser Valley in 2018.

Hanging in there #YVR pic.twitter.com/FwUnjmNGT3

That was a good show. pic.twitter.com/5SuaJkoM6u