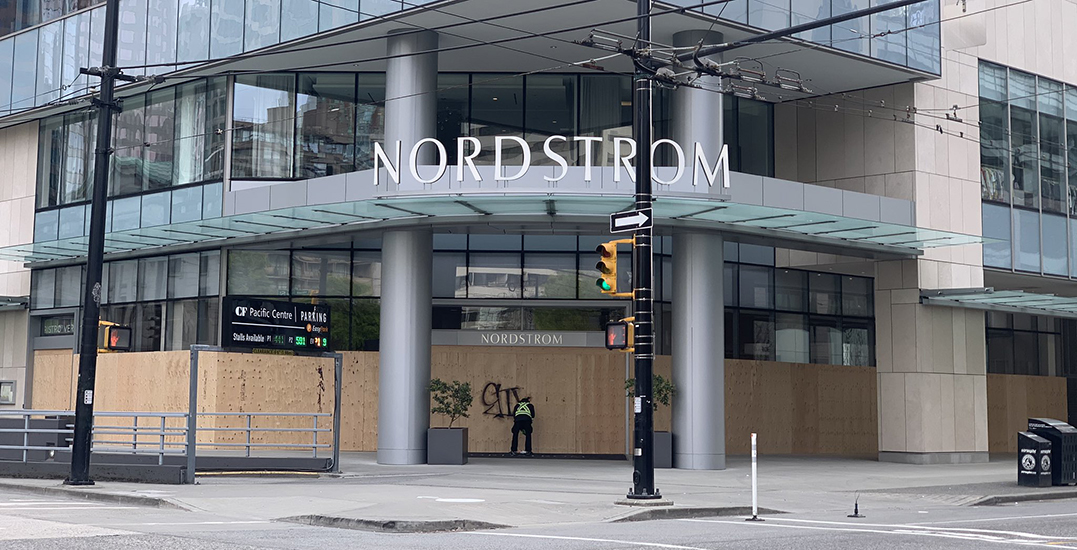 The exterior of Nordstrom being boarded up in mid-April due to the COVID-19 pandemic. (Karm Sumal/Twitter)

Less than two weeks after re-opening to the public, Nordstrom’s Pacific Centre location in downtown Vancouver has undergone another temporary closure.

Photos have surfaced on social media showing the outside of the luxury department store being boarded up, with security guards standing near the entrance.

A representative from Nordstrom tells Daily Hive that the company is “paying close attention to gatherings that may take place in cities across Canada and the US this week.”

Over the past seven days, people all across the world have marched and protested over the death of George Floyd. The 46-year-old Black man was killed by a police officer in Minneapolis on Monday, May 25.

Some protests against the injustice turned violent, however, as police clashed with demonstrators and stores and local businesses were vandalized and looted.

“To help keep our employees and customers safe, we are adjusting hours and temporarily closing stores in some locations,” reads a statement from the company. “Out of an abundance of caution, some of our storefronts are being boarded.”

Having only taken down this 10-12 feet of plywood just last week, it’s going up again. Looks like @Nordstrom Vancouver isn’t taking any chances. 6 security guards standing near the entrances too. pic.twitter.com/K0PWp5LI35

Last Sunday, thousands of participants gathered outside of the Vancouver Art Gallery for a protest demanding justice after Floyd’s death. The mass gathering remained peaceful and another protest is scheduled to take place on Friday afternoon at Canada Place.

Nordstrom Pacific Centre reopened to the public on May 22 after a lengthy closure prompted by health concerns over the COVID-19 pandemic.