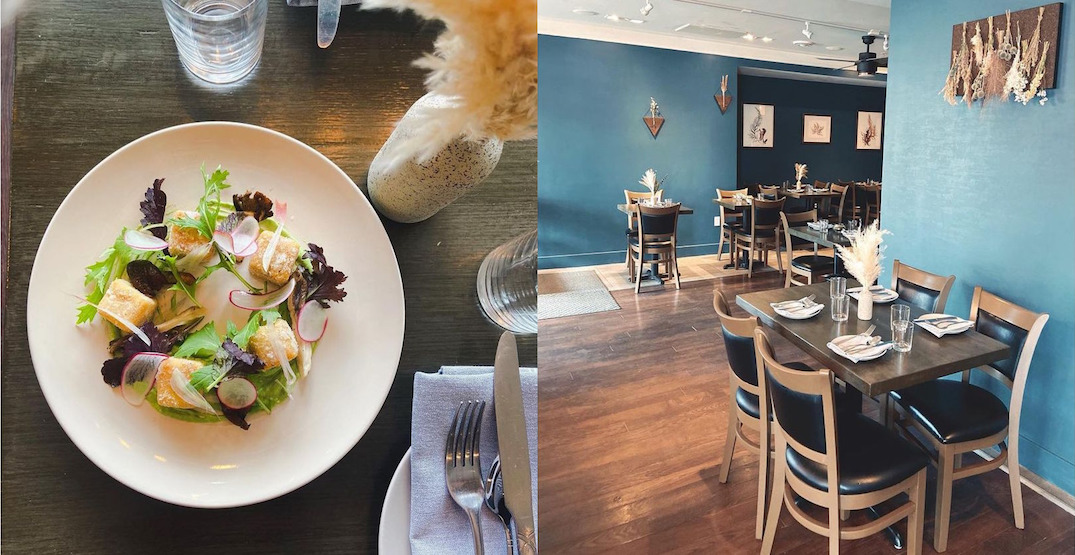 A new veggie-focused restaurant has recently opened in Vancouver, and it’s got a lot of people talking about more than just its fresh, inventive eats.

The family-style items and fresh tasting menu comes to us from chef-owner Colin Uyeda and pastry chef-owner Pricilla Deo.

Folke also stands out from other Vancouver restaurants because of its hospitality-included pricing model – this means you don’t need to leave a tip after your meal here because staff are already compensated through their wage.

Other restaurants have also been switching to this business model, suggesting that there is a much-needed tidal wave of change hitting the hospitality industry. With staff shortages across the board and increasing food and rental costs, a switch to more stable salaries for restaurant workers may be the first step.

Dished spoke with Folke about their decision to eliminate tipping and offer better support to its staff.

Since it’s a fairly new concept for a lot of people, customers don’t always necessarily know about the policy before visiting the restaurant.

“Most customers who come in are unaware of it and love that we are doing it,” co-owner Pricilla Deo tells us.

“A few have even mentioned to us to make it more prominent on our website and menu, as they feel it would draw people in and be even more of an incentive to dine with us at Folke.”

As for others in the industry, so far those who have come to Folk agree that it is a fantastic idea and “something that they also feel strongly about.”

One misconception, though, is that since tipping is out, customers tend to assume that the missing cost has now been built into menu prices instead.

“There are a few customers who don’t understand and make assumptions. We have customers think our prices are higher because we factor in gratuity into our pricing, which we do not do,” Deo clarifies.

She says that, since the cost of everything has increased recently, menu pricing reflects this inflation, if anything.

The restaurant also operates with a share plate style, so each dish is meant to be split among two or three people.

“We have also received some backlash as to what we are paying our staff,” Deo says. “Most people think that we are paying an hourly rate and therefore on slower days, our staff do not make as much money if there aren’t any tips. We actually pay everyone a fair salary with full benefits.”

Because some days are busier, while others are slower, this is balanced out by offering a salary instead of a tip-based income.

“We adopted this pay model because it provided our staff stability and took away the notion that they would need tips to support their income. They get paid a competitive salary that takes the cost of living into account and therefore tips are not necessary to supplement their incomes,” Deo explained.

The other misconception associated with getting rid of tipping is that, since servers aren’t working for tips, the service will then become “sub par.” This, Deo says, is simply not the case.

“The incentive to work hard isn’t [getting] tips, it is being part of a professional team that is here because they believe in the restaurant and their values align with ours.”

Everyone on staff, both front of house and back of house, are paid the same salary across the board, which is meant to promote a healthy work environment and foster a sense of camaraderie and teamwork.

Deo also notes that starting out with this pay structure as a new restaurant is completely different than an existing restaurant switching to a hospitality-included structure.

“We realize our pay model and our pricing structure isn’t for everyone and isn’t suitable for every business. We weren’t doing it to try and change the industry,” Deo says.

“It was something that was really important to us and we did it for our restaurant because it works for us.”