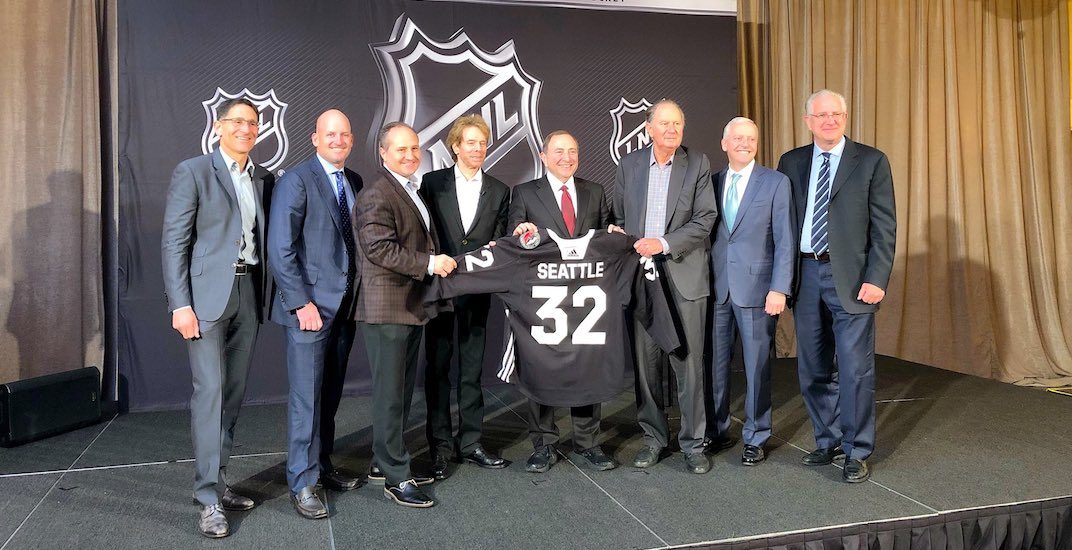 Welcome to the NHL, Seattle.

The NHL Board of Governors voted unanimously in favour of awarding Seattle the league’s 32nd franchise on Tuesday.

“Seattle, the NHL is thrilled to welcome to you,” said commissioner Gary Bettman, who made the announcement at league meetings being held in Sea Island, Georgia.

The NHL has granted an expansion franchise to Seattle.

The League’s 32nd franchise, which will begin play in 2021-22, was approved in a unanimous vote by the Board of Governors during a meeting today.

The Emerald City has checked every box the NHL could ever want since their city council approved a new $700 million arena project last year. They officially applied for a team three days later.

The prospective ownership group began selling refundable season ticket deposits of $500 to $1,000 each on March 1. The NHL wanted to see them sell at least 10,000 of them, which they sold in 12 minutes. After an hour, they had sold 25,000. They eventually capped deposits at 32,000, and now have a waiting list.

Bettman confirmed that the expansion fee will be $650 million, up from the $500 million price tag the Vegas Golden Knights paid when they entered the league.

“Today is an exciting and historic day for our League as we expand to one of North America’s most innovative, beautiful and fastest-growing cities,” Bettman said. “We are delighted to add David Bonderman, Tod Leiweke and the entire NHL Seattle group to the National Hockey League family.”

Seattle will begin play in the 2021-22 season, instead of 2020 as originally planned, to ensure arena renovations are completed in time. KeyArena will be gutted, essentially resulting in a brand new stadium at Seattle Center, in the shadows of the Space Needle.

“We will keep the historic roof, and everything else will be new,” Leiweke said, adding that construction begins tomorrow. “We believe it will be one of the finest arenas in the world.”

The new team will play in the Pacific Division, the same division as their new rival, the Vancouver Canucks. The Arizona Coyotes will move to the Central Division, meaning that all four league divisions will balance with eight teams each.

The Seattle franchise will begin play in the Pacific Division of the Western Conference and the @ArizonaCoyotes will realign to the Central Division. https://t.co/gYSiUWAreM #NHLSeattle pic.twitter.com/bT9myflZLF

“A team in Seattle evens the number of teams in our two conferences, brings our geographic footprint into greater equilibrium, and creates instant new rivalries out west, particularly between Seattle and Vancouver,” Bettman said.

Canucks owner Francesco Aquilini has been in full support of a new team in Seattle from the get go. With just 230 kilometres separating the two cities, Seattle will ease the Canucks’ brutal travel schedule and create the first natural geographic rivalry in franchise history.

An expansion draft will take place in June 2021, Bettman said, under the same rules that favoured the Vegas Golden Knights’ entry into the league. Seattle will take a player from every NHL team, except from Vegas, who will be exempt from the process.

Seattle has a lot going for it, including some semblance of a hockey culture as a longtime home to multiple WHL franchises in the area. Their city has even won a Stanley Cup, as the Seattle Metropolitans became the first American team to capture it in 1917.

The new team’s name has not yet been decided.

With a metro population of approximately 3.8 million people, Seattle was the largest city in the United States without both an NHL and an NBA team since the Sonics left for Oklahoma City in 2008. A fast-growing city that’s thriving economically, they’re the frontrunner to get the next NBA team up for grabs too.