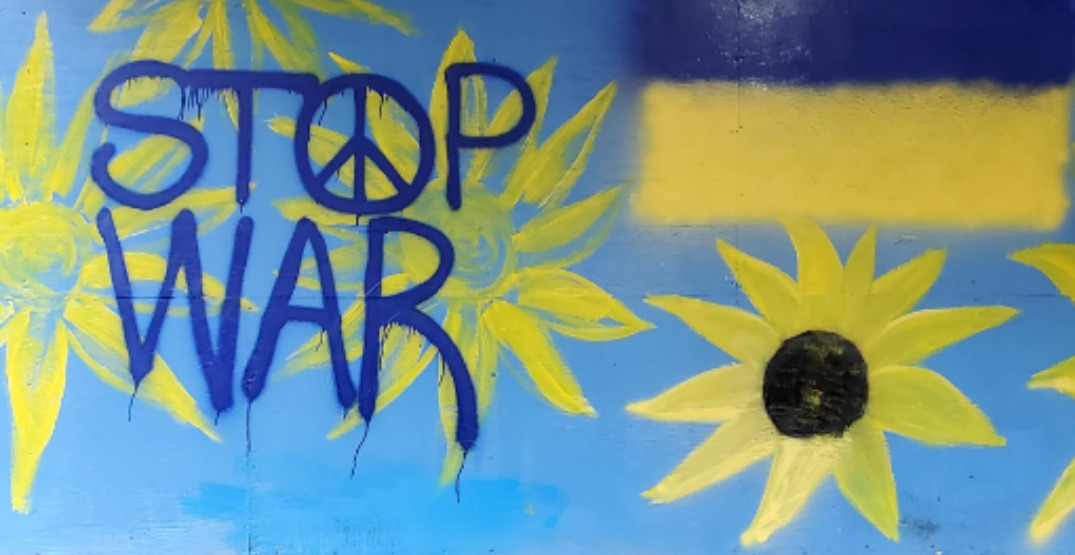 A mural supporting Ukraine’s resistance to the Russian invasion has now been repainted after it was defaced on March 19 in Burnaby.

JJ Malcolm, the artist behind the original mural, showed up at the site as soon as possible to start repairing his work.

He covered up the “Down with the Ukraine’s Nazis” spray paint and created something entirely new.

“I felt like the vandalism was both an attack on my freedom of expression and a hurtful act against the Ukrainian and Jewish people,” Malcolm told Daily Hive.

“The only right thing to do in the situation was for me to recreate the mural and continue showing signs of support for Ukraine. I will not let hate overcome love. Art is the strongest weapon against war.”

He painted sunflowers, the national flower of Ukraine, along with the Ukrainian flag and the words, “Stop war.”

“I decided to go with STOP WAR because it is a uniting slogan for many peoples, not just for the situation in Ukraine,” said Malcolm.

Martin Kendell, a Burnaby resident who spotted the defacement early on and tweeted his disapproval, says the mural got “a lot of positive feedback” from the community before being damaged.

He said it was “disgusting that someone would deface this mural,” but was very glad to see it repainted.

This is beyond infuriating. Some asshole vandalized the #StandWithUkraine️ mural on Wilson Avenue in #Burnaby. pic.twitter.com/AapSo8FzKF

“I went there last night to keep [Malcolm] company while he painted, and you could feel the appreciation in the community as person after person praised it as they walked by,” said Kendell in a message to Daily Hive Vancouver.

“But most of all, you could see how happy JJ was to get the chance to do something bigger and better and closer to the vision he originally had.”

In honour of the repainting of the #StandWithUkraine mural, I went down Wilson Avenue from Kingsway to Central Boulevard and picked up:

Malcolm adds he was thrilled to receive widespread support from his neighbours in Burnaby.

“I wouldn’t have been able to get supplies, being a low-income person if it wasn’t for the generosity of Burnaby,” he said.
“I feel relieved and elated that the mural is redone. I feel like real solidarity is coming to the forefront. We are all in this together.”

In an email to Daily Hive Vancouver, Burnaby RCMP said its officers arrived on scene as soon as they could, but Malcolm beat them to it.

“Burnaby RCMP officers arrived on scene [in the] afternoon and spoke with the original mural artist, who was on scene covering up the graffiti,” Mounties said.