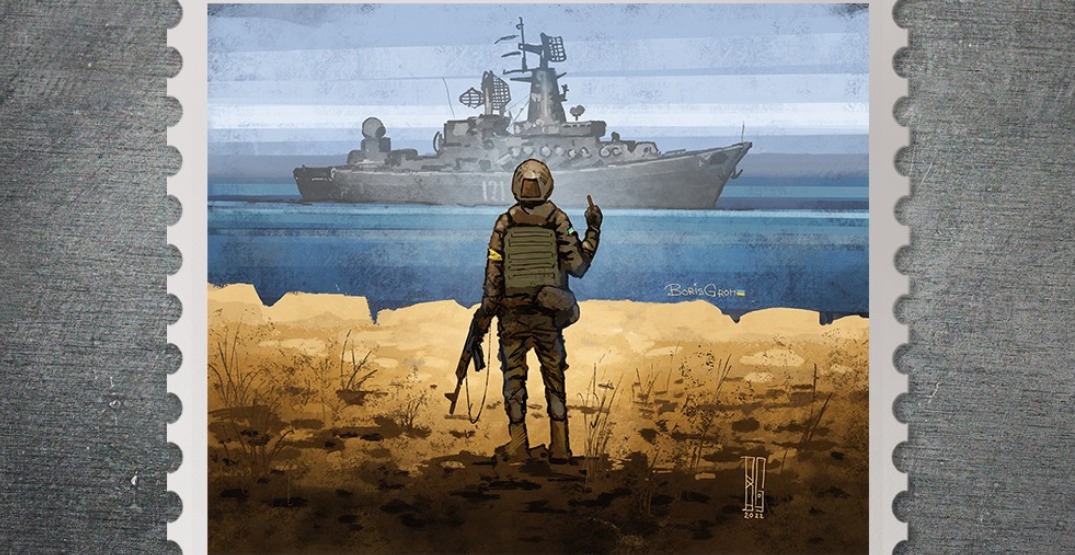 They just unveiled the illustration for the stamp, which is actually really beautiful. The design by Boris Groh was voted the winner in a competition held by the Ukrainian postal service.

And, the winner is….

Here is the first place design from the «Русский военный корабль, иди на#уй!» design contest has been announced. Ukrposhta will begin printing for a release later this month…

It shows a Ukrainian border guard fully geared up, flipping off a Russian warship.

With one hand, he’s giving the enemy the finger, and with the other, he’s holding his gun.

During the announcement, Ukraine’s first deputy foreign minister, Emine Dzheppar, said it commemorated the Snake Island incident. During a conflict between Ukrainian border guards and Russian attackers, the guards were asked to surrender.

This was a modern Russian (project 22160, #368) patrol ship ‘Vasyl Bykov’ which participated in attack on the Snake Island earlier in February. pic.twitter.com/dLbamHa47D

Those were their final words before they were attacked, but at least they were really cool.

Releasing the stamp now, as Ukraine defends itself from the Russian invasion, makes sense. The rallying cry has made a comeback, and the stamp is meant to be encouraging for people who are continuing to fight for their rights through the struggle.

Look what #Russian occupants have done to our beautiful #Mariupol. They keep bombing the besieged city. #Mariupol has already become a symbol of resistance. Glory to the Heroes who defend it from Russian invaders! God bless them and all civilians who stay there.#StandWithUkraine pic.twitter.com/Khe8zoeYwH

The civilian death toll there passed 2,000 on the second day of March, and Russians continue to attack relentlessly.

Hopefully, a little laugh from a project like this offers people there some joy.