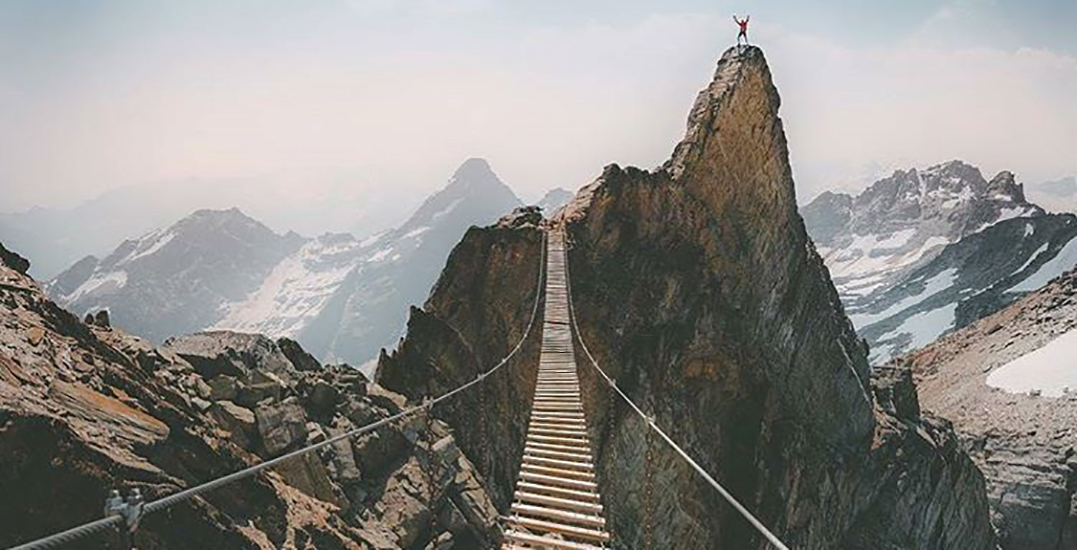 If you thought that North Vancouver’s Capilano Suspension Bridge was tall, well, you haven’t seen anything yet.

Perfect for the adventurer looking to conquer British Columbia, or perhaps just those with no fear of heights whatsoever, the suspension bridge leading to Mt. Nimbus is easily worth a spot on your bucket list.

The suspension bridge is part of the access route leading to the peak of Mount Nimbus called a via ferrata. Italian for “iron way,” a via ferrata consists of a course of iron ladders, rungs, and bridges that sees climbers tiptoe their way across canyons and scale up the sides of mountains.

Unlike traditional rock climbing, which involves climbing-specific shoes, ropes, and harnesses, a via ferrata is much more user-friendly.

No mountaineering experience is required, although it is recommended that adventurers are in adequate physical shape.

⛰ Would you? This is what it’s like to cross the Mt. Nimbus via ferrata suspension bridge at 600 metres (1970 feet) in the sky! 📷: @cmh_heli 📍: Bobbie Burns Lodge, @hellobc #cmhheli #ExploreBC #ExploreCanada pic.twitter.com/fSS1lNloog

The route was built in 2007 by Canadian Mountain Holiday (CMH) guides and is part of an exclusive excursion available only to guests of CMH’s Bobbie Burns Lodge.

In order to reach it, guests start at the remote Bobby Burns Lodge, which can be found near the city of Golden, BC. A helicopter then picks up guests and drops the riders throughout a valley.

After being dropped off, the newly-turned mountaineers clip their harness to the steel harness of the via ferrata and begin the climb.

The ideal time for making the climb is during late summer when snow has completely melted and the weather is optimal for climbing.

Not to mention, the clear blue skies will give a view like no other.

Interested in making the climb yourself? You’ll have to save up, as a trip up to Mount Nimbus starts at $3,275.