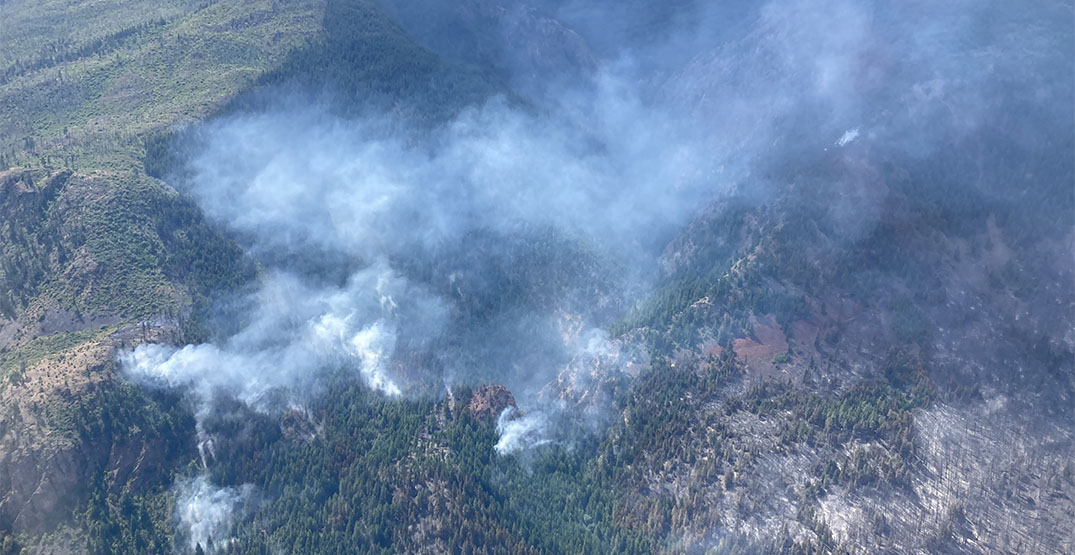 The BC Wildfire Service is sending more firefighting crews to Lytton, BC to battle an out-of-control fire that’s grown to 1,500 hectares in size.

The Nohomin Creek wildfire broke out Thursday and has already burned down several people’s homes, officials said in an update Friday. The fire was about 800 hectares big Friday morning, but nearly doubled in size by Friday evening.

Another 21 firefighters and and 15 building protection specialists will arrive in Lytton Saturday to help secure the perimeter of the fire so it doesn’t get bigger.

The north flank of the fire is largely smouldering, but the steep terrain in the area is making things difficult for firefighters.

“On the south flank, crews will continue to establish control lines by constructing a fuel free, hand guard and water delivery system. This will be followed using small scale ignitions to clean up un burnt fuel between the fire perimeter and a scree slope that is being used as a natural control line,” the Wildfire Service said.

On Friday, the Wildfire Service said the fire near Lytton was showing rank 4 or 5 behaviour, with “crown” flames.

This video was recorded earlier today and shows rank 4 and rank 5 wildfire behaviour. This means the fire is a crown fire with an organized flame front and a moderate to fast rate of spread. Tree candling and short-range spotting has also been observed. pic.twitter.com/qhwKAWL7NM

An evacuation order was issued for some residences on Friday, while other communities were put on evacuation alert.

The fire is burning less than two kilometres away from Lytton, the BC town that was destroyed in another wildfire last summer.

The community broke hot weather records for three days in a row during the heat dome before being engulfed in a wildfire that killed two people.