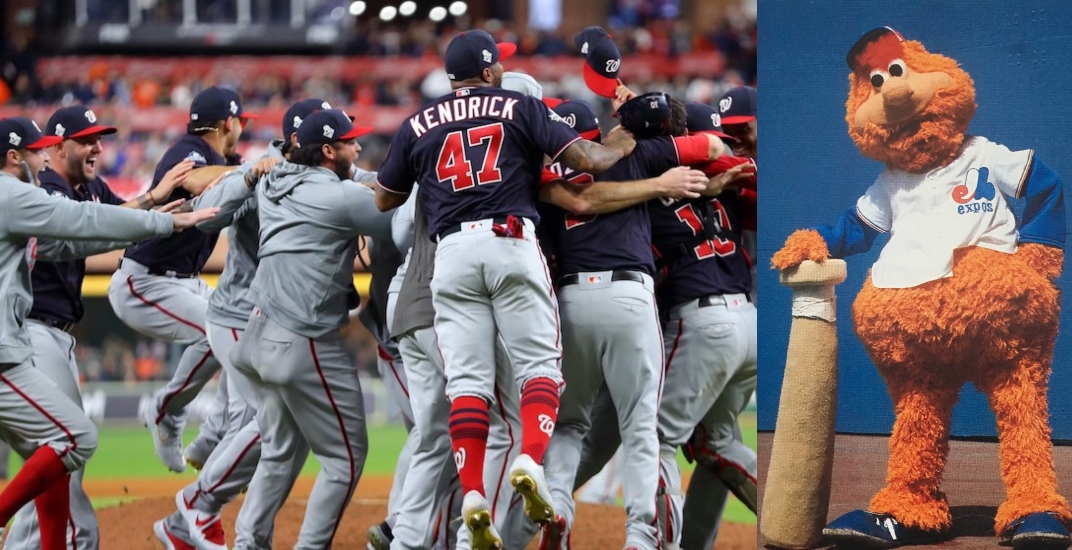 It’s been 15 years since home base was stolen from the Montreal Expos, a franchise that went on to become the Washington Nationals.

On Thursday, the Nationals completed a remarkable postseason run by defeating the heavily-favourited Houston Astros 6-2 in Game 7 of the World Series.

Expos fans were quick to hop on Twitter to celebrate the Nats’ first championship like it were their own.

hey look at us

Coincidently, for the first time since the Expos left, the Nationals sported baby-blue Expos uniforms for one game in July, paying tribute to the team that was gobbled up by America’s capital city.

From thanking the city, the fans, former players, and Youppi!, here’s how Montreal Expos fans have been reacting throughout the Twitterverse as #MontealExpos was trending in Canada in the wake of the Nats’ World Series victory.

And indeed, they did! The @Nationals shocked the world, took the trophy to the nation’s capital, and made many Montreal Expos fans happy again! Enjoy guys, you deserve it! #WorldSeries #Nationals #teamwork https://t.co/h2lXMNRP65

Expos finally win! (Just let me have this one) pic.twitter.com/cpA38UUZ98

Congrats @Nationals but somewhere this guy is overdosing on poutine in celebration.
❤️ Montreal Expos pic.twitter.com/qbPY8kUCDC

The Washington Nationals win Game 7 with former Expos player Dave Martinez as their Manager, and Daniel Hudson on the mound (he started the year with the #Jays). ⚾⚾

Being a life time MONTREAL Expos fan you baseball peeps will understand why screams and tears and smiles are abound at the Coates Castle. Congrats NATIONALS….. so happy for you boys. KC. 🥃💪 pic.twitter.com/LmO8FiOJCE

THE MONTREAL EXPOS HAVE WON THE WORLD SERIES! 🇨🇦

And congratulations to #Youppi! too!

Congrats to the Montreal Expos for winning the World Series #WorldSeries pic.twitter.com/8BF7g4YLBX

Congratulation to the Montreal Expos on their first championship. Magnifique!!! pic.twitter.com/YfWVIieOAm

Montreal Expos win the World Series! EXPOS GET THE CHAMPIONSHIP THEY WERE DENIED! Youppi would (should) be so proud! #WorldSeries #WorldSeries2019 #LesExpos #MontrealExpos pic.twitter.com/bKMCZlCncz

Congrats to the #MontrealExpos on winning the #baseball Stanley Cup!

I was Impressed that the announcers and colour analysts gave the Expo’s a shout out after the series was won. We miss our #MontrealExpos and hope they come back soon https://t.co/SeEp12ruQW

Gary Carter is smiling from above. #MontrealExpos