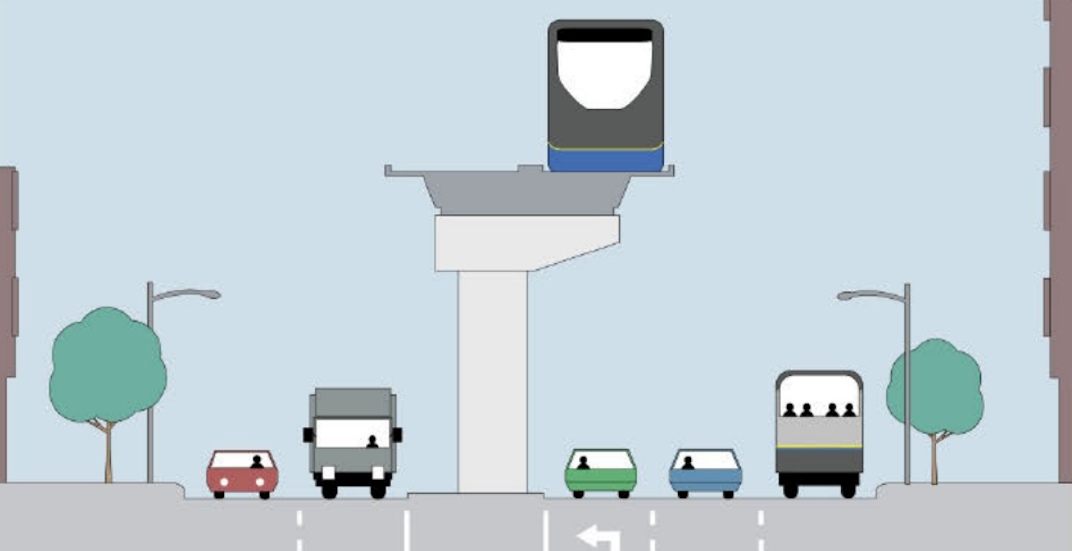 Typical configuration of elevated SkyTrain on Broadway. (Government of BC)

Could SkyTrain’s Millennium Line Broadway Extension run as an elevated track for most of its length instead of a tunnelled track on Broadway between Main Street and Arbutus Street?

This question is answered in a Strategic Options Analysis, dated March 2018, by the BC Ministry of Transportation, which has taken over the $2.83-billion, 5.7-km-long, six-station project from TransLink.

An elevated concrete guideway, similar to the Canada Line on No. 3 Road in Richmond, would likely result in lower overall construction costs, but would decimate Broadway’s function as one of the largest east-west road arterial routes in the city.

According to the report, with an elevated option, a tunnelled segment would still be required between the False Creek Flats, with the extension starting just east of VCC-Clark Station, and the area of the intersection Main Street and Broadway due to the steep grades. With this option, only the Main Street station on Broadway would be underground.

The width of the tunnel portal – the gradual transition from tunnel to elevated guideway – immediately west of the Main Street station would require the acquisition of two city blocks of properties on the north side of the street.

Such a real estate acquisition would be extremely costly; based on the latest property assessments by BC Assessment, the assessed value of all of the properties on a two-block stretch on the north side between Quebec Street and Manitoba Street totals over $70 million.

West of the tunnel portal, the concrete columns that support the elevated guideway would necessitate about five metres of space, effectively eliminating two of the six road lanes on Broadway. This would remove all on-street parking along Broadway, and local buses will be required to stop within the travel lanes at bus stops, reducing road capacity even further and creating additional congestion.

The only placement option for the elevated guideway is down the middle of Broadway to maximize the distance from existing buildings.

“The introduction of an elevated SkyTrain along Broadway would introduce noise and vibration issues for existing buildings that were not designed to mitigate these issues,” states the report.

In comparison, the elevated guideways for recent SkyTrain projects in Richmond and the Tri-Cities were situated on the side of the road where there were limited impacts on adjacent buildings due to large setbacks for surface parking lots. In the case of No. 3 Road, no road capacity was lost from the elevated guideway as the now-defunct 98 B-Line’s bus-only travel lanes and median provided ample space for the columns and a complete redesign of the street. 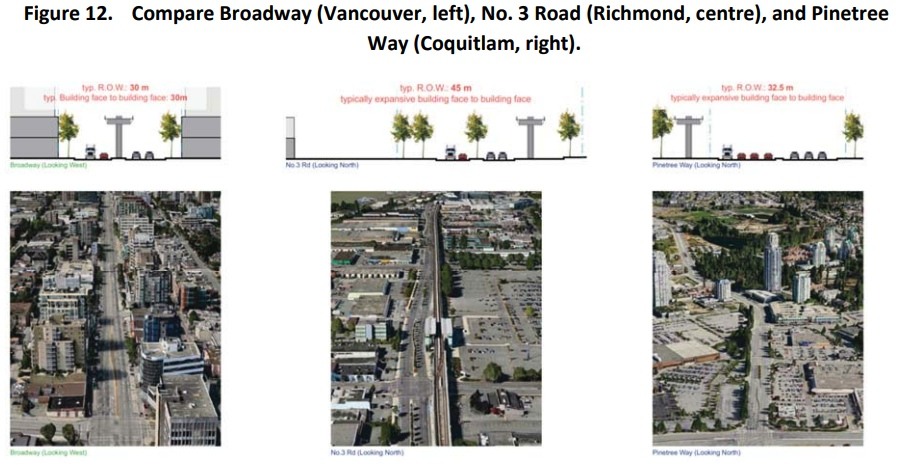 As well, the restricted sightlines for drivers, a result of the concrete columns in the middle of the street, would mean 32 left turns along Broadway would no longer be permitted. Only 11 left turn opportunities can be made available at major intersections on Broadway between Main Street and Arbutus Street.

“In addition to the removal of travel lanes, the elevated alignment introduces sight distance restrictions around the columns, which will require dedicated turn lanes to accommodate protected turn phases at major intersections,” reads the report.

“These turn lanes can be accommodated within the alignment at major intersections without further land acquisitions, however, insufficient space exists for these movements at minor intersections. The result will be significant impacts, and increased traffic on local streets as vehicles are forced to use local streets for both parking and access businesses between the major streets where left turns are no longer possible.”

Additional setbacks and airspace required for the elevated guideway and elevated stations would also have “significant impacts” on the scope of transit-oriented redevelopments along the entire corridor. This is on top of the City of Vancouver’s self-imposed view cone height restrictions and Transport Canada’s height restrictions around Vancouver General Hospital’s helicopter landing pad.

Under Metro Vancouver Regional District’s growth plan, the downtown Vancouver peninsula and Central Broadway Corridor are together the Metropolitan Core of the entire region – the highest growth zone in Metro Vancouver.

“Broadway has been highlighted as a priority location to encourage greater housing development to aid affordability in the Metro Vancouver region, and the elevated guideway would challenge achieving greater housing opportunities close to transit,” continues the report, which notes Central Broadway is already the second largest employment centre in BC after downtown Vancouver.

“This is a unique area that competes in a global market for employers as well as the best and brightest talent. Broadway lies at the heart of this job centre and has the potential to become a street that effectively balances transportation needs while maintaining an urban realm that attracts businesses to the area. Negatively impacting the Broadway streetscape could make Metro Vancouver less attractive to the talent pool, and employers may choose to set up in other regions such as Seattle, San Diego, Toronto, or London.”

What we know so far about the tunnelled design

The provincial government’s documents released this month provide a further glimpse of what the extension of SkyTrain infrastructure could look like.

The Broadway Extension is currently envisioned as a twin bored tunnel after a 700-metre section of new elevated guideway between VCC-Clark Station and the elevated-underground transition before Thornton Street.

The boring machines will move westward from the area of Great Northern Way and Thornton Street, where an underground station is also planned to serve the area’s emerging arts, tech, and digital hub.

Other underground stations will be located at Main Street, Cambie Street, Oak Street, Granville Street, and Arbutus Street, with these stations averaging at a depth of about 15 metres below ground level. The only exception is Cambie Station, as the bored tunnels must pass below the shallow, existing Canada Line cut-and-cover tunnel.

The use of twin bored tunnels suggests a centre platform configuration, similar to the Canada Line’s downtown platforms, for most stations.

The report states each station will be built with a single entrance from the street, except for Cambie Station, which will use the Canada Line station’s existing entrance. Underground pathways will be constructed to allow the creation of an interchange between the Canada Line platforms and the new Millennium Line platforms.

Some of these design elements could change after procurement, which is anticipated to begin this fall.

With funding now completely confirmed, construction on the project is set to begin in 2020 for an opening in 2025. This new extension is expected to attract 140,000 boardings per day upon opening.