If it seems like Metro Vancouver’s roads are now busier with vehicles compared to the weeks prior, it is because they are definitely getting more traction.

Separate traffic volume statistics provided to Daily Hive Urbanized by TransLink, BC Ministry of Transportation, and the City of Vancouver confirm anecdotal observations that vehicle traffic is indeed trending upwards, after experiencing a sudden collapse in March due to the onset of COVID-19.

This is, of course, reflective of the widespread physical distancing and self-isolation practices, the avoidance of public transit, and the shutdown of workplaces and changing labour market conditions.

Although there has been a notable increase, vehicle volumes as of the middle of May were still clearly below the levels of the same period in 2019. But volumes will likely continue to increase with the gradual reopening of businesses, attractions, and workplaces under BC’s restart plan.

By April 21 to 24, volumes increased to an average of 71,081 per day, which is a 37% decrease over the same period last year. The gap continued to narrow for the period between May 4 to 8, with average volumes hovering at 77,000, representing a year-over-year decrease of 31.3%.

This clear upward trend was visibly replicated on other Metro Vancouver crossings.

The Port Mann Bridge saw a 42% year-over-year drop in its average daily volumes between March 23 and 27. Average daily traffic for the periods from April 6 to 9 and May 4 to 8 dropped by 35% and 33%, respectively.

Further up the corridor, there was a 64% year-over-year average daily volume drop on Highway 99 near Whistler from March 25 to 29. Traffic has since increased significantly, reaching 63% of 2019’s levels — a year-over-year decrease of 37% — for May 4 to 8.

Vehicle traffic on Thursday, April 2, compared to a typical weekday in Spring 2019, saw a 47% decrease within all of the City of Vancouver’s jurisdiction and 55% within downtown. Citywide volumes were also down by 43% for cycling and 60% for pedestrians.

On Tuesday, April 7, vehicle traffic was down 44% within city limits and 53% within downtown. Pedestrians volumes also fell by 55%, but at this point cycling volumes were up by 17%.

In contrast with comparable days in 2019, more detailed data shows overall cycling volumes fell by 1% on Tuesday, April 21, with commuter cyclists down by 39%, recreational cyclists up by 46%, and pedestrians down by 63%. Vehicle traffic on this same day was down by 41% within city limits and 52% within downtown. 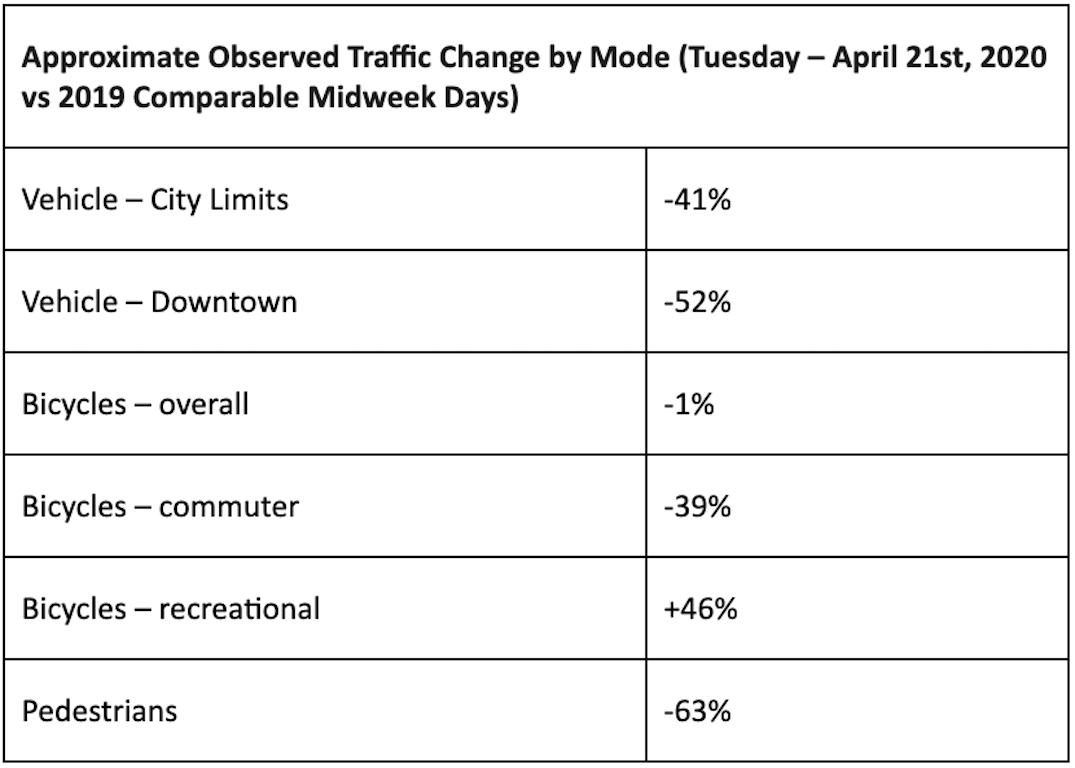 Vehicle traffic inched closer towards normal levels with each passing week. By Wednesday, May 6, vehicle traffic dropped by 37% within city limits and 45% within downtown. Cycling was down by 8%, including a drop of 48% for commuter cyclists and an increase of 31% for recreational cyclists. Pedestrian traffic was down by 55%.

As of Friday, May 15, vehicle traffic within city limits and downtown decreased by 28% and 36%, respectively. Cycling traffic saw a 55% increase, with the 85% increase in recreational cyclists accounting for much of the overall uptick. Changes to commuter cyclist and pedestrian traffic remained relatively constant, with volumes down by 8% and 49%, respectively. 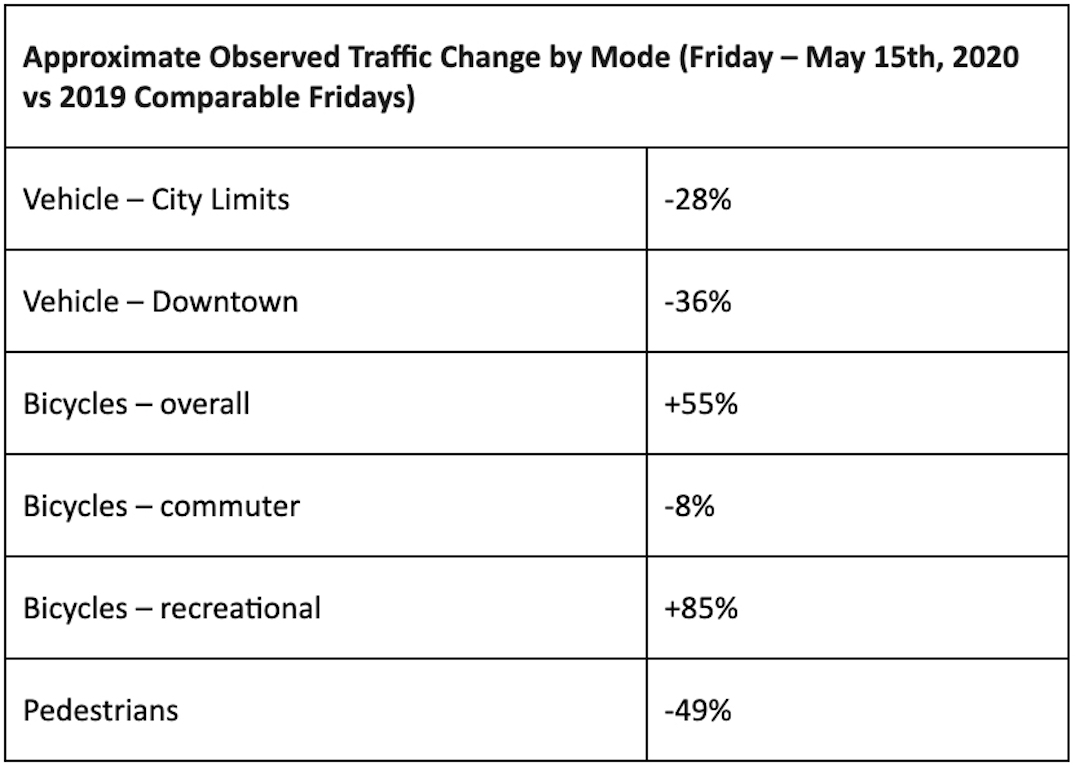