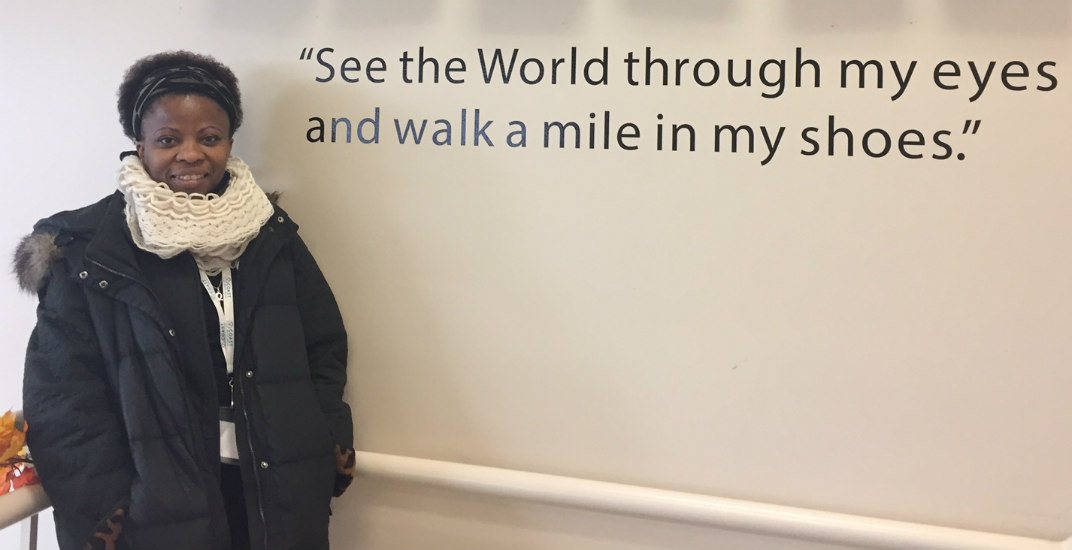 My name is Althea Adams. I am a peer support worker for Coast Mental Health.

A lot of people don’t understand that mental illness can hit you at any time. We all have the potential for it inside of us. It is unforgiving. Sometimes it’s visible but there are many of us who have mental illness and are still functioning.

I have severe depression. When it hit me, I was doing a lot of things that I loved. I had gone back to school to become an early childhood educator – working with children had always been a love of mine. I was having a great time but I was also going through a lot of pain and sorrow, too. It snuck up on me. All of the sudden, things started piling up – housing stress, work stress, money. I wasn’t sleeping.

There’s a two-week period of my life before I admitted myself to Vancouver General Hospital that I just don’t remember. That’s a frightening thing, not remembering two weeks of your life.

I was in the hospital for a month. I was released but soon I started not feeling well again so I went back. While I was in the hospital, I was helping a lot of other people, even though I was going through my own trauma. The staff there noticed and they told me I should be a peer support worker – somebody who uses their own lived experience of mental illness to support others going through the same thing.

I’ve been a peer support worker with Coast Mental Health since 2016. Going through peer support worker training, I learned so many things about how to help others. I learned how to speak with doctors and counsellors. I also learned that sometimes it is listening and just being kind and loving and friendly. A lot of people don’t realize that if you just sit and listen, somebody can tell you their whole life story just like that, or they can tell you what they need, or what’s hurting them.

A lot of people who have mental illness become homeless and when you’re homeless, nobody wants to listen to you. They think you’re just a bum. People become homeless because one instance comes and changes their entire life. They can’t move on because there is nobody there to help them. There are no jobs they can go to. Housing is horrible. They are afraid. Some people are strong but some are not as strong and they just feel like they’d rather die than live like this.

If someone were to read this who is suffering from mental illness now, I’d say to them, “Believe in self and anything is possible”. When you believe in self, you can do so much.