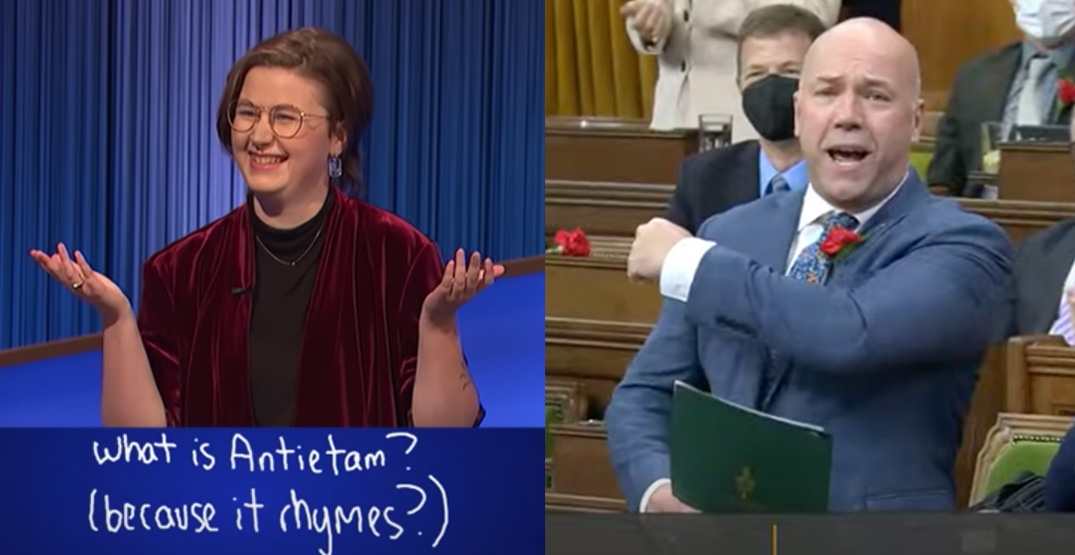 The Halifax-born contestant received a sweet shoutout and standing ovation in the House of Commons on Wednesday morning, then demolished her competition that night, extending her winning streak to 22 days.

He went on to praise the Toronto-based tutor for holding the fifth spot for longest winning streak and for being the most successful Canadian to ever compete on the game show.

“Communities across the country have cheered on the 23-year-old, including in my riding of Halifax where she was raised and attended Sacred Heart School,” Fillmore remarked.

He added that Roach has ties to Ottawa as well, having had a stint as a parliamentary page, before asking the MPs to join him in congratulating the Jeopardy! superstar.

“Mr. Speaker, I’d wager it all on the Daily Double that there’s still much more to come!” exclaimed Fillmore. “Way to go, Mattea!”

Communities across Canada, including her hometown #Halifax, are cheering on @mattearoach as she continues her history-making winning streak on @Jeopardy!

Today I led the House of Commons in congratulating her on becoming Canada’s very own Jeopardy super-champion! Bravo Mattea!🇨🇦 pic.twitter.com/YJmBDYVy36

Fillmore would’ve won the Daily Double if he were on the game show, as Roach showed no signs of slowing down, with an easy-breezy 22nd win.

The final Jeopardy! clue tested the 23-year-old’s civil war knowledge: “A union soldiers’ song said General McClellan, who let a confederate army escape after this battle, ‘was too slow to beat ’em.'”

Roach answered, “What is Antietam? (because it rhymes?)” and made the very safe wager of $0 (as stated by co-host Ken Jennings, the contestant is apparently not a civil war buff).

The quiz whiz was leading the pack with $28,400, so the wager did not hurt her chances of winning.