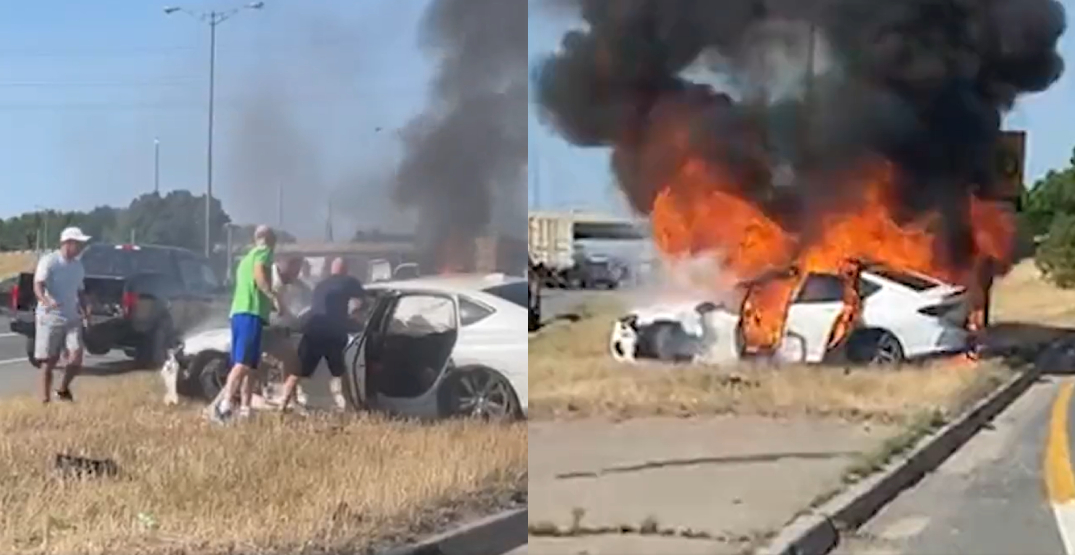 A 36-year-old Toronto man is alive thanks to the heroic efforts of five strangers.

Ontario Provincial Police say the man, 36, was experiencing a “medical episode” while driving westbound on the QEW last Monday. The vehicle began swerving with smoke coming out of it.

OPP shared a video, which appears to have been filmed by a passerby. In it, three of the men are kicking doors and smashing windows to get the driver out safely. One can be heard screaming, “buddy, get out of here!”

A 36 year old man from Toronto who experienced a medical episode is alive because of the heroic efforts of five men who risked their lives as the vehicle began to burn with the driver still inside. They got the drivers door open to save the driver. You are my #HERO. July 4, ’22 pic.twitter.com/bwE43tMhn1

The driver was rescued just moments before the white Sedan burst into flames.

Three men are being recognized for their bravery by many city officials including Bonnie Crombie, the mayor of Mississauga. In a tweet, Crombie says the motorists are nominated for Fire Chief Commendation Awards by Mississauga Fire and Emergency Services.

Proud of the motorists who took quick action to save the life of another driver on the QEW near Cawthra earlier this week. These heroes have been nominated for Fire Chief Commendation Awards by @MississaugaFES in recognition of their bravery and courage in the face of a crisis. https://t.co/Gwiexx1kGg

Chief Deryn Rizzi of the Mississauga FES released a statement via Twitter acknowledging the names of the three nominees: Charles S., Fabricio L., and Tyler A.

Rizzi states that the driver suffered first-degree burns to his arms and face but could have died had it not been for those three men.