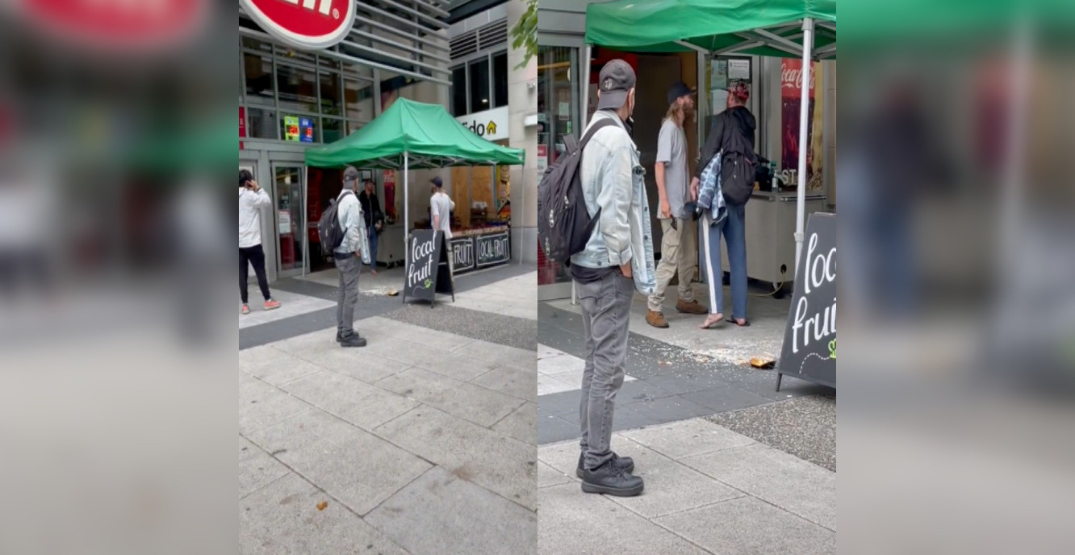 A fight between two men outside a downtown Vancouver grocery store is raising a lot of questions after one of the men was spotted waving an axe.

In the video posted to TikTok, the man with the axe can repeatedly be overheard demanding the other man to “go,” and “get the f*** out of here.”

The poster says no one was hurt in the fight and the video only shows a portion of the incident.

@vancouveraction Man pulls an axe to a man in Vancouver downtown robson and richard street altercation :0 thankfully nobody was injured since the cops areived at the scene #downtownvancouver #downtown #vanocuver #vancouverbc #englishbay ♬ original sound – Coco

Vancouver police Sgt. Steve Addison says it happened late Monday afternoon and began when an alleged shoplifter was confronted by store security at the IGA on Robson and Richards streets.

Police say a bystander stepped in and confronted the suspect.

Police confirmed two people were initially arrested but one was taken to jail.

A short time later, the video shows the man carrying the axe was also handcuffed after a bystander audibly told police he had a weapon.

@vancouveraction Here is part 2 of the video. The cops arrive and reprimend one of the suspects who was not carrying the axe. The police got calls of someone trying attack someone with an axe jot realizing it was the person right behind the officer. I had to let them know it was he who was carrying the axe. You can see one of the undercover cop with a shotgun. Do not worry nobodh was hurt thabkfully. This happend in robson and richard street #downtownvancouver #downtown #vancouverbc #englishbay #vancouver #fyp ♬ original sound – Coco

Charges have not yet been laid.