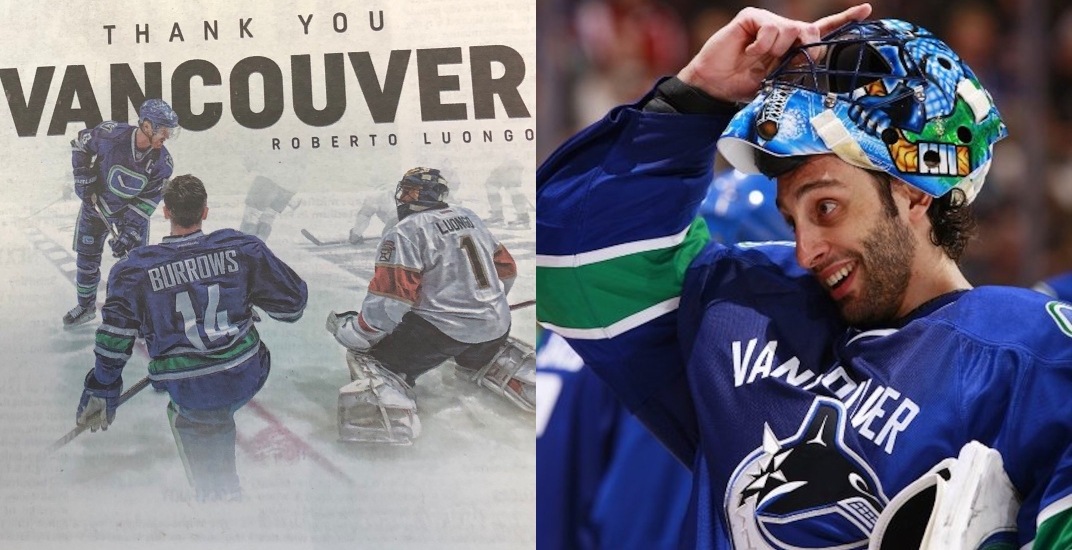 Roberto Luongo left a lasting impression on Canucks fans during his eight seasons in Vancouver.

The feeling is mutual.

Luongo, who announced his retirement after 18 NHL seasons on Wednesday, bought an advertisement in Thursday’s Province newspaper to thank the people of Vancouver.

“I’m glad I got to share some of my best hockey memories – from the Stanley Cup Final run, to the Olympic gold medal – with the fans in Vancouver,” Luongo wrote in the ad titled “Thank you Vancouver.”

“I want to take a moment to thank the people of Vancouver. I’ll never forget the impact that city and their fans made not only on my career, but on my life as well. They will always hold a special place in my heart.”

What a classy gesture from a first-class athlete.

Luongo ranks first all-time in Canucks history in wins, shutouts, save percentage, and goals against average among goalies with 100+ games played.

He not only starred for the Canucks during their most successful era, he backstopped Canada to an Olympic gold medal at the Vancouver 2010 Olympics. Through it all, fans serenaded him with chants of “Luuu,” and continued to do so when he returned to the city as a member of the Florida Panthers.

The surefire Hall of Fame goaltender also connected with Canucks fans on social media, following many of them on his hilarious Strombone1 account. He even published a video for the Shapys (a made up awards show by a group of fans) during the 2012-13 lockout and participated in fantasy football leagues with fans.