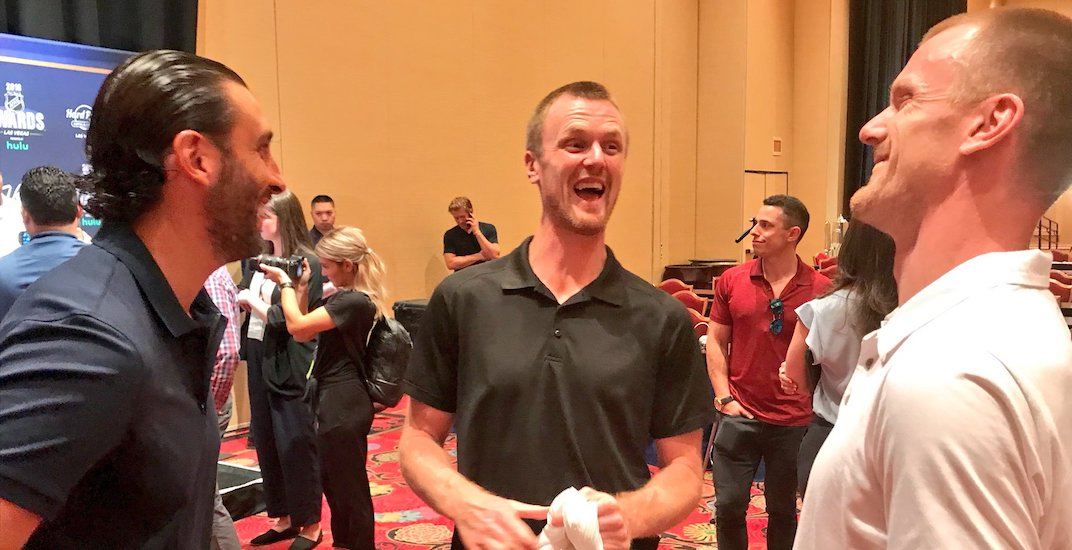 No name, no face, just @Strombone1.

After years of speculation, in February of 2013, Roberto Luongo took part in an interview on Hockey Night in Canada, confirming that yes, the hilarious account did indeed belong to him.

“You gotta be able to make fun of yourself in life,” he told CBC’s Scott Oake. “I don’t wanna take things too seriously; I wanna keep it lighthearted.”

Fast forward to 2019 and it’s still one of the funniest, wittiest accounts in the world of hockey — the result of Luongo’s humour and personality that previously wasn’t often shown during interviews.

In honour of one of the NHL’s greatest goaltenders announcing his retirement, here’s a quick look at Luongo’s (or Strombone1’s) best tweets:

Me and Tom Brady have a combined 5 championships! #blessed

In the fetal position inside the net https://t.co/S7TQd78PFg

Zero chance Chara fits in one of these! #tightquarters pic.twitter.com/h6VpQKpo

.@BizNasty2point0 ur not the only 1 that can rock fancy designer shoes! Hit me up if you want a pair of these bad boys pic.twitter.com/9QSoA5fR

Instead of hockey night in Canada, this is what my Saturday nights have come down to….. #cryforhelp pic.twitter.com/QyCjUAp9

Wow this is so crazy……. You could barely fit JVR’s name on the back of that jersey…….. pic.twitter.com/ZsjoAHZo

I have a confession that I’ve been keeping from you guys for way too long…… pic.twitter.com/ESdKcrlg

Hey @NHLFlyers I’m more of a #shitthebed kinda guy but I’m willing to try anything at least once….. #shitthebeach pic.twitter.com/0mXNT2MrTV

Must have lost my #ESPYS invite nomination in the mail for “best moment” pic.twitter.com/NiVmrLz5b0

And this is why I don’t wear cream colored pants….. Wtf @eddielack ????? pic.twitter.com/AXfhCpwvZw

Buffon is out today?
GUYS I GOT THIS!!! pic.twitter.com/Z4PVLkEtaY

Whenever a goalie scores in his own net I always laugh cuz I know I could never let that happen to me! #WorldCup2014 pic.twitter.com/8v92P0nQhy

To all of you that drafted me on their fantasy hockey teams, rest assured,I’ve been working on some new techniques… pic.twitter.com/ZSfqosx6Q2

Let me tell ya…. Wasn’t easy holding that stick there with all that oil on…… pic.twitter.com/eV0gHgXLOQ

I will make it my mission this year, work 24h around the clock 2 get Jags to bring this puppy back! It’s gonna happen pic.twitter.com/NcAiEzmtmU

Thank you @NHL for not scheduling any games on Halloween so we can take our kids trick or treating…….. pic.twitter.com/QTb397vl3O

You know the boys have confidence in your goaltending skills when 3 guys line up to block a shot…..🚨🥅🚨 pic.twitter.com/Q5QfxrDnsm

Took me a while to master this very difficult advanced technique…… pic.twitter.com/znw7jKVtad

Did not sleep for one second last night cuz….. pic.twitter.com/TBRud6zaId

I’ve decided to take my talents to a South Beach retirement home ✌🏼 pic.twitter.com/BTuZIo8XT8