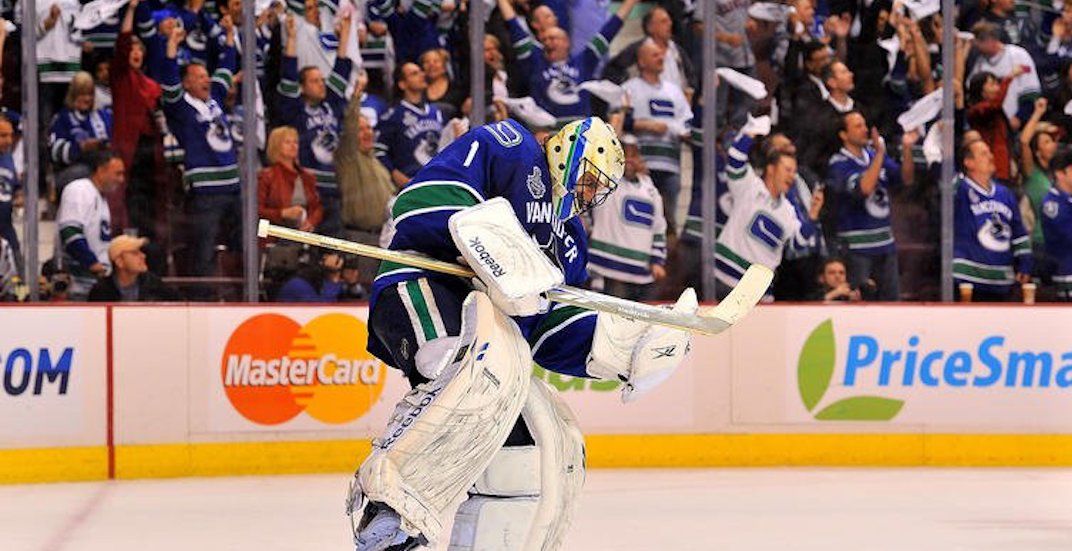 Every Canucks fan old enough to remember the summer of 2006 has a story of where they were when they heard the news that Vancouver had acquired Roberto Luongo.

There aren’t many “where were you when…” moments in this town’s sporting history, but trading for Luongo? That’s damn sure one of them.

My story? I was camping and going off the grid, in true Ryan Hartman fashion. Cell phone coverage was spotty at the best of times. Before I left I had heard rumblings of Luongo possibly being on the move to Vancouver, but it was hard to believe something so fortuitous could occur for this franchise. Dave Nonis didn’t exactly instil confidence as a big mover and shaker kind of guy, the big Tommi Santala signing notwithstanding. Still, I would venture out now and then to try and find a spot to get cell service just to see if there was any news.

Which is how I found myself holding my slick Blackberry 8700c, reading a text from my buddy containing three simple words: “Canucks got Luongo.”

It felt surreal. It felt strange. It felt like a time to celebrate like the Canucks had won the lottery, to be honest.

To show just how big of a trade this was, look at the big piece that went the other way. Todd Bertuzzi, a member of the West Coast Express was gone. Todd Bertuzzi, a man who in 2003 terrorized the NHL in a way not many power forwards ever get to realize. Sure, the WCE started dying the night Todd punched Steve Moore, but to have it officially end? To know you would no longer see Bertuzzi, Naslund and Morrison causing havoc for other teams in the offensive zone?

That should have been a time for reflection. A time to think back and give a fond farewell to a line that had thrilled a city like no other, a line that had helped drag the Canucks away from the rotting corpse of Mark Messier’s legacy in Vancouver. The WCE symbolized a new lease on life for Canucks fans, yet the day Bertuzzi got traded for Luongo, all you could hear was “Luuuuuuuuuuuuuu” all across the province.

And for good reason, too.

Remember, in 2003, the Canucks had a glorious road to the Stanley Cup open up in front of them, only to see it falter on the shoulders of below average goaltending and Darby Hendrickson point shots.

Goalies and arena food have never been a strength for this team, we all know that. Richard Brodeur had a good run in 1982, yes. Kirk McLean put on the best performance of any Canucks goalie in a Stanley Cup Finals ever, in 1994, of course. But consistent, top flight goaltending? That was something this town had never experienced.

So with the arrival of a goalie who was widely viewed as one of, if not the, best young goalies in the game? That was unheard of. That is why so many of the “where were you when?…” stories include a lot of “I was running down the road screaming ‘LUUUUUUUU’! with my buddies!”

And so began the rise of Roberto Luongo in Vancouver.

It wasn’t always easy, of course. When he first arrived you could tell he was shocked by the trade. He was also a restricted free agent who had run into a contract dispute with the team he loved that led to the trade in the first place. It was quite easy to fall into the nightmare scenario of him refusing to sign a multi-year deal with his new stranger danger city, so he could run back into the arms of his true love a year later.

And even when he was signed to a new four year deal, it was clear his heart was still in Florida to the point that he kept a Pink Panther tail on the back of his first Canucks mask. It was like having a new boyfriend/girlfriend move in but still wearing the shirt of the band their ex was the lead singer in every night to bed.

And this kind of set a theme about Luongo’s first few years in Vancouver, one of the city begging him to give them a chance and always feeling like Luongo held them back at arm’s length. It’s why when Luongo was named captain it had a bit of that vibe you see from Toronto surrounding Kawhi Leonard. Doing anything and everything to show the superstar why they should choose this city to remain in. Do this long enough with the balance of power remaining too far on one side, and it begins to wear on people.

And I think that was the tone around Luongo and the team early on. People loved Roberto’s on ice performances, but he never got that special connection with the city that he would later achieve. Which sure, in sports might not be viewed as an important thing in the long run, but if you look at any player that ends up beloved by a franchise, it’s because they find a way to show their human side. They pull back the curtain and show who they really are and allow people to relate to them. It’s one the reasons Elias Pettersson is so special, because he gets this market, and he SEES the fans in this market. Bo Horvat may very well be the next captain, but mark my words, Pettersson will create a stronger bond with the fans of this city.

But with Luongo, that didn’t happen until after 2011. Until the Sedin Era was beginning to crumble. When his contract famously became a big pile of suck. With Cory Schneider kicking down his door and taking his job and Luongo being tossed to the side.

It was during the lowest part of Luongo’s Vancouver career that we finally got to know him a little bit through the @Strombone1 Twitter account. All of a sudden an athlete who was perceived as arrogant and stand-offish, was a humble and funny guy. The turnaround on the narrative surrounding him was honestly quite amazing.

Seriously, if you weren’t around for the pre-2011 days, Luongo and scrums were like watching a bad episode of Suits. Tense moments with lots of glaring, and with both sides competing to see who could give the most terse statement, trying to see who would storm off first. It was like having a conversation with your annoyed step father about why you couldn’t borrow his car on a Friday night.

But when Luongo was moved to the side for Schneider, and he knew he was on the way out of Vancouver, he found the magical formula; don’t take yourself too seriously. Sure, don’t go to Eddie Lack levels of having fun (god knows you aren’t allowed to be TOO happy and honest lest you be accused of not wanting it enough), but if you find that perfect sweet spot of knowing when to laugh at yourself, you’ll do just fine in this market. And so began a new era of Roberto Luongo, a man with humility, and man who we could relate to and feel sympathy for.

Long gone was the guy in scrums who was “throwing teammates under the bus” and in his place was a guy not being traded at the deadline and sadly telling his city that his contract sucked. He found a way to show enough of his true self to really connect with the fan base. It was like now that 2011 was over, and the Cup window was closing, we’d could all sit around the campfire and share war stories and laugh about times gone by.

And it wasn’t just the Twitter account. It was Luongo starting football fantasy leagues with Vancouver fans. It was Luongo partaking in YouTube videos for a fake Canucks season using EA Sports during the lockout. It was Luongo diving into Shap (you had to be there). It was Luongo coming up to me in the locker room and asking if I was going to put him in the NHL Royal Rumble I was simulating in WWE2k13.

“You’re gonna put me in there, right buds?”

It was Luongo simply sitting back and just talking with the fans and being approachable and human. Luongo became one of us during that time, something not many athletes achieve.

It was also seeing Luongo do whatever a team asked of him even as it was trying to kick him out the door. To the point that when Schneider got traded on draft day, the team had to ask him to resume his role as the number one guy as if the last two years never happened.

And you know what? Luongo just got down to business and did it.

And just when it felt like we could fix things, that the relationship had been repaired, that maybe Luongo could run out that long contract here, Murphy Bed Torts showed up.

Yes, the Heritage Classic debacle reared its ugly head when John Tortorella gave Eddie Lack the start over Luongo. It was the last straw for a man who had tried to do everything a team had asked of him, without complaint. Both sides knew that a third divorce was inevitable and there was nothing but love and support for the man who arrived so many years ago, unsure of the new city before him. Preparing to watch Luongo leave for the last two years had given the city plenty of practice on how to say goodbye properly.

And so Luongo went back home. Back to where his heart had always been.

The rise and fall of Roberto Luongo in Vancouver is truly one of the most fascinating periods of time in Canucks history. And this is without mentioning the one ice statistics that we didn’t even touch on.

The countless Canucks records he set. The 40+ win seasons. Jim Hughson screaming “GREAT SAVE LUONGOOOOOOO!” The “LUUUUUUUUU”‘s from the fans. The Vezina Trophy he was robbed of in 2007. Game 5 against Anaheim, which might be one of the best games we’ve seen from a goalie in this town. The goalie battle against Marty Turco in the 2007 playoffs. The Olympic gold medal on home ice. The poop heard around the world. 252 wins, 38 shutouts, and .919% career save percentage. The save on Patrick Sharp that let Alex Burrows slay a dragon. The run to the Finals in 2011, tire pumping and all.

He truly was the best goaltender this town has ever seen.

So while Roberto Luongo might have found a home in Florida, make no mistake about it, he left a piece of himself here. And we in turn left a piece of ourselves with him. You don’t go through the wars with Chicago and having Byfuglien’s big booty rammed in your face without creating a timeless bond, let’s be honest.

It’s also clear that there is one last piece Luongo can leave behind, and that’s his number. Raised to the rafters. Where it belongs.

One last time, for the people in the back.