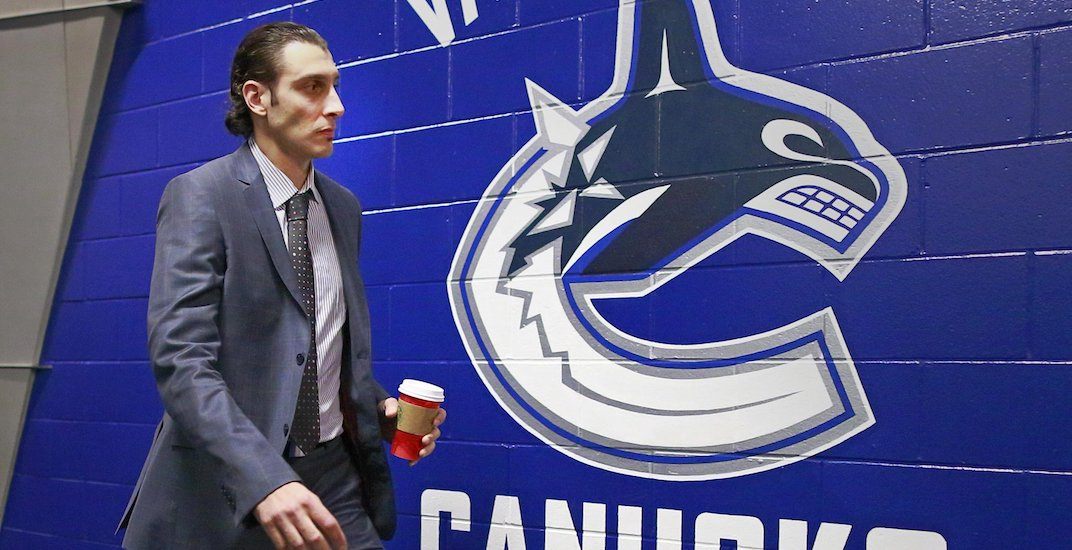 After more than a thousand NHL games, Roberto Luongo called it a career at the age of 40 on Wednesday.

He never won a Vezina Trophy, but probably deserved one in 2007 when he dragged a sub-par Canucks team into the playoffs. He never won a Stanley Cup, but boy did he come close in 2011.

He did win an Olympic gold medal, twice, including as Canada’s starter at Vancouver 2010.

But despite his accomplishments and his advanced age, Luongo said it was difficult to step away from the game he loves. In fact, he called it “one of the toughest decisions” he’s ever faced in his life.

In the end, Luongo says he needed to listen to his body, which had broken down after years of elite competition.

There’s a lot I want to say.

This is one of the toughest decisions I’ve faced in my life and it took me a long time to make it.

After thinking about it a lot over the past two months and listening to my body, I made up my mind. It just feels like the right time for me to step away from the game.

I love the game so much, but the commitment I required to prepare, to keep my body ready, has become overwhelming. Since I had my hip surgery a couple of years ago, I’ve been showing up two hours before every practice and three hours before every game to work out my hip. Even at night, whether it was the night before a game or even a night off, there I was rolling out, doing strengthening exercises. My entire life revolved around recovery, strengthening and making sure I was ready to go the next day.

I was willing to make that sacrifice because I love the game, I love being part of it, being in the action and competing with my teammates. I was willing to go through it all for my love of hockey.

After this season ended and I had an opportunity to step away, I started thinking about things. Looking back at last season, I just wasn’t happy with my performance. I played better in the second half, but it wasn’t up to the standards I expect of myself on a nightly basis. I wanted to be the backstop, to give my team a chance to win every night. I wanted to be on top of my game, stealing wins. It just wasn’t there, at least not as much as I wanted it to be.

As May rolled around, I was looking at the calendar and I found myself dreading getting back into my routine. My offseason workouts always start in the third week of May and I wasn’t looking forward to getting back in the gym. There’s a lot of work and effort required and I found my body telling me that it didn’t want to go through it.

Then thinking about getting onto the ice in late July, for the first time in my career, I wasn’t excited about it. That was the sign for me. It’s not that I don’t love playing hockey anymore, but I had to listen to my body. I’m at the point where my body was telling me it just needed a rest. It didn’t really want to get going.

So I’ve decided to retire, and it’s been really tough. One of the hardest things I’ve gone through in making this decision was when I told Gianni and Gabriella, my kids. Seeing them cry when I told them about it because they loved coming to the games and watching me play so much, it really broke my heart. We cried together. It was hard, it was really sad.

It’s also hard because I live to compete. We play the game to win the Stanley Cup, to give ourselves a chance. It’s hard because I think that this team is right there, close to taking the next step. I wanted nothing more than to be a part of that. With Coach Q coming in, it’s an exciting time for the Florida Panthers.

That made it more complicated and it wasn’t something I took lightly. I questioned it, should I give it one more shot? Should I take one more chance to go for it?

Talking to my friends, my family, everyone that I know, they were all telling me to go try and play one more year. Even though the people I love and trust the most were saying I should go for it, it never really swayed my decision. That was another sign, and there have been a lot of them over the past couple of months that made it clear to me that retiring was the right decision.

I owe a lot to the people who’ve helped me reach this point. My wife Gina, she’s always been there for me, she’s the love of my life and the rock of my family. My brothers Leo and Fabio for the late-night calls and their council during ups and downs in my career. My parents, for all the sacrifices they made over the years, especially in my childhood when they’d find a way to carve out time they didn’t have to bring me to rinks all across Quebec. And my in-laws, each one of them, for embracing me like family before I’d even met my wife.

I’ve also been blessed to work with some great coaches. When I was young, trying to make a name for myself and got drafted, Frankie Allaire was there helping me. Ian Clark is one of the best goalie coaches I’ve ever worked with and helped me a lot during my time in Vancouver. Rollie Melanson too, he played a big part during my later years in Vancouver. And Robb Tallas, the last few years in Florida, we developed a great friendship and a special connection. He always had a good sense of the mental side of my game. He just knew how to get me to where I needed to be to be at my best.

The list of great players I was lucky to share the ice with and great guys I was lucky to spend time in the locker room with goes on and on, whether it was in Florida, Vancouver or with Team Canada. In Vancouver, I played with the Sedin twins and Alex Burrows, who became one of my best friends. In Florida – it makes me feel old to say it – but I played with Pavel Bure in my first stint, and my second time around I got to play with one of the best players in the league in Sasha Barkov.

And obviously there’s the fans, everybody who has supported me over the years. I want to thank all of you from the bottom of my heart. My life in this sport has been a great experience, and I’m glad I got to share some of my best hockey memories – from the Stanley Cup Final run, to the Olympic gold medal – with the fans in Vancouver.

I want to take a moment to thank the people of Vancouver. I’ll never forget the impact that city and their fans made not only on my career, but on my life as well. They will always hold a special place in my heart.

Down here in Florida, I’ve been able to make this place home. It’s the best place to live in the world and the fans have always been so warm and welcoming. When I’m out in Parkland, they’re always going out of their way to thank me for what I did on the ice and for what I did off of it in addressing the community in the wake of the tragedy at Marjory Stoneman Douglas last year. It has always warmed my heart to hear those kind words from fans, and they’ve always had so many nice things to say to me about how I impacted them, in some small way.

I’m building a home in Parkland and it’s going to be my family’s permanent home for the rest of our time on this earth. I’m proud to be a Parkland resident. We’ve been through a lot, but we came together. We’ve tried to heal together and we’ve tried to make our community and our world a better place.

Now I suppose I have to tell you what comes next, but to be honest, I’m not really sure yet. Right now, for me, the most important thing is to take a couple of months off: let my body rest, enjoy some time with family, be home with the kids every day. We’re moving into a new house in late July, so it’s going to be pretty busy. Eventually, hockey is in my blood and I still want to be involved somehow, whatever it may be.

Once I’ve had some time to process this and make the adjustment, I’d love to be part of the Panthers organization. This is where my home is and I still love and want to be involved with hockey. At the end of the day, maybe I didn’t win the Stanley Cup on the ice, but perhaps I can still put my name on it in another way. It wouldn’t be quite the same, but it would still be quite the accomplishment.

As I go through that process, I don’t really want to spend every day talking about this decision. I’ll have more to say eventually, but I’m looking for some privacy as I spend time with my family and reflect on my career. Down the road we’ll have a lot of time to discuss retirement and what’s to come in the future.

For now though, I’m just another retiree in South Florida. I’ll be going to get my senior citizen’s card here pretty soon.