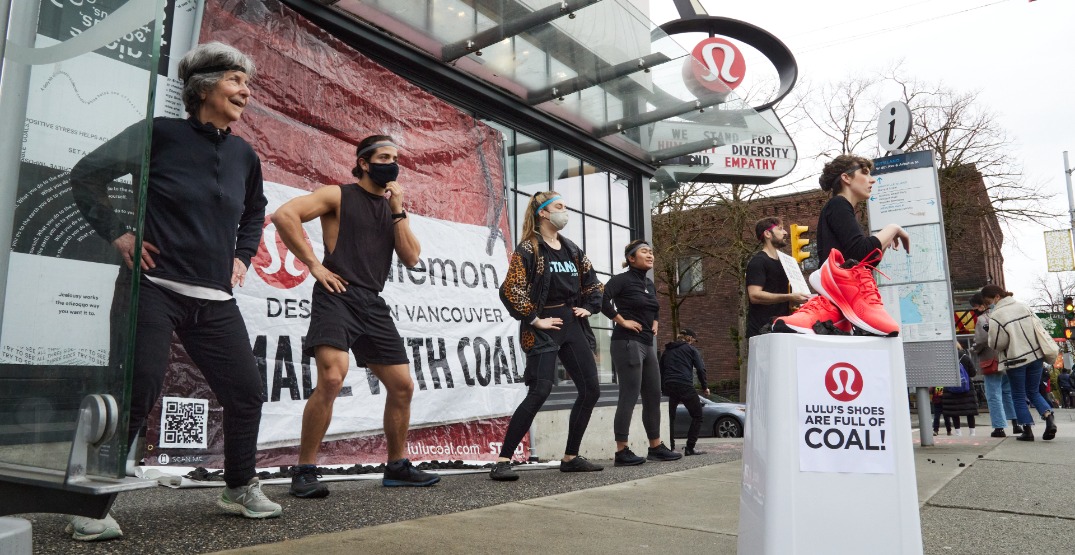 Shortly after the brand debuted a new line of running shoes, locals ran out of patience for Lululemon’s reliance on fossil fuels.

About 10 protestors gathered at the company’s Kitsilano store in Vancouver to demand it make the switch to cleaner energy instead of using coal for power. Signs called for them to “go coal-free by 2023” and declared, “Lululemon: made with coal.”

An analysis conducted by Stand.earth showed Lululemon’s Blissfeel women’s running shoes — just recently released — are made in factories in China that get 66% of their power from coal. Only 9% comes from renewable energy. Meanwhile, most of their stores rely on a coal-powered electricity grid, further contributing to greenhouse gas emissions. 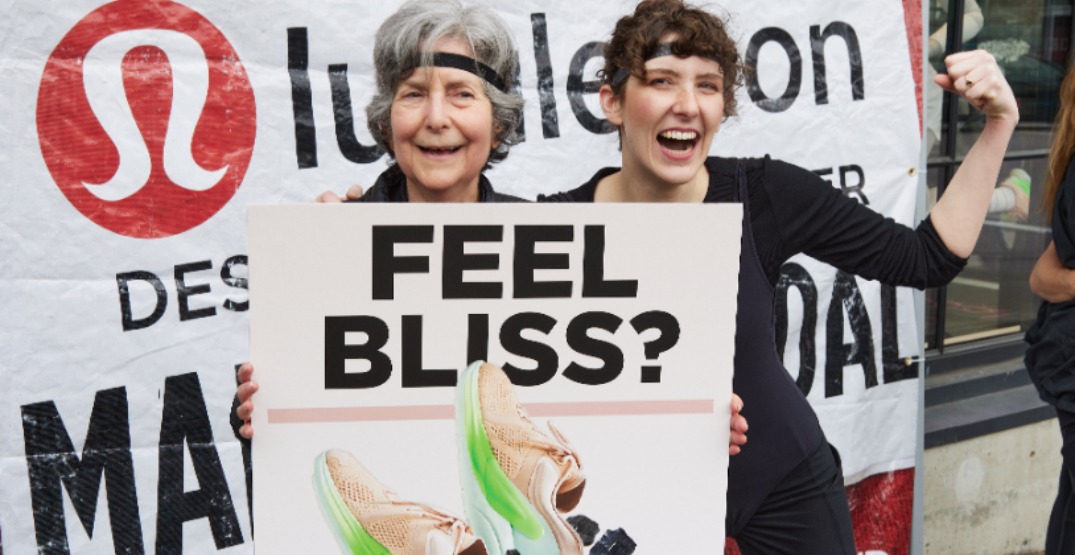 “Amid chants of ‘break up with coal’, activists hosted an aerobics workshop on Lululemon’s climate failures,” says a statement from organizers at Stand.earth.

“Participants did group stretching exercises, traced human footprints on the sidewalk, and spread fake coal in front of the store. Others held banners reading ‘Feel Bliss?’ with an image of coal pouring out Lululemon’s new Blissfeel shoes, while nearby, one of the shoes filled with ‘coal’ was placed atop a white pedestal.” 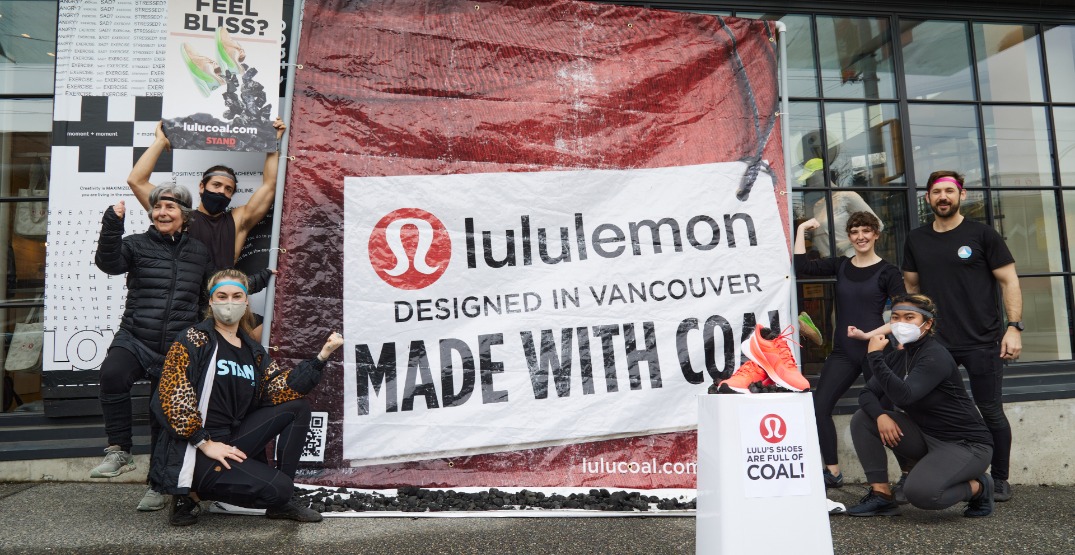 Erdene Batzorig, a Vancouver resident and Digital Campaigner with the Fossil Free Fashion campaign at Stand.earth, says Lululemon should start using clean energy as soon as they can.

“Lululemon’s new line of women’s running shoes might be dubbed the ‘Blissfeel’ for how they feel on your feet, but the coal-powered manufacturing of these shoes is anything but blissful for people and the climate,” said Batzorig.

“This is especially the case for women, who often bear the brunt of Lululemon’s climate and air pollution — especially in countries like China, Vietnam, and Bangladesh — where its products are made.” 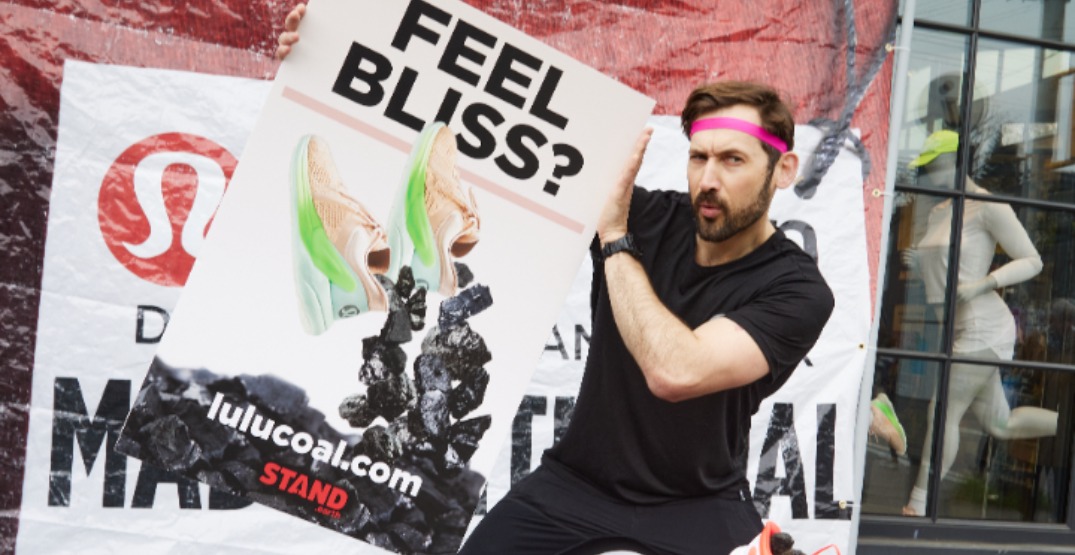 At the same time, Lululemon presents itself as a “healthy lifestyle” brand and sustainability leader.

“Lululemon is notably missing from joint efforts signed by other fashion brands, including competitor Nike, to encourage fashion-producing countries to increase renewable energy,” says the statement.

By relying on coal, organizers say the brand is increasing demand for the resource.

Daily Hive Vancouver reached out to Lululemon for an interview and will update this article. 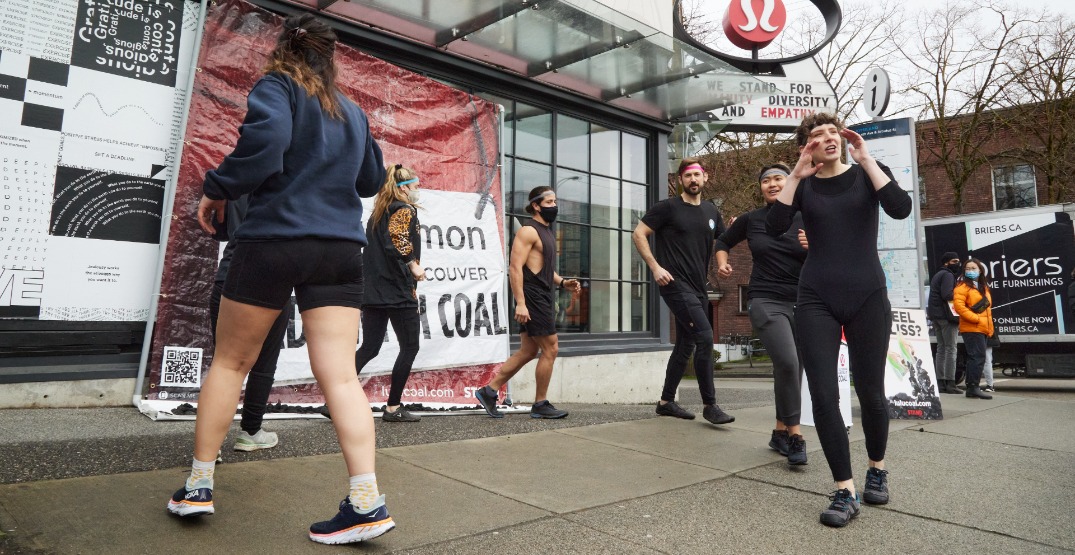 Stand.earth has been asking Lululemon to take more climate action for over a year.

When they put out their Fossil Free Fashion Scorecard to rate fashion companies for their efforts to tackle climate change, they gave Lululemon a D- “for failing to take meaningful action to work with suppliers to increase renewable energy use in its supply chain, phase out coal usage, or advocate for sourcing renewable energy for its factories.”