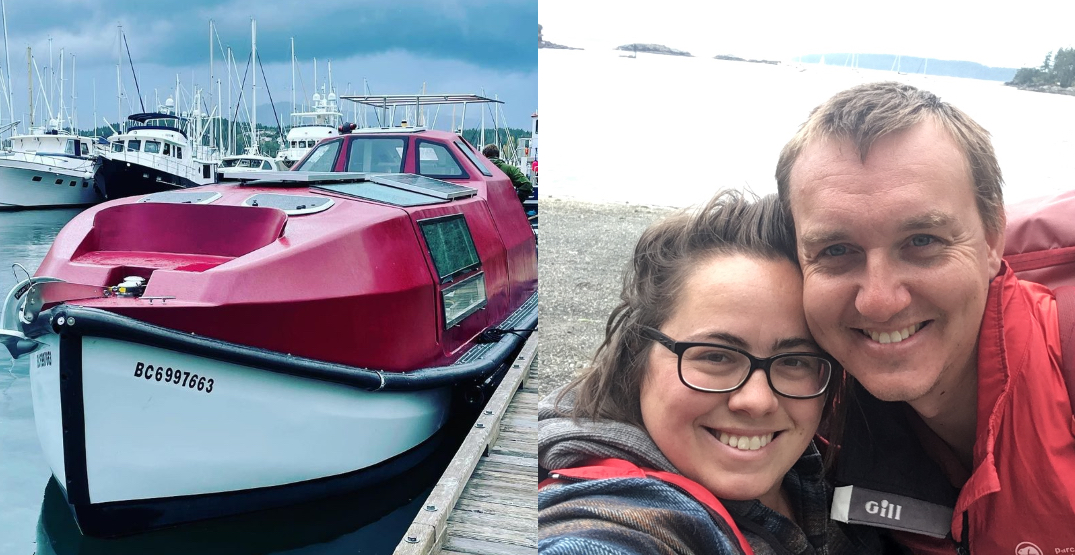 With the cost of living being so high in cities like Vancouver and Victoria, people are looking for alternatives to renting and traditional homeownership.

One Vancouver Island couple is going off the deep end and is in the process of converting an old BC Ferries lifeboat into an electric-powered liveaboard vessel so they can skirt the high cost of rent and housing in the lower mainland.

And, they’re documenting every step on their Living On A Lifeboat journey so you can follow along.

“We’ve both long been drawn to following a slightly unique path, love boats, and love the community that comes with being around and living on boats,” Dani Tate-Stratton told Daily Hive Urbanized by email.

She and her husband Toryn Sundstrom used to have a 29-foot sailboat, but found that it wasn’t suitable for a couple to live on – it was meant for just weekend getaways.

So, they set out to get creative looking for a smaller vessel that would suit their needs.

“Once we found out that lifeboats came out of service and are sold on to new purposes, then realized they are a big, blank slate, it seemed like the perfect solution.”

They ended up finding an old BC ferries lifeboat for sale in Metro Vancouver and snapped it up, got it towed back to Vancouver Island, and called it “Luja.”

Toryn is a machinist by trade and he and his wife have been busy upgrading the lifeboat to get it set up as their new home ever since.

The choice to forge a unique path was driven partly by a desire to have a portable home to explore the Gulf Islands with, but also partly because of the housing situation in Victoria. “I don’t need to explain to anyone how challenging it is to buy here, or even rent,” said Dani.

Victoria is Canada’s third most expensive city for renters, according to liv.rent, where an unfurnished one-bedroom unit is $1,650 per month on average.

Here’s the first-ever episode of their journey with Luja, posted in 2020, and you can catch up on their YouTube channel.

In the future, the couple hopes that Luja will be a comfortable, semi-luxurious, and off-grid vessel powered by solar energy.

“We’d like to be working and living on her without the constant stress of both paying for, and keeping up a house,” said Dani, who wants to see more of British Columbia from aboard Luja.

One day, they dream of sending the boat to Europe so they can explore the continent’s rivers and canals.

“Ultimately, it’s just a great big project with tons of room for creativity and innovation, and who doesn’t love the opportunity to get stuck into something like that?”