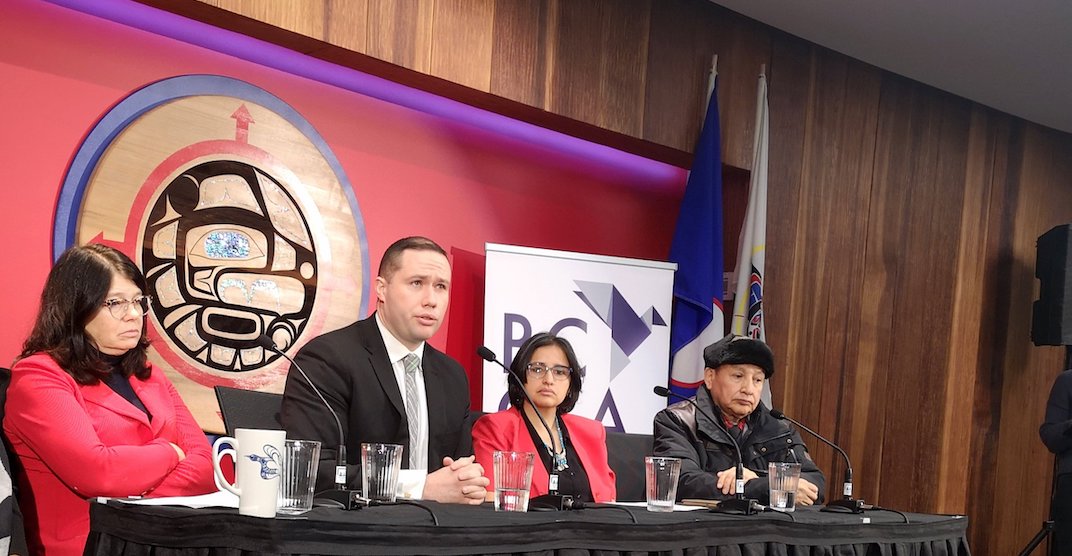 The BC Civil Liberties Association (BCCLA) has filed legal complaints against the RCMP exclusion zone set up outside of Wet’suwet’en territory, on behalf of two individuals.

The “access control checkpoint” has been set up by BC RCMP since Monday, and although RCMP said in a statement they would allow media and persons providing food, medicine, or other supplies through the checkpoint, only certain people were able to get through.

BC RCMP issued a release Monday saying that an access-control checkpoint has been established at the 27-km mark of the forestry road, to “mitigate safety concerns related to the hazardous items of fallen trees and tire piles with incendiary fluids along the roadway, and to allow emergency service access to the area.”

However, the BCCLA is saying that the RCMP did not stand true to its promise to allow entry to those with supplies.

“The BCCLA is filing legal complaints for Delee Alexis Nikal and Cody Thomas Merriman (Wedlidi) to the Civilian Review and Complaints Commission for the RCMP,” said a joint release from the Union of BC Indian Chiefs  (UBCIC) and the BCCLA.

“Both Nikal and Merriman were separately bringing food and emergency supplies but were denied entry and access at the RCMP exclusion zone, in contravention of the RCMP’s own statements and Nikal and Merriman’s inherent Indigenous and Charter-protected rights.”

“We are extremely concerned about the use of exclusion zones prohibiting Wet’suwet’en people, the public, and media from accessing Wet’suwet’en territories,” said Harsha Walia, executive director of the BCCLA in a release.

Walia says the exclusion zone is a violation of both the Indigenous rights and Charter-protected rights of Wet’suwet’en people and their family members.

“The Wet’suwet’en assert continuous jurisdiction and unextinguished rights and land title, and the Charter protects liberty, mobility, freedom of the press, and the right not to be arbitrarily detained.”

A press conference was held at the UBCIC boardroom in Vancouver Wednesday, to address the ongoing situation.

According to Professor Margot Young, from the UBC Allard School of Law, the legal response needs to align with Canada’s commitments under the United Nations Declaration on the Rights of Indigenous Peoples (UNDRIP) at the international level. At the provincial level, “bill 41 (UNDRIP) was passed by our own provincial government last month, and needs to be much more interactive consultative respectful and fully engaged with Wet’suwet’en Hereditary Chiefs,” said Margot at the press conference.

At the press conference, BC Premier John Horgan was criticized for his response to the ongoing situation in Wet’suwet’en.

According to Harsha Walia, of the BCCLA, Nikal and Merriman were both separately denied entry by RCMP on Monday, January 13, and spent approximately three hours each at the RCMP exclusion zone attempting to transport food and critical winter supplies for people at the Gidimt’en camp.

“As they waited in -37 to -40 temperatures, they stayed because they were worried about people at Gidimt’en camp who were lawfully and peacefully asserting their presence on their territories not having food and winter supplies they needed,” said Walia.

In her complaint, Delee Alexis Nikal states, “it is a violation of our rights as Wet’suwet’en to be on our land, and a denial of our laws and systems.”

“The RCMP is claiming and broad and vague powers of public safety despite no stated or identifiable threat,” says Walia.

“Rather, the exclusion zone places Wet’suwet’en people at risk, and their safety at risk, by controlling their access to food, medical supplies and emergency equipment.”

According to UBCIC Grand Chief Stewart Phillip, the provincial government and the RCMP should honour UNDRIP in their decisions and actions.

“For Wet’suwet’en people to be denied access to their own territories as a result of a police exclusion zone smacks of outright racism and the colonial-era pass system sanctioned by the so-called rule of law, which our people survived for far too long,” said Grand Chief Stewart Phillip in a release.