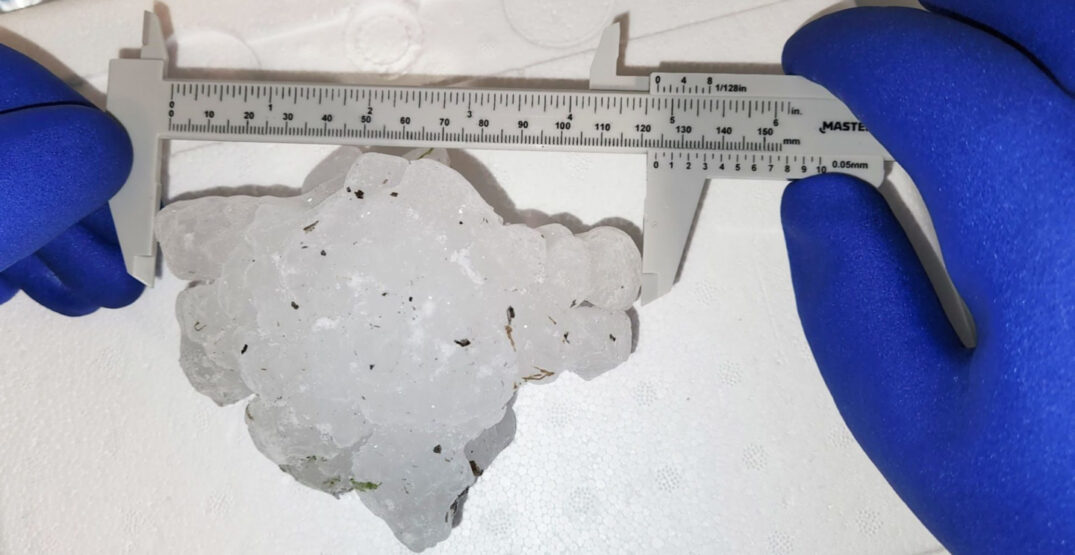 A storm that brought a massive amount of hail in central Alberta that damaged numerous vehicles also dropped the largest hailstone recorded in Canadian history.

The hefty hailstone weighed more than 292 grams, eclipsing the previous record holder of 290 grams collected in Cedoux, Saskatchewan, on July 31, 1973.

The NHP field crew bagged several big stones on Monday. All three of these were weighted in a lab. The one that is 105mm was posted on social media on Monday, but is “only” the third biggest stone that was recovered NW of Markerville, AB #ABstorm #ABwx pic.twitter.com/XqVj4yqc9J

“With a diameter of 123 millimetres, the hailstone has a slightly larger span than a standard DVD (120 mm),” the NHP team said in a news release.

The NHP team also said that the massive grapefruit-sized stone was “only” the third biggest hailstone recovered from the storm that struck Markerville.

The previous Alberta record hailstone fell during the Edmonton tornado on July 31, 1987. That stone weighed 264 grams with a diameter of 104 millimetres.

The stone that fell in the Markerville area may be a record for Canada, but it pales in comparison for the record holder of North America.

The title goes to a hailstone that fell near Vivian, South Dakota, on July 23, 2010, that weighed 879 grams and had a maximum diameter of 203 millimetres.