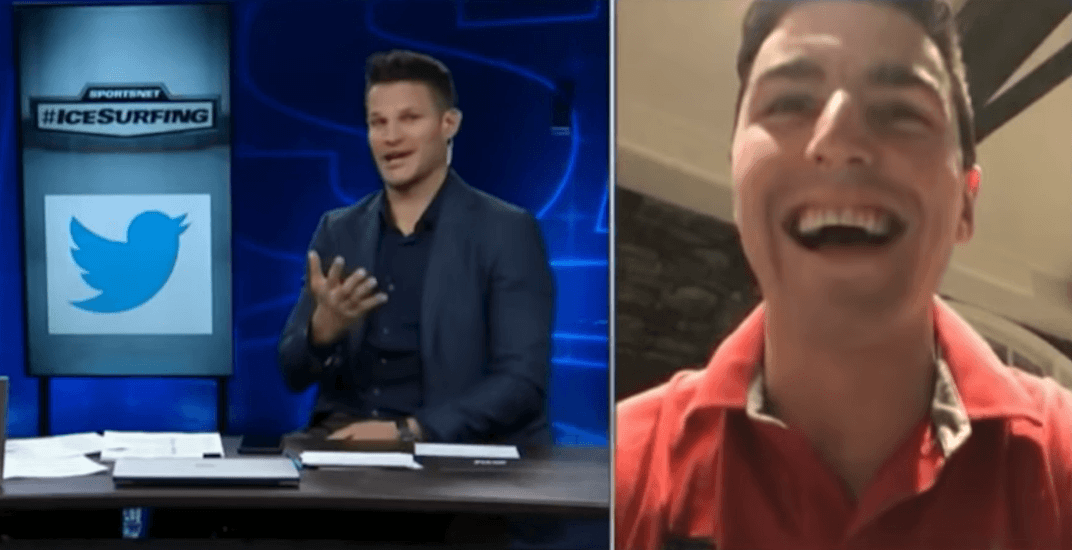 With his pro hockey career now over, former Vancouver Canucks defenceman Kevin Bieksa is showing signs that he may be an even better analyst off the ice.

The highlight of the show for Canucks fans had to be Bieksa’s interactions with a pair of former teammates that came on as guests.

Alex Burrows was first up.

Also recently retired, Burrows is now an assistant coach with the Montreal Canadiens’ AHL affiliate in Laval. Bieksa bugged Burrows about his team’s power play and his haircut, though that failed to get a rise out of No. 14 who was keeping things professional.

Bieksa joked that they were talking to the politically correct “Alexandre,” not “Burr.”

Going down memory lane, Bieksa called Game 7 versus Chicago in 2011 “the highest pressure-filled game I think we’ve ever played.”

“We’re thinking if we lose this game, we’re all getting traded,” Bieska said, adding that Burrows’ OT winner was the most excitement he’s ever had after a goal.

Along with Ryan Kesler, the trio had a tight bond given they came up together from the AHL to the NHL at around the same time.

“We were so competitive and we wanted to get better every day. We would fight in practice all the time. How many times would we have three-on-three down lows, and it would end in a stick-swinging? Or a punch in the head? Or an insult?”

Good thing they won a lot.

Kesler once gave both Bieksa and Burrows the silent treatment for “at least two weeks,” because they were making fun of him behind his back because he was limping due to an injury.

Boys will be boys, I guess.

The legend of Shane O’Brien

Speaking of which, Shane O’Brien joined the show (some of the great stories he told aren’t included in the above video, but we’ve recapped them below).

A former defence partner of Bieksa’s in Vancouver, O’Brien is one of the most legendary partiers that has ever slipped on a Canucks jersey.

“Being a Canadian kid, single in Vancouver living the dream, it was unbelievable,” said O’Brien of his time with the Canucks.

“The limo was always dialled up,” O’Brien added.

After the Canucks lost to the Blackhawks for a second time in the 2010 playoffs, O’Brien had a bunch of his teammates over to his place.

He shared this great story about when the cops showed up:

Bieksa didn’t want to be his roomate

Sometime during their two seasons together in 2008-09 and 2009-10, Bieksa and O’Brien were assigned as roommates on the road.

Bieksa “punted” him though, but O’Brien never knew why. Until now.

“You came home a couple times and fell asleep naked, over top of the covers, with all the lights on and the TV on,” Bieksa explained to O’Brien, who also no longer plays professionally after spending the last two seasons in Europe. “So not only did I have to wake up and turn the lights off in the bathroom, turn the TV off – I don’t know if I actually tucked you in, but you were belly down, naked.

“It was definitely a gong show,” O’Brien, who was with the Flames at the time. “Before the game Hartley pulled all the guys aside and put out all our meatheads… I’m not a big Bob Hartley fan, the guy’s never been punched in the face in his life. He wants to go out and start this brawl.”

Despite a long fighting resume, O’Brien wasn’t part of the line brawl that began the game.

“I wasn’t even on the ice, that’s how much Hartley hated me,” O’Brien said.

As both players remembered the wild incident that ensued, O’Brien had this to say:

“Hey Juice, no word of a lie, if ‘Big Earn’ (Brian McGrattan) doesn’t grab Torts, I got front row seats to Hartley-Tortorella in the visiting dressing room at GM Place. It would have been amazing man.”