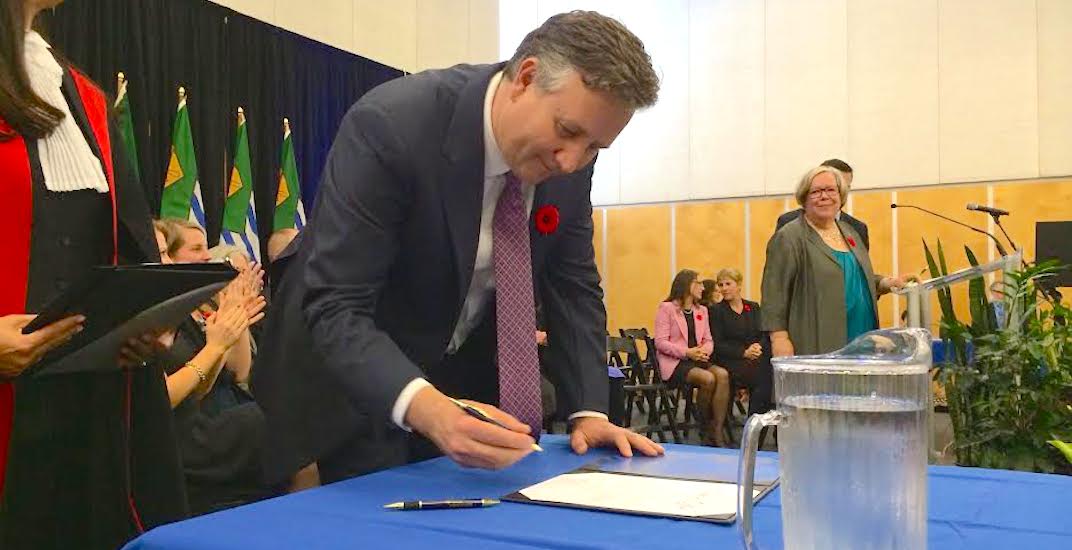 A little over two weeks after being elected Vancouver’s new mayor, Kennedy Stewart – along with a new city council – was officially sworn in on Monday afternoon, at the Creekside Community Centre.

And during his inaugural address, Stewart spoke about what he called an “unfamiliar” political situation in the city.

“An independent mayor, a set of new and renewed political parties, and – like the voters of this city – a council that represents a mixture of ideas, and approaches,” he said.

But, far from being a bad thing, Stewart said the change in this situation “means we can and must think about things differently.”

That, he said, “starts with how we all treat one another; so the key word for me is respect. My mom always reminds me ‘begin as you mean to proceed,’ so I pledge here today to put respect at the centre of my approach, to inform residents and council members of my intentions and to listen to your ideas before making decisions.”

The new mayor said it is up to him and the new council to “serve as examples to our community and to strive to foster an environment of openness and transparency with the goal of building trust right across this city.”

As such, he continued, “I’ll do my best to live by these words.”

As he did in a previous interview with Daily Hive during his election campaign, Stewart noted that cities can either be globalized or globalist.

“Globalized cities are held hostage by external forces that shape civic policy and international standing – they are ships floundering on storming seas.”

Pointing to things like “the embracing and and celebrating multiculturalism and the LGBTQ community,” the “championing” of the four-pillars when it comes to tackling addiction and “leading the way” when it comes to protecting the environment, Stewart said the city has been globalist in the past.

“But being globalist is difficult,” he said. “We are beset by a multitude of challenges outside of our control, so we have a choice to make over the next four years: We can acquiesce to these negative external challenges, or we can view them as an opportunity to show other cities how Vancouver innovates and overcomes. We can and we must be a globalist city.”

Stewart said that in Vancouver, “as in many other cities around the world, our single greatest challenge is the lack of affordable housing and the consequences of our housing crisis ripples out into every part of our civic fabric.”

The mayor said it doesn’t matter “who you are or where you go in this city the stress of unaffordability hangs over Vancouver, stifling our creativity, our energy and our promise of opportunity.”

But, he continued, “it  doesn’t need to be this way; the diversity of views on our council provides a unique opportunity to explore a multitude of ideas of how to solve our affordability crisis and, in turn, show the world it is possible to successfully the address this problem.”

Stewart said that in turn, and by working together, the city can “overcome” globalizing forces, make Vancouver an even more globalist city, and “provide a beacon of hope for the world.”

To that end, Stewart said he wants to build a Vancouver that leads in livability, social justice, economic development, tackling climate change, cultural production, and fun.

“We want to have fun here,” said Stewart. “We want to stop talking about housing all the time and have fun.”

He said this is possible because “we’ve got everything we need: wealth, talent, intelligence, diversity and opportunity.”

And while he’s excited about all the work and opportunities that lay ahead, Stewart also took a moment to acknowledge what he called “deep structural problems that we’ll all have to work hard to overcome.”

Calling it a “tremendous outcome” Stewart noted that the new city council has a record-setting eight women and pledged to make the city more “woman-friendly.”

Still he said, the council does not reflect the true diversity of the city, something he said “deeply concerns” him.

“As such, to the over 50% of Vancouver’s population whose ancestry is not represented, I make this promise: I will do everything I can to reach out to your communities and make sure the decisions we make at city hall take your experiences and realities into account,” he said. “I’ll do all I can to ensure fair representation on city advisory boards and hearings. ”

Stewart also gave a nod to the previous city council for its role in getting Vancouver designated as a City of Reconciliation.

“I am committed  to a sustained relationship of mutual respect and understanding with local First nations and the urban Indigenous community,” he said. “Not only do we on city council need to work together and respect each one another, but the same is true for everyone in our city; it is vitally important that public discourse in our city be respectful, be open, and curious.”

Wrapping up his speech, Stewart said he looks forward to making this happen and  “getting down to work to make Vancouver a city that works for everyone.”