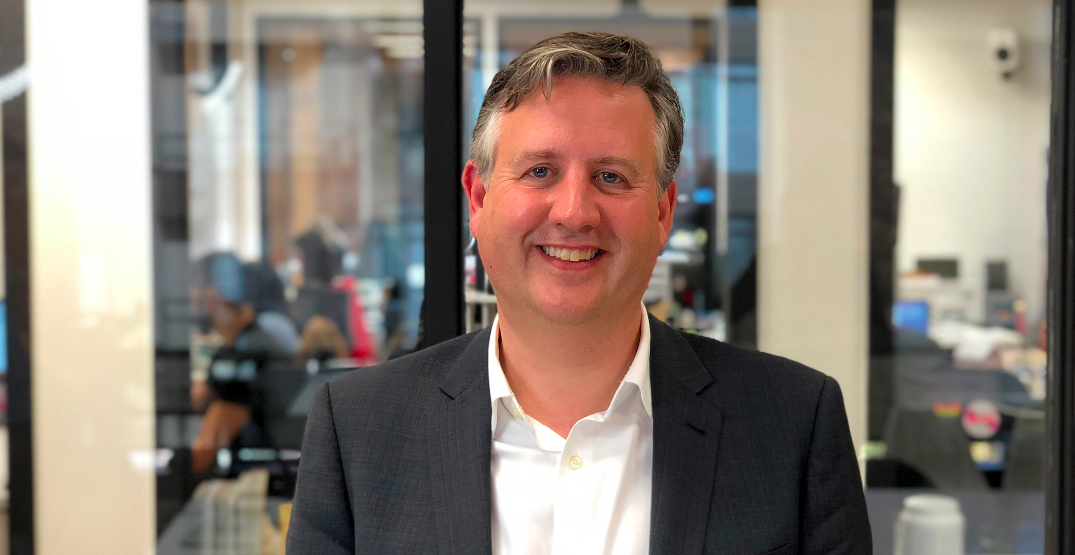 And while cheers of excitement and celebration filled The Waldorf – where Stewart held his election night party – after the final results were released, Stewart’s first action when he got home after was decidedly more subdued.

“I had a bowl of Cheerios and went to bed,” he said.

The city’s new Mayor-elect recalled the moment during a sit-down interview with Daily Hive on Monday morning, less than 48 hours after the polls closed.

He spoke about the reality of his new position, as well as the down-to-the-wire finish to secure it.

“When the first polls came in, it was so close, that I thought, ‘okay, this is going to be a rough one,’ but I’m used to it,” he said. “On that night, it was right up to the last poll. That’s why we waited to do anything; it took longer than I had hoped for, but there you go.”

Now, with the challenge of the campaign behind him, Stewart faces a whole new set of challenges from the mayor’s chair. The most pressing, he said, being housing.

“If we can get that going in the right direction, then a lot of other things will come together,” he furthered.

Stewart noted that during the campaign, a variety of developers – both big and small – “kind of caught on to the fact that we have to get more rental housing here, and it has to be more affordable.”

Federally and provincially, he added, “everybody has recognized that this has to be tackled and the status quo won’t do.”

As such, “it’s up to us: the shovel-ready project kind of thing. We have to do that side of it and I think there’s a willingness on council to do it as well – everybody campaigned on this issue.”

During his campaign, Stewart promised construction of 85,000 new homes over the next 10 years, as well as tripling the Empty Homes Tax, and 100,000 square feet of affordable studio space for “creators.”

While he noted that the “devil’s in the details,” Stewart believes “there’s the broad agreement that we have to move ahead with affordable rentals run by non-profits and that’s really the only way forward. My job is to make that happen.”

Although he ran as in independent candidate, Stewart will also have to work with a mixed-party council – a task that he says he’s up for, thanks in part, to his time as a federal NDP MP.

“I thought parliament would be hard that way until I started trying different approaches,” he said. “I learned really early on in that job that you just have to wipe off the partisan colours and you have to think of politicians as individuals who have their own goals to accomplish, so that’s how I’m looking at this council. I do think it could be really different, really positive.”

He also spoke about the lack of diversity on council, saying it’s a product of the electoral system (at-large representation), which Stewart said he’s been against since writing his masters thesis on the subject in 1995.

“We used to have wards here and got rid of it and brought in at-large system, which really works for old white folks,” he furthered. “There’s no minorities, candidates in particular areas cannot get elected,  and if you look at it, consistently, folks of South Asian descent –even if they’re in the party – always fall at the bottom of the list.”

This, he said, is due to voter bias, “so that’s why you need neighbourhood constituencies or proportional representation to even that out.”

Asked how he would actively make sure that diverse voices from all backgrounds were being heard by city council, Stewart responded: “We’ll just have to make sure that the committees, both the ones on council and the ones that are more public are filled with diversity and to listen to them.”

As mayor, Stewart said it’s his job to make sure he has mechanisms from his office to ensure the public is being included.

Noting that eight women were elected to council, Stewart speculated that “we could have more of a feminist agenda, or more of an equity agenda, so that cuts across party lines.”

With cannabis being legalized in Canada the same week as the election, Stewart is in full support of fostering and growing the industry in the city.

“Like housing, we tend to be focusing on the negative side of this, as far as licensing and shops shutting down,” he said. “But look at the potential here – we’ve got an accepting culture, we’ve got expertise, we already have a cluster, we could get research and development.”

Stewart said “a lot” of companies are looking at current prospects as well.

“We could get the research and development and instead of hippies on street corners, it could be people in lab-coats doing pharmaceutical research.”

That, he said, “is what I mean about changing our attitude: don’t worry about a few retail stores, think about what we could do here in the city if we go about this.”

“I’d be very pro-cannabis research and development. I think there’s money looking to land and I want to go catch it.”

The inauguration ceremony for the newly elected officials happens November 5, with details to be released closer to the date.