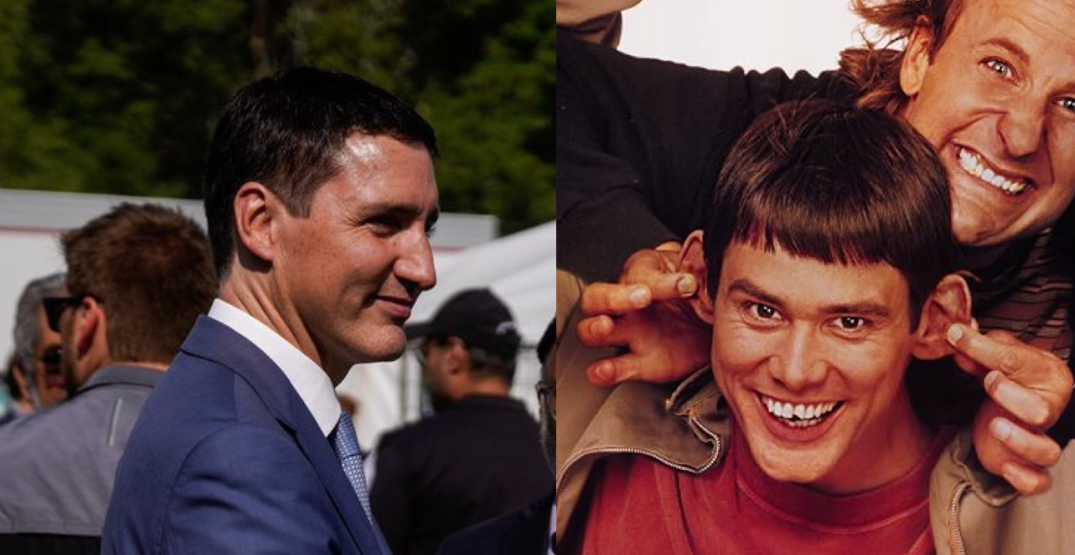 Prime Minister Justin Trudeau was seen sporting a fresh ‘do in Chelsea, Quebec over the weekend, sparking comparisons to another fellow Canadian.

After trading in the shaggy hair and beard for a cropped cut and clean-shaven face, many compared Trudeau’s new look to Jim Carrey’s character Lloyd Christopher in Dumb & Dumber. You can’t unsee it.

“It looks like his mom took the hair clippers to him and used a bowl for the edges,” one user wrote. “Someone gave him the haircut he deserves,” wrote another before Carrey’s name was throw in the mix.

Bahahah he looks like Jim Carey in Dumb and Dumber! How suiting! https://t.co/aOAINLWoVE

Trudeau got himself a new haircut. “Well G’day mate” 🤣 pic.twitter.com/QRIxKijrH4

Justin Trudeau’s haircut is trending, which can only mean one thing:

So a man walks into a barber and shows them photos of Forest Gump, Dumb and Dumber, and PeeWee Herman. This is the result: pic.twitter.com/Xx1tLEblFe

#JustinTrudeau @iamjohnoliver it’s been too long people to tell him what fashion is from Johnny Depp’s Evil Twin to a 90’s boyband reject and Jim Carrey from Dumb And Dumber pic.twitter.com/G1JOOJIdsr

This isn’t the first time Trudeau has riled up the internet with his grooming.

Twitter had a field day back in 2020 when he grew a thick salt-and-pepper beard and in 2017 when he briefly rocked a goatee.